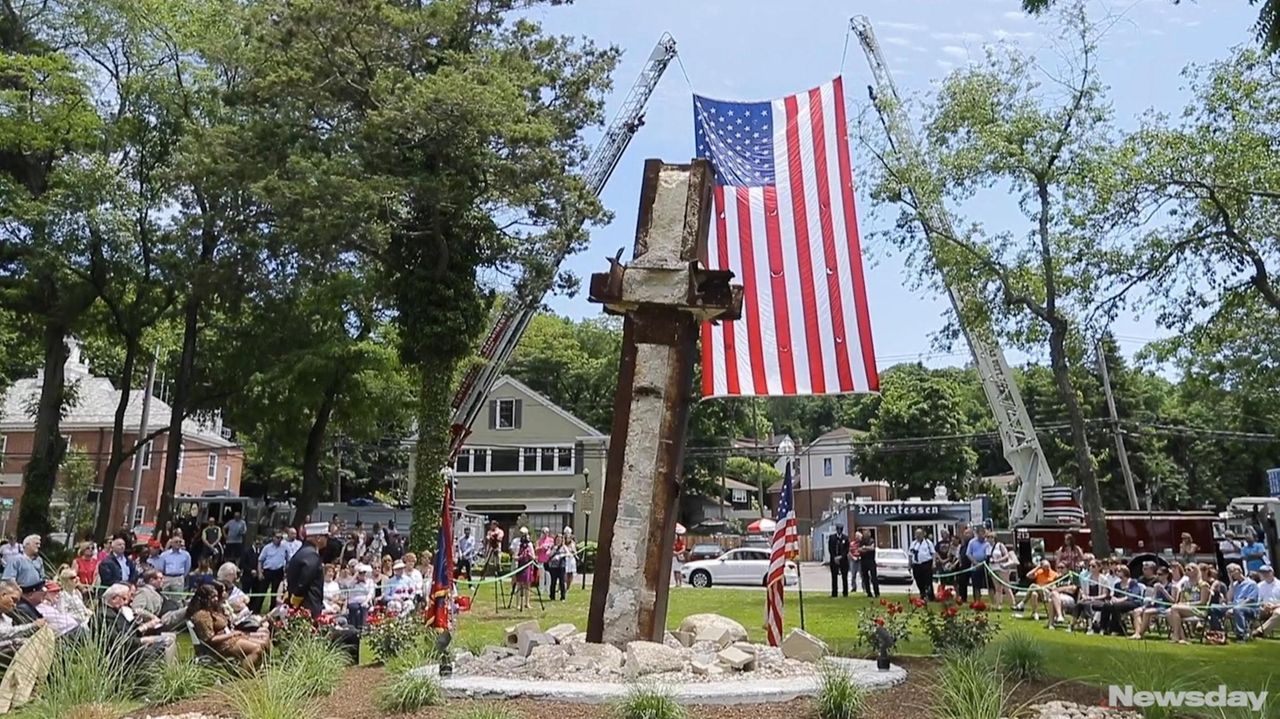 Dan and John Martin knew they wanted to follow in their father’s footsteps by becoming firefighters.

Peter Martin, a Miller Place resident, was a lieutenant in the New York Fire Department’s Rescue 2. He died at age 43 while responding to the Sept. 11, 2001, terrorist attacks at the World Trade Center.

“I definitely admired what he did before [his death],” said Dan Martin, 30. “I definitely had some inspiration afterward.”

On Saturday, the Martin brothers, both members of the Cold Spring Harbor Fire Department, attended the dedication of a Sept. 11 memorial across the street from department headquarters.

The memorial in Cold Spring Harbor Firemen’s Park includes an 18,000-pound piece of steel from the 62nd floor of the World Trade Center’s Tower One.

The Port Authority of New York and New Jersey gave the 17-foot-long steel piece to the Cold Spring Harbor Fire Department, which it requested through the 9/11 World Trade Center artifacts giveaway program in 2016.

The metal was transported from Kennedy Airport to the Town of Huntington Recycling Center on a flatbed trailer.

The Port Authority gave away more than 2,600 artifacts recovered from the World Trade Center such as building steel, vehicles, PATH cars and other objects, to communities in every state and to 10 other nations from 2010 until the program ended in 2016, according to the agency.

“This is why we have this memorial — that we will never forget those who perished on Sept. 11, that we will remember the sacrifices of those who rushed into buildings to fight the fires, to rescue those who were trapped, and the thousands of people who simply went to work that morning and never returned home,” said Thomas Buchta, chairman of the Cold Spring Harbor Fire Department’s 9/11 Committee.

The Cold Spring Harbor memorial honors the 2,753 people who died at the World Trade Center. Forty-two of them were residents of the Town of Huntington, including three New York firefighters and one New York City police officer.

“And now, 17 years later, I think about whether we’ve slipped back into everydayness,” he said.

The site also includes three saplings from a Callery pear tree that survived the attack at the World Trade Center.

Now called the Survivor Tree, it was severely damaged in the Sept. 11 attacks, but was relocated to a Bronx nursery for rehabilitation and then returned to the National September 11 Memorial & Museum in 2010.