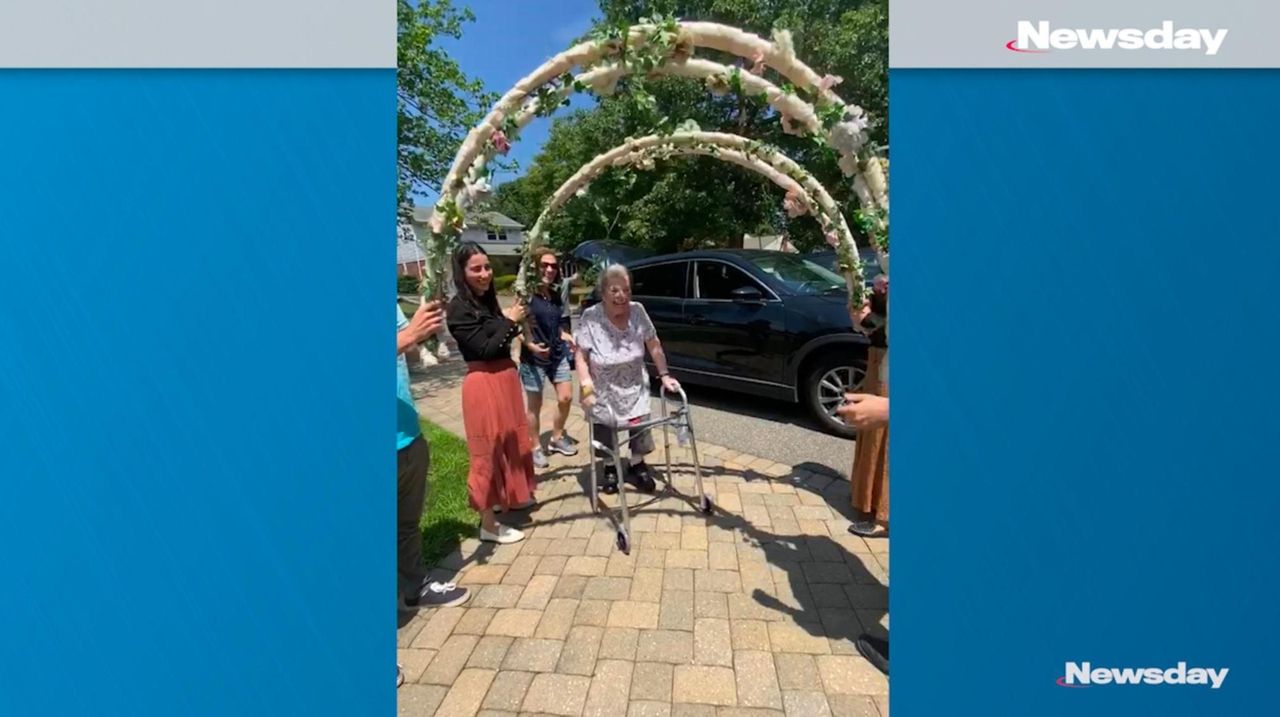 Connie Wurem, 82, of Plainview, was hospitalized May 22. On July 28, she finally came home. She tested negative for COVID-19 four times, had pneumonia twice and was intubated and put in a medically induced coma, her family said. Credit: David Wurem

Connie Wurem's family says the 82-year-old grandmother's survival is nothing short of a miracle.

They have gone from contemplating her funeral to celebrating her return to her home in Plainview after 67 days in the hospital and a rehabilitation facility.

The trouble became apparent on May 22, when Connie Wurem arrived at the Kew Gardens, Queens, home of her son, Ira Wurem, and wasn't able to walk up the three steps leading to the house.

"That was very unusual behavior," Ira Wurem said during a phone interview Tuesday. He called a friend who is a paramedic "to check my mom's vital signs. When he did so, he said her ... [oxygen] level was 85 percent, which is significantly lower than where it needs to be." Her doctor was called and he advised taking her to NYU Langone Medical Center in Manhattan.

An ambulance was summoned.

"This is in the heart of COVID," Ira Wurem said of COVID-19, the disease caused by the coronavirus. "They all came in protective suits. I wasn’t allowed to go into the ambulance. My mother had to go on her own," because of the protocols put in place during the pandemic to try to limit the spread of the highly contagious disease.

Connie Wurem was tested for the coronavirus in the emergency room, her son said, and found to be negative. "They tested her four times [for the virus] between the emergency room and ICU," and the result was negative each time. But, Ira Wurem said, "It absolutely presented like COVID-19."

And like many COVID-19 patients, Ira Wurem said his mother was ultimately placed on a ventilator as her ability to breathe on her own deteriorated. She developed pneumonia — twice — and was placed in a medically induced coma, her family said.

She went into a "downward spiral," her son said. "The doctors thought the situation was really bleak. We were preparing for a funeral, to be honest."

Connie Wurem's eldest daughter, Maxine Kugelman of Staten Island, said: "When this first happened and they intubated her and we had an opportunity to see her, it didn’t look good."

"Every night, my sister’s family [Barbara Knoll of Plainview], my brother’s family — we would have a prayer service," Kugelman said.

When the hospital relaxed visitation rules and family members were able to visit — one at a time — Kugelman said, "I had tears in my eyes. I was just sitting by her side, talking to her, holding her hand. I was praying. My older son just got engaged in February. I would tell Mom, 'You have a lot of joyous occasions to look forward to, so you have a lot in life to look forward to. So you got to fight this fight.' And she fought it. And we’re very thankful ... 67 days later, she’s home."

One of her 11 grandchildren, David Wurem, 21, of Kew Gardens, said that that Friday in May when his grandmother was rushed to the hospital, "We thought that was going to be potentially the last time saying goodbye to her."

But on Tuesday, Connie Wurem arrived at her Plainview home. A family video shows her making her way on foot, with the aid of a walker, triumphantly under flowered arches held up by family members as a recording of Frank Sinatra singing "My Way" played. Family members were tested for the virus, Ira Wurem said, to ensure that they wouldn't infect the family matriarch at the celebration.

Asked about her memories of that long stretch of hospitalization, Wurem, speaking by phone, had few memories but one.

It was during therapy at Rusk Rehabilitation at NYU Langone Health that Wurem gained confidence in her ability to overcome. "My therapist, Jackie, and my occupational therapist, Allison, had confidence in me. I couldn’t even stand. And they said, 'Yes you will.' Today when I left, we were all in tears. I’m a fighter I guess. I was able to walk, little by little. The steps was the hardest. I made it. That’s all I could say."

Wurem thinks she survived because "I’m a fighter. And I wasn’t going to give up because where there’s life, there’s hope. And tell anyone else who's ever in a coma not to give up. You never know."

As a three-year cancer survivor from Stage 4 melanoma, she had experience with overcoming long odds. "That was a miracle in is own right," her son said of her recovery from cancer, praising the immunotherapy treatment she received that beat back the disease.

He remembered when it took his mother 30 minutes to stand up at the beginning of her rehabilitation. "Today, she could walk over 200 feet using a walker ... [for] support," he said. "She's on the road to mending, getting better. It’s unbelievable. It’s miraculous."