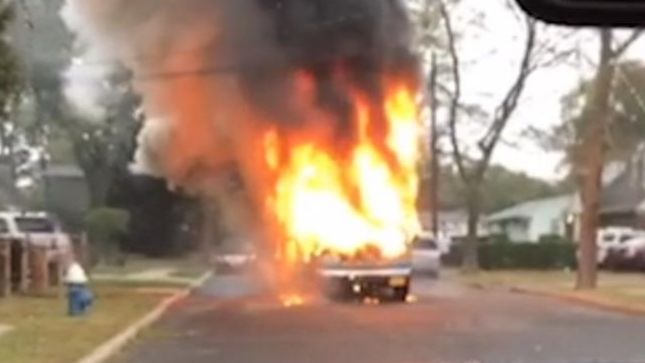 A school bus was gutted by fire Monday, Oct. 9, 2017, on a street in Roosevelt, Nassau County police said. The bus driver noticed smoke and evacuated six special-needs passengers who were in the vehicle before it went up in flames at Bennett Avenue and St. Francis Street about 7:51 a.m., police said. Credit: Jim Staubitser

Six people with developmental disabilities escaped from harm Monday morning when their bus driver pulled them off the smoking vehicle before it burst into flames in Roosevelt, police said.

“We saw the pictures; it was a very scary situation,” said Anita Dowd-Neufeld, chief administrative officer of Family Residences and Essential Enterprises in Old Bethpage, where the bus, operated by Guardian Bus Company, was headed.

The driver of the bus noticed smoke and evacuated the six occupants onboard at Bennett Avenue and St. Francis Street about 7:51 a.m., Nassau County police said.

“He got all the kids off, and while waiting for a pickup bus, his bus went on fire,” a police spokeswoman said.

There were no reported injuries, the spokeswoman said.

The second bus took the passengers, all of whom are over 18 years old with developmental disabilities and live in western Nassau County, to their program in Old Bethpage. FREE, a nonprofit, helps individuals with disabilities, offering day programs, recovery services, education and after-school support.

Dowd-Neufeld said the six were checked out by a nurse and had the opportunity to meet with a psychologist if they wished. They resumed their normal routines when they arrived at the program.

“When they came in, they were just like, ‘Yeah, this happened, you’re not going to believe what happened on the bus,’ ” Dowd-Neufeld said. “It was more the staff that was really shaken up by it.”

Corey Muirhead, a Guardian director, said in a statement that the company was relieved no one was injured and that it was cooperating with the state Department of Transportation to find the cause of the fire. The statement did not release the name of the driver but credited his training for the good outcome and described his actions as “nothing short of heroic.”

The state Department of Transportation said Guardian’s buses are inspected twice a year. If a “significant defect” is found, the bus is taken out of service for repairs and must be reinspected before it’s allowed back on the road, said DOT spokesman Stephen Canzoneri. He said for the 2016-17 fiscal year, Guardian’s out-of-service rate was 7.8 percent; the goal is for all companies to be below 10 percent, Canzoneri said.

Dowd-Neufeld, who said FREE has only had a contract with Guardian since August, said she did not know the identity of the driver but wished to thank him.

“Thank you for getting them out in time, saving their lives,” she said. “It’s really heroic.”

A similar incident occurred in April 2016, when a Guardian Bus Company bus caught fire en route to Merrick Avenue Middle School. About a dozen students and the bus driver escaped injury in that incident.