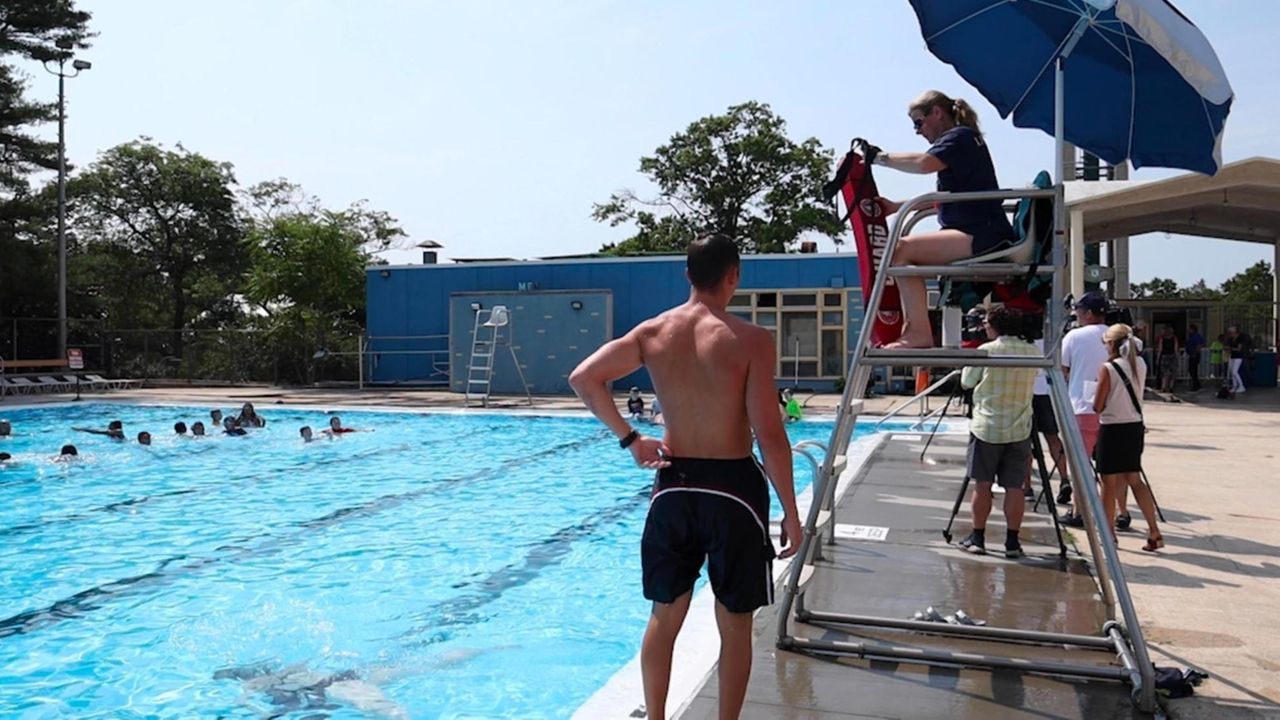 On Thursday, Nassau County Executive Laura Curran and Stew Leonard Jr. and his wife, Kim, urged parents to make sure someone keeps an eye out for children when they're near pools. Credit: Howard Schnapp

It can happen in an instant.

That's the message Stew Leonard and his wife Kim, owners of Stew Leonard's supermarkets, wanted to make clear at a news conference hosted by Nassau County Executive Laura Curran Thursday morning alongside the pool at Christopher Morley Park in Roslyn.

Their 21-month-old son, Stew III, drowned during what his parents called a momentary lapse in supervision as they prepared for their daughter's birthday party.

"We never took the time," Kim Leonard told those in attendance, "to say to each other, 'You're watching him?' That lack of communication cost our son his life."

"It's hot, it's humid, people want to go into the pool," Curran said, noting residential pool permits are up in Nassau, are up on Long Island. "It's really important to stress pool safety, to stress water safety. Three-quarters of drownings [involving children] happen in residential pools . . . If you're at home, you are the lifeguard. That's why it's important if you're at home to never let your child out of your sight."

The national organization Stop Drowning Now said 10 people drown every day in the United States, about 3,400 a year. Drowning is the No.1 cause of death for children aged 1-4, according to the organization. "No one is drown-proof, and drowning doesn't discriminate," its website said.

It is estimated 320,000 drowning deaths occur each year, worldwide.

About 87% of all accidental drownings of children under age 5 occur in residential pools, hot tubs, ponds and fountains, Stop Drowning Now said.

"We're surrounded by water here on Long Island," Stew Leonard said Thursday, adding: "That's the reason we're here. We had this tragedy happen to us."

As a result of the death of their toddler son on Jan. 1, 1989, the Leonards began the Stew Leonard III Water Safety Foundation. The organization has raised more than $2 million toward water safety awareness and education, including lifeguard training. It also provides 10,000 free or low-cost swimming lessons to children each year.

A child doesn't need to get in over their head to be in over their head. A person can drown in as little water as takes to cover your nose and mouth, according to Stop Drowning Now. And, as Stew Leonard said, provide life jackets or water wings if you're on or near the water.

The Leonards have sold more than 225,000 copies of "Stewie the Duck Learns to Swim," a book about children and water safety. All proceeds go to the charity, they said.

There's also a mobile app called "Stewie the Duck" available on iTunes and Goggle Play for a free download.

"How old should your child be when they learn to swim?" Stew Leonard said. "The sooner the better. First, teach them to float . . . Most children fall in our their faces. If they can just learn to roll over on their back, it can save them."