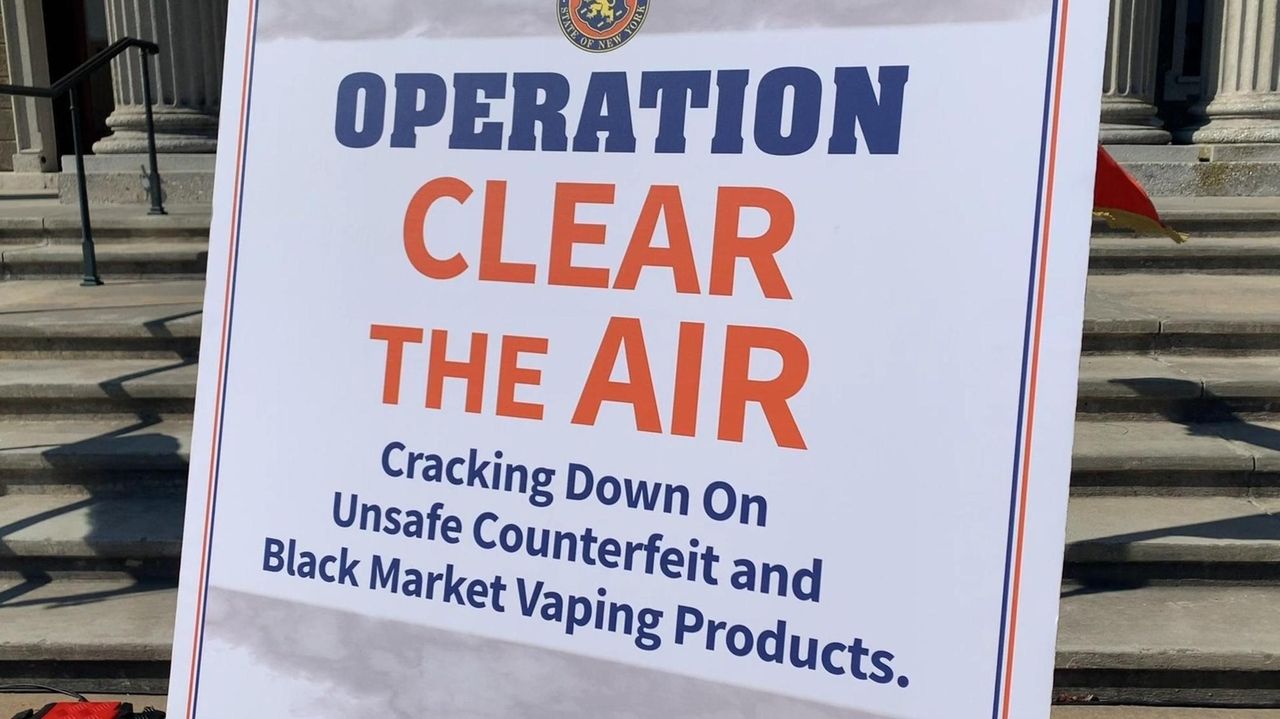 Nassau County investigators said Thursday they are cracking down on the illegal sale of counterfeit e-cigarettes and vape products, performing sweeps of stores and fining operators up to $5,000 per violation. Credit: Howard Schnapp

Nassau County investigators are cracking down on the illegal sale of counterfeit e-cigarettes and vape products, performing sweeps of stores and fining operators up to $5,000 per violation, officials said Thursday.

County investigators from the Department of Consumer Affairs have visited about 70 convenience stores, gas stations and other businesses since the sweeps began two days ago, County Executive Laura Curran said Thursday at a news conference in Mineola.

“We don’t want anyone to vape, but if they do, we don’t want them taking these products into their bodies,” Curran said. “We have a responsibility to enforce the law and protect the health and safety of our residents.”

The investigators have issued 15 violations to about a dozen stores in what officials named "Operation Clear the Air," said county Consumer Affairs Commissioner Gregory May. Stores are issued one violation per flavor of the counterfeit vape products.

New York became the first state to ban flavored e-cigarettes last week, an emergency measure that will not be enforced until Oct. 4.

May would not identify the name and locations of the stores where the violations were issued, saying that the investigations continue. But he said investigators had visited stores in Hicksville, Rockville Centre, Baldwin, Freeport, Mineola and Oceanside.

“We consider this an unconscionable and deceptive trade practice,” May said.

Vaping has been linked to about 800 incidents of lung illnesses, and several deaths, nationwide, according to the Centers for Disease Control and Prevention. Although the direct cause is still unknown, national health officials have said the counterfeit vape products may be associated with these illnesses.

Several of these boxes of vape cartridges were altered with counterfeit stickers intended to falsely represent that the products were approved for sale in the United States, Curran said.

Underneath those stickers was an illustration of a skull and crossbones, the warning symbol used for such products in Canada. Another clue for consumers, she said, is that the packaging has writing in both English and French, she said.

Officials are especially concerned about the sale of these vaping products — some that come in such flavors as mango and cucumber — to young people.

Juul said last November that it would no longer accept retail orders for flavored products. That company announced Wednesday that CEO Kevin Burns would step down and be replaced by a senior executive from tobacco giant Altria.

Any resident who purchases or sees these counterfeit products can call the county Department of Consumer Affairs at 516-571-2600.