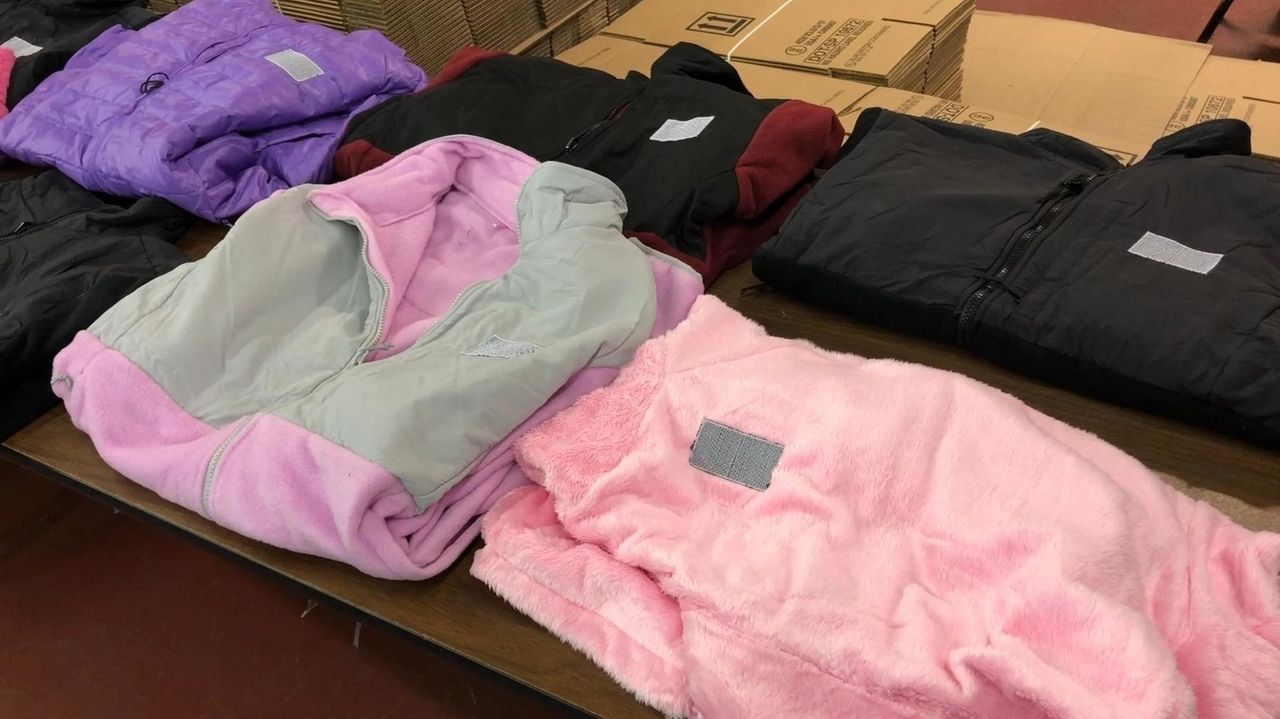 Nassau County District Attorney Madeline Singas, on Wednesday in Westbury, speaks about counterfeit jackets seized by the Nassau County district attorney's office. The bogus logos will be removed or covered from the clothing so they can be distributed to local charities. Credit: Howard Schnapp

Seized counterfeit goods are creating jobs for people with disabilities and aid for struggling individuals under a Nassau County District Attorney program.

The fleeces are being donated to 110 groups, from soup kitchens to homeless shelters, from Suffolk to Queens.

“People will have warm jackets,” she said.

Charity probably was not what drove Guosheng Hu, of Queens, who was arrested in 2016 after more than $1 million of fake designer goods were discovered in the New Cassel warehouse he had leased.

One of Nassau’s largest counterfeiting busts came to light because Hu’s landlord obtained an eviction warrant after his tenant fell behind on the rent.

Hu pleaded guilty in January 2017 to a felony — trademark counterfeiting — but failed to appear for his April sentencing, according to court documents.

E-commerce makes it even easier to sell counterfeit goods, which violate trademarks and might harm consumers, the U.S. Government Accountability Office said in January, adding 20 of 47 items it bought from third-party sellers were fake.

Before Hu’s fleeces could be donated, they underwent safety tests, including flammability, Singas said. Until New York State changed its business law two years ago, such counterfeits would have been destroyed, her office said.

Three of Hu’s four “high volume” embroidery machines that stitched false labels on as many as 16 million items of clothing were donated to TRI Business, where workers use them to cover the logos with mazelike patterns.

“I don’t view it as embroidery; I view it as art with string,” said Josh Mirsky, 25, of Jericho, a senior production assistant who is on the autism spectrum. “Basically, it’s like painting in string form.”

The computerized machines’ needles can be dangerous so the employers first had to determine whether their workers could handle them, said Alex Panes, head of embroidery at Spectrum.

“In this environment, because so much government funding has decreased, a lot of nonprofits are trying to find corporate partners,” he said.

“This business really fell into our lap.”