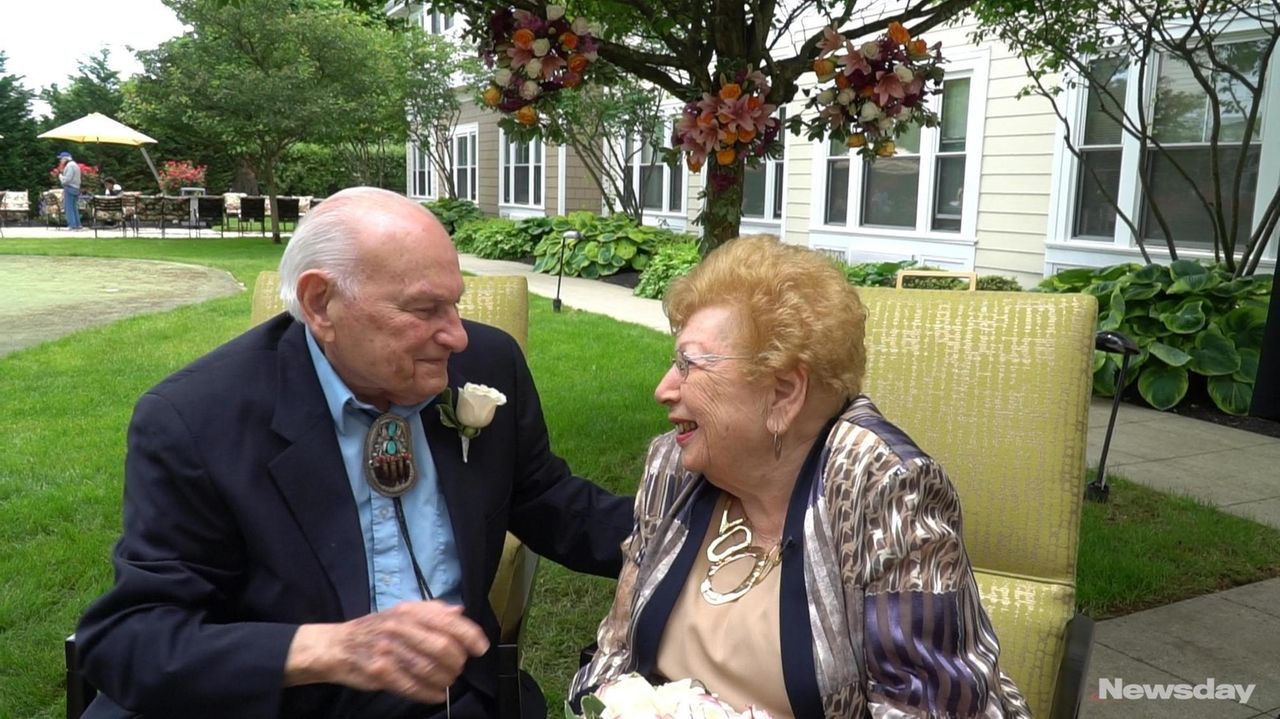 The bride wore slacks and a colorful jacket instead of the ornate lace gown she had worn 70 years ago.

She and her husband sat instead of stood after walking down the aisle.

But looking at each other after renewing their vows, Helen and Martin Inwald said they felt the same as they had on their wedding day.

“I do see a young man,” Helen Inwald, 91, said of her husband. “He’s still cute. He still has that wonderful sense of humor.”

The Inwalds renewed their vows Thursday, on Martin’s 95th birthday, in front of their friends and more than a dozen family members at the Bristal Assisted Living at North Woodmere.

Guests were seated in the courtyard and the couple’s great grandchildren spread rose petals along the aisle. As Helen gripped a bouquet of white roses, the two exchanged the vows they wrote themselves.

Helen vowed not to laugh when Martin sings in the shower and not to cut out articles from The New York Times before he has a chance to read the issue. Martin vowed not to hog all the blankets and to every once in a while take Helen out to dinner.

They both vowed not to flirt with anyone else but each other.

“They’re an inspiration to all of us,” said Danielle Sarno, the Inwalds’ granddaughter, who traveled with her family from Boston for the ceremony. “I’m so glad we were all able to be together to celebrate them.”

They were married Dec. 19, 1948, in front of 175 guests in Brooklyn. It was during a snowstorm, Martin recalled, and he wore a tuxedo and top hat.

This time around, the ceremony took place on a temperate spring day and Martin wore a navy blue suit with an elaborate bolo tie featuring heavy pieces of turquoise and bear claws. They didn’t suffer from wedding-day jitters — Thursday’s ceremony was filled with laughter.

“It was a more serious event,” Helen said of her wedding day. “Now it’s time for fun.”

The couple were first introduced to each other by a neighbor in Crown Heights. For their first date, Martin took Helen to a movie in Manhattan followed by dinner at a French restaurant. He said he had mapped out precisely how many steps it took to reach the restaurant from the theater — he wanted everything to be perfect.

Martin, a retired civil engineer, and Helen, a retired teacher, raised their three sons in Valley Stream, where they lived for 64 years.

“Our parents are the real deal,” said Scott Inwald, 59, of Prospect Heights. “They still hold hands and are still very in love.”

When asked their secret to a successful marriage, the couple cited the four Cs: compromise, cooperation, consideration and compassion.

“You have to have respect for the other person,” Helen said. “In our case, I have the utmost trust and respect for Martin, cause he’s a great companion. We’ve been all over the world, and it’s always been fun.”

Martin said he’d like to add an R as well, for romance. He then kissed his wife.