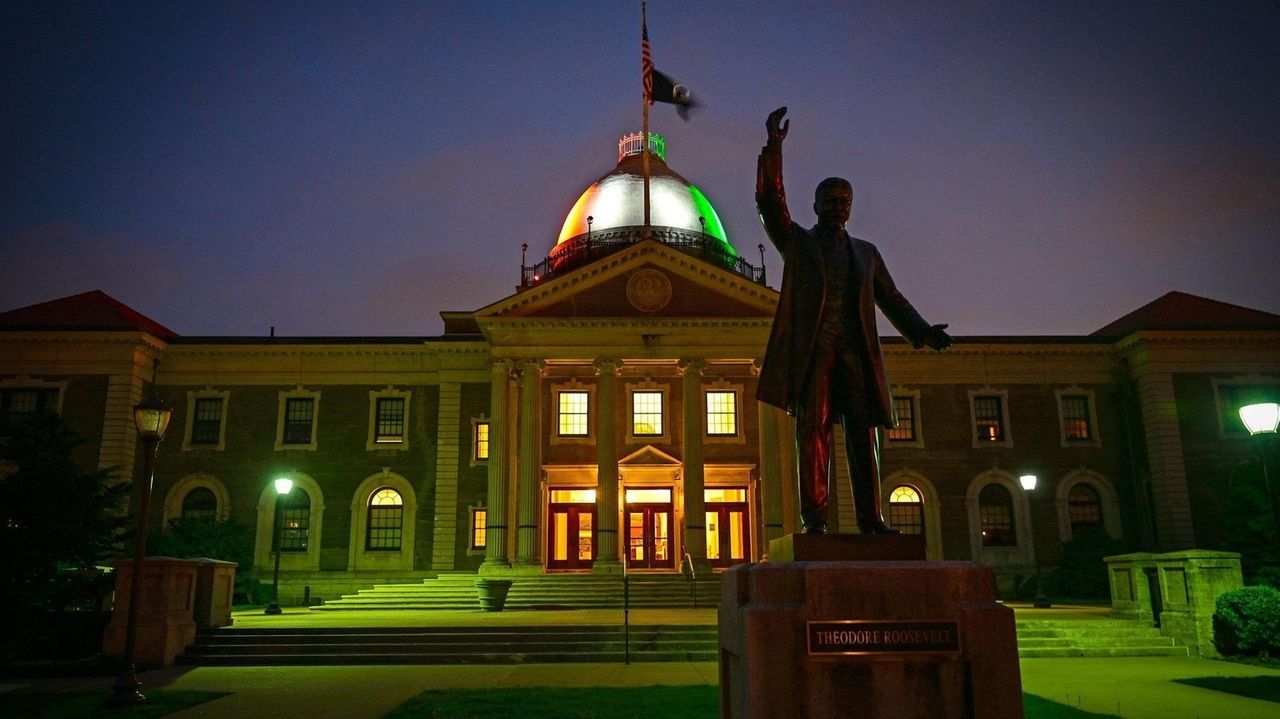 A dome lighting ceremony was held at the Nassau County Legislative and Executive Building in Mineola on Tuesday, to help raise awareness for emergency supplies that are needed in India. Nassau County Executive Laura Curran, urged county residents to donate whatever they can, whether it's money or personal protective equipment. Credit: Thomas A. Ferrrara

Help, in the form of emergency supplies is desperately needed for India — reeling from the ravages of the coronavirus — Nassau County Executive Laura Curran said Tuesday night, urging residents to donate whatever they can.

"Now the numbers are staggering," she said at a news conference in Mineola with State Sen. Kevin Thomas (D-Levittown) and members of the Indian American community. "The statistics that we’re hearing, India crossed the 20 million mark of reported cases. I’m hearing from people that it’s much higher than that, that there are so many more unreported cases. The need is great."

Thomas, the first Indian American to serve in the State Senate, said India was there for the rest of the world in bringing down the COVID-19 rates.

"Now we are here for India," he said. "The country’s health system is in a state of collapse as hospitals and clinics face dire shortages of beds and lifesaving supplies. Medical oxygen is [in] critically short supply in India with an estimated daily need of two million oxygen cylinders, far exceeding the domestic production capacity."

Since February, India has been hit hard by more contagious variants of the virus, coming after the government allowed massive crowds to gather for Hindu religious festivals and political rallies before state elections.

India’s official count of coronavirus cases surpassed 20 million Tuesday, nearly doubling in the past three months, while deaths officially have passed 220,000. Staggering as those numbers are, the true figures are believed to be far higher; the undercount an apparent reflection of the troubles in the health care system. The country has witnessed scenes of people dying outside overwhelmed hospitals and funeral pyres lighting up the night sky.

Health officials on Long Island are offering to help as are several metropolitan-area Indian-American organizations.

Dr. Binu Chacko, president of the greater New York chapter of the Association of Kerala Medical Graduates, or AKMG, which consists of medical and dental specialists from Kerala, an Indian state, said the nonprofit is working to send personal protective equipment to health professionals there in need.

"Some people aren’t even able to get into hospitals and they’re asking if they know of hospital beds available that they can transfer or take their loved ones to," he said earlier Tuesday of text messages he has received. "The other texts are based on how somebody who is already kind of acquired [COVID-19] just passed away too quickly."

What’s going on in India is a "grave situation" as the ratio of doctors to help patients is low to provide care for everyone, said Dr. Abhay Malhotra, president of the American Association of Physicians of Indian Origin of Queens and Long Island.

"A lot of people, they can’t even go and see the doctor," said Malhotra, who is chief of cardiology at St. Charles Hospital in Port Jefferson.

Malhotra said the organization is working to set up among other things, telemedicine sessions, as physicians will volunteer three to four hours to help give advice to people in India.

"Time is of big essence because every minute somebody is dying due to a lack of supply" he said.

Here are some organizations accepting donations for India:

The Association of Kerala Medical Graduates —

Federation of Malayalee Associations In America —

any questions can be emailed to info@aapiqli.org