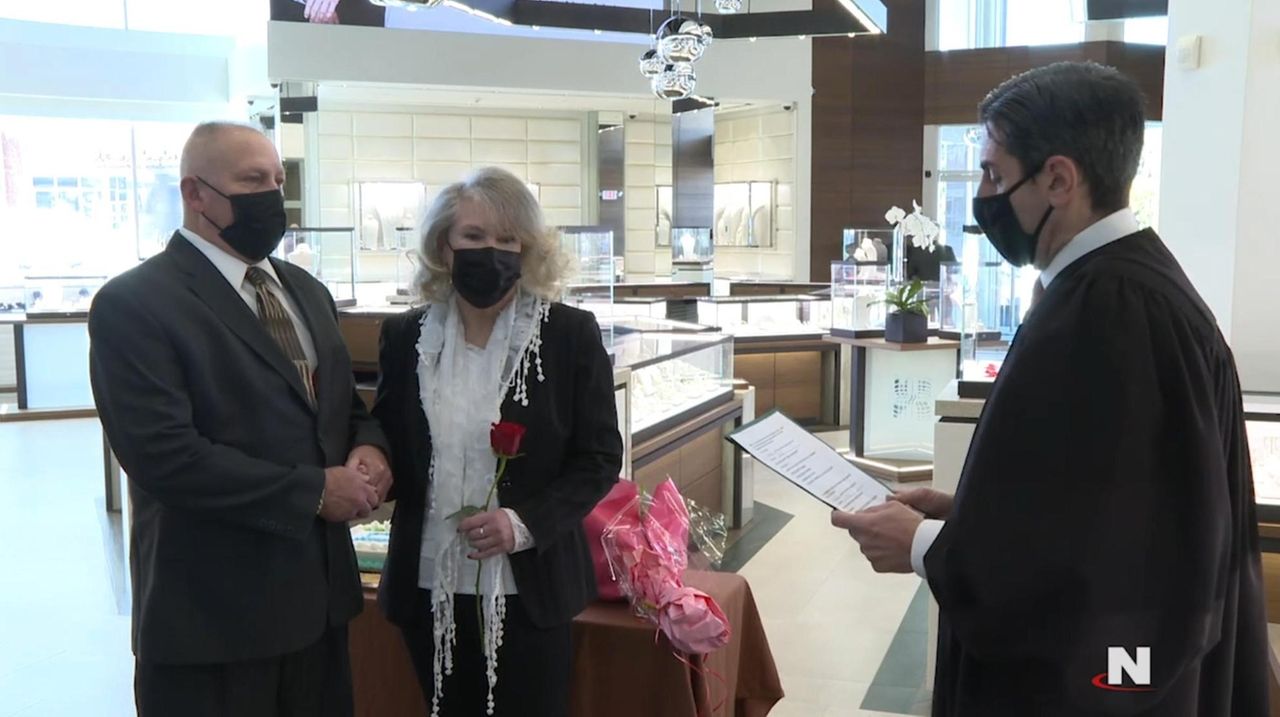 COVID-19 has taken so much from us over the past year.

Thousands of lives lost to the deadly virus. Countless serious illnesses and immeasurable heartache for those working on the front lines.

But two days before Valentine's Day, some Long Island couples who were directly affected by the coronavirus showed that love and romance remain beyond COVID-19's reach by renewing their vows in a pair of intimate and socially distanced ceremonies.

In Greenvale on Friday, Grace and Charlie Limbach of St. James, who battled COVID-19 in December — she still has yet to regain her sense of smell — renewed their vows after 37 years of marriage in a ceremony officiated by North Hempstead Town Clerk Wayne Wink.

"It was pretty brutal," Charlie Limbach said of COVID. "About a month of hell."

Added Grace Limbach: "We were very fortunate to come out pretty much unscathed."

Krypell called it "heartwarming" to recognize a couple that "has survived COVID and such a challenging year and all the trials and tribulations you guys must have been through."

Across Nassau County at the Coral House in Baldwin, four couples who worked on the front lines against the virus reaffirmed their love in a Cupid-inspired chapel adorned with a tiered wedding cake, roses and red balloons, and with a Champagne toast.

"It's been a challenge in many ways," Michelle Foder of Malverne, a funeral director in Franklin Square, said of the past year. "I am very thankful to do something like this. A little happiness in the world."

"A little bit of love in the air," added Lawrence Foder, her husband of 12 years, who works in the Hempstead Town Clerk’s Office.

The ceremonies were officiated by Hempstead Town Clerk Kate Murray and Councilman Anthony D'Esposito, who each stood in plexiglass enclosures. All participants, including the brides, grooms and officiants, wore masks.

"It's an opportunity for us to recognize those on the front lines during the pandemic and give them the opportunity to celebrate Valentine's Day in a socially distanced and safe way," D'Esposito said.

Army Sgt. Matthew Schmidt, a former NYPD and Nassau police officer, and his wife Stephanie, a registered dietitian, were married by Murray in 2007 just before his deployment overseas. She officiated at the Massapequa couple's renewal ceremony as well.

"There's so many front lines workers that are out there who are not here today — police, fire, grocery store, delivery workers," said Matthew Schmidt. "It's amazing what everybody's been doing. It's a great honor but they deserve this also."

Robert and Lisa Dexter of Island Park have been married for nearly 32 years. They said the past year was a challenge.

"Being stuck in the house together for a year and we didn't kill each other," said Robert Dexter, a former chief of the Island Park Fire Department. "And here we are still in love."

The happy couple, however, disagreed on the key to a happy marriage.

But Lisa had other ideas.

"You got to keep it spicy," she said.