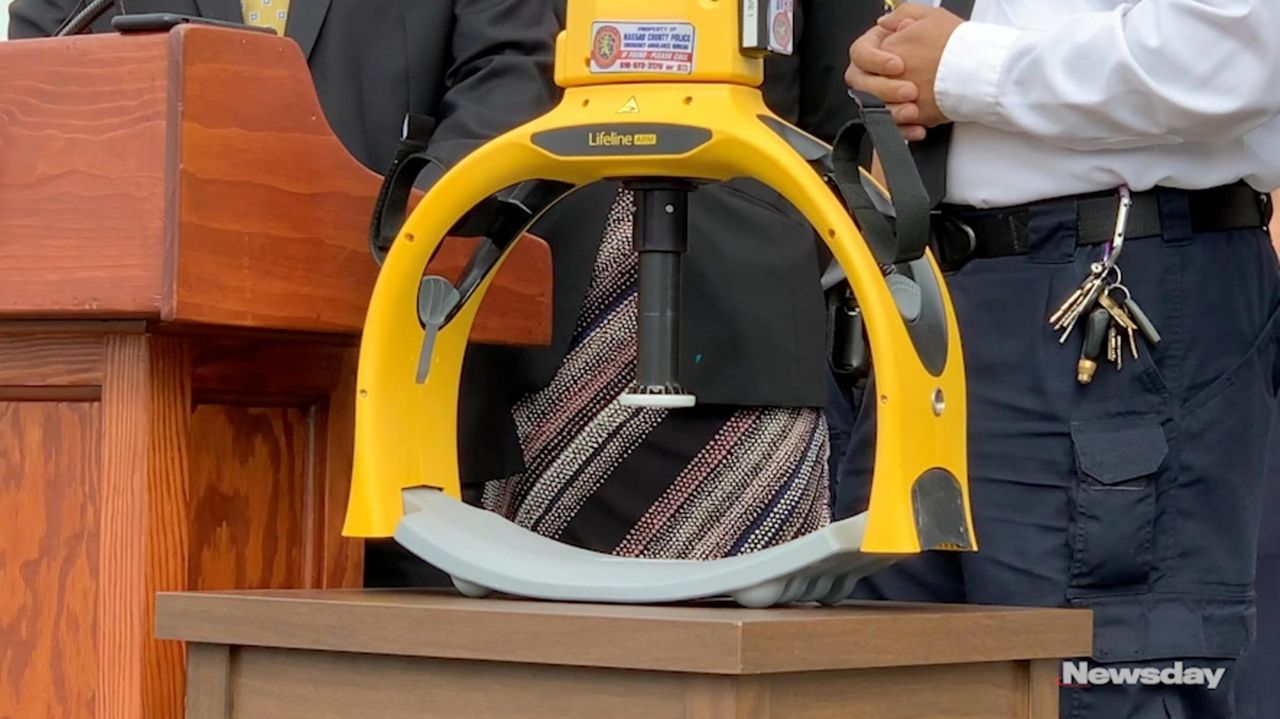 The chance of surviving a heart attack in Nassau County has dramatically increased due to a new technology that will aid EMS medics responding to a cardiac arrest, law enforcement officials said Monday.

The Nassau Police Department spent $300,000 in asset forfeiture funds earlier this summer to purchase 30 automated chest compression devices, officials said. They will be installed in every county ambulance and can perform high quality, uninterrupted mechanical chest compressions on an individual in distress.

The CPR ventilation technique must still be performed manually.

Law enforcement officials said the machine  will assist EMS medics, allowing CPR to be performed when taking a patient down a flight of stairs, into an ambulance and while in a moving vehicle. The device also frees medics to perform other lifesaving tools during an emergency, said Nassau Police Commissioner Patrick Ryder.

"It saves the hands of the tech who has a million other functions that he's doing," Ryder said during a news conference outside police headquarters in Mineola.

During the past month, the machines have been used 22 times in Nassau with the pulse of the patient restored 10 times — a 45 percent success rate, Ryder said. The typical annual success rate for medics in Nassau performing manual CPR is about 30 percent, he said.

“It's plain and simple — this device will help our first responders save lives," said Nassau County Executive Laura Curran, who also attended the news conference.

Christopher Airey, director of Nassau's Emergency Ambulance Bureau, performed a demonstration of the battery-operated device, which fits over the patient's chest while also keeping them firmly in place. The device does not fit exceedingly wide individuals or children whose chest height is too small.

"The machine will do perfect compressions," Airey said. "It doesn't get tired or fatigued. Manual CPR can be very strenuous. It will allow us to provide further life saving intervention while chest compressions are in progress."

The police department first began using the device, made by Defibtech of Guilford, Connecticut, earlier this year when it was on loan to the county, officials said.

Nassau Legis. Siela Bynoe (D-Westbury) said that after witnessing a demonstration she became convinced the county should purchase the technology using asset forfeiture money, including funds seized by drug dealers.

"These machines will aid our first responders in being able to preserve life," said Bynoe.

More than 100 commercial companies, volunteer fire departments and hospitals are authorized to operate ambulances in Suffolk, which does not have a centralized ambulance bureau, Kelly-McGovern said.

It was not immediately clear exactly how many devices were in use in Suffolk or by volunteer fire departments in Nassau.

Fighting COVID-19: How medical experts have faced the virus
How to get a COVID-19 vaccine appointment
1:42 Transition to high school more troublesome because of COVID-19
2:19 A baby journal lost on the LIE to be reunited with family
2:15 Nassau holds 'Community Vaccination Day in Elmont
Nassau Executive Laura Curran in COVID-19 quarantine
Didn’t find what you were looking for?