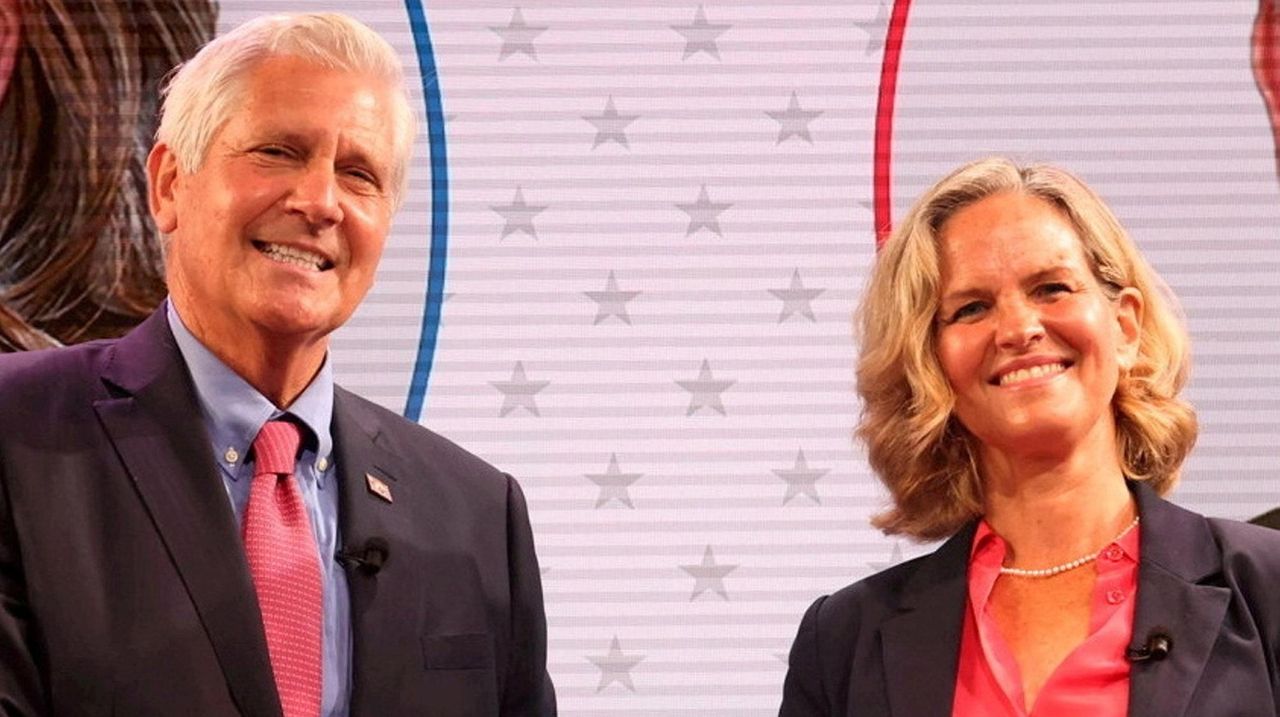 Nassau residents will head to the polls on Tuesday to elect a county executive. This year's race is between incumbent Laura Curran and Hempstead town councilman Bruce Blakeman. Newsday's Faith Jessie has more. Credit: Newsday

In 2021, Curran, a Democrat, is campaigning on her record of helping residents navigate the coronavirus pandemic, Nassau's high vaccination rate, what she touts as Nassau's reputation as a safe community and two years of budget surpluses.

Blakeman's message: Reassessment caused taxes to spike for many county homeowners and was marred by bureaucratic errors.

Voters' guide: See the candidates who will be on your ballot

In an interview with Newsday at her home in Baldwin last week, with her mother and campaign officials sitting nearby, Curran made the case for a second term.

In a Zoom interview from his campaign office, Blakeman, 66, of Atlantic Beach, said he decided to run because of urgent county issues, including reassessment, he felt needed to be addressed.

"It’s about the fact that here I am sitting on the sideline, watching things going on, that I disagreed with," Blakeman said.

"I had the choice to have a very comfortable summer, not work 15 hours a day, not subject myself to constant scrutiny, or to jump in the arena of battle, and talk about the things that I believe in," he said.

The 2021 county executive's race between Curran and Blakeman comes as Nassau County emerges from the coronavirus pandemic with finances that, at least for now, are on the upswing.

That's due largely to the move by the Nassau Interim Finance Authority, the county's financial control board, to refinance more than $1.1 billion in county debt this year.

Craig Burnett, a Hofstra University professor of political science, sketched the challenges this year for both Curran and Blakeman.

"For Curran, I think the challenge is going to be highlighting the fact that a transition has been positive and consistent, that we’ve gotten rid of the corruption, and things are fair," Burnett said.

For Blakeman, Burnett said, "I think the answer is to say [Curran's policies] are bad policies. They've taken more money out of your pocket with the tax reform for property taxes, and on top of that you can expect more bad policies."

Blakeman has the lengthier political resume.

In 1996, he became the first presiding officer of the new Nassau County Legislature, during a period when Republican Thomas Gulotta was county executive.

Blakeman served two terms in the legislature before losing to Democrat Jeffrey Toback in 1999.

Blakeman was appointed to the Hempstead Town Board in 2015, a part-time position, and afterward was elected to two four-year terms. He served as Deputy Supervisor to Democratic Supervisor Laura Gillen, after breaking ranks with his party to endorse the Democrat.

An attorney, Blakeman has worked as a consultant to businesses, including a medical marijuana firm in which he disclosed owning a stake in 2017.

Curran worked as a reporter for The New York Post and the Daily News, covering issues including politics and education.

She was elected to the Baldwin school board in 2011, and won election to represent the 5th District in the Nassau County Legislature in 2013.

Curran served two terms in the legislature before her election as county executive.

During her stint in the legislature, she rankled members of her own party when she supported Republicans who needed her vote to borrow for infrastructure projects, including $445,000 for streetscaping in Baldwin.

Democrats were withholding their votes for bonding to try to force Republicans to agree to hire an independent inspector general to investigate corruption and misconduct.

Curran's countywide reassessment, which took effect in the 2020-21 tax year, has become the most prominent issue in the county executive campaign.

When Curran took office in 2018, the tax rolls had been frozen since 2011 — the year Mangano instituted the freeze as he reviewed methods for valuing residential and commercial properties in Nassau.

By the final year of the freeze, 2019-2020, the county had settled about 80% of all tax challenges filed during an eight-year period.

During the freeze, tens of thousands of homes had become undervalued.

The mass settlement policy also caused a sizable shift in the tax burden onto property owners who did not win reductions or did not file appeals.

At the start of Curran's term, Republicans and Democrats largely were in agreement on the need for a reassessment.

But by September 2018, Republicans were attacking Curran's rollout of the reassessment.

Republicans said there were errors in the process, including publication of incorrect values on tentative rolls. The county later corrected the values.

Curran defends the reassessment, saying it's provided a broad correction in assessments that will restore fairness to the county's tax roll.

Curran also cites assessment experts on the state and national level who said her administration handled the reassessment fairly, and that the assessments were highly accurate.

"All agreed: We got as close to accurate as you can get," Curran said.

Blakeman offered no specific plans for overhauling the county Assessment Department, or for correcting what he describes as an inaccurate property tax roll.

Blakeman also declined to say whether he would implement a new reassessment, saying he would need to study the issue.

"It’s like an automobile that is not operating — you have to get under the hood," he said.

"I would have had a real reassessment — inspect each home, and make your evaluations based on actual inspections, photographing each home and doing a detailed analysis based on what the valuations are in the community," Blakeman said.

"We’re looking at every home," Curran said in response. "We’re exploring all kinds of options."

Blakeman and Curran also have tangled over county finances.

Nassau for years struggled with operating deficits, to the point where the State Legislature created the Nassau Interim Finance Authority in 2000 with the power to reject county budgets.

At a Newsday Live Town Hall earlier this month, Curran took credit for turning the county's finances around.

Curran cites county financial reports showing surpluses in 2019 and 2020, and a likely surplus in 2021.

Blakeman said Curran had "underestimated revenues such as sales tax revenue in order to give a property tax increase this year. It’s a shell game, and a political ploy."

Curran's campaign has focused on Blakeman’s record as presiding officer of the Nassau County Legislature in the 1990s.

"The fact is, when he was voted out of the Legislature, Nassau was named the most fiscally irresponsible County in America," Curran said, citing an Oct. 6, 1999, New York Times story referring to Nassau's "fiscal mess."

The GOP-controlled legislature's decision during that period to raise taxes by 9.4% "still didn't fix the problem," Curran said.

"It's that kind of fiscal irresponsibility that has gotten us into such a mess for so long, and we cannot afford to go back to that kind of management," she told Newsday.

"I think she’s running against Tom Gulotta, not Bruce Blakeman," he said. "The Legislature had the courage to stand up and say we have to cut spending to have structural balance in our budget."

During the campaign, Blakeman has tried to tie Curran with Democrats in the State Legislature who voted for the law, even though county executives weren't involved in the process.

The legislation, which took effect in January 2020, eliminated cash bail on most misdemeanors and nonviolent felonies.

And in a video on Facebook, Blakeman talks about an increase in gunshots in Nassau.

It's a reference to state Sen. Todd Kaminsky (D-Long Beach), who is running against Republican Anne Donnelly for Nassau County district attorney.

Kaminsky voted for the original bail reform legislation, which was part of the state budget.

Kaminsky later helped develop legislation that restored judges' powers to decide whether defendants should be held in custody because they pose a risk to public safety.

At the Newsday Live Town Hall, Curran said major crime was down by 5% in Nassau, and noted the reopening of two police precincts that were closed by former Republican County Executive Edward Mangano.

Curran noted she had no involvement in the bail reform effort in Albany.

But, "I was very, very clear that I thought bail reform went too far, too fast," she said at the town hall. "I put together a common-sense coalition of law enforcement personnel to come up with solutions to this debacle."

Education/career: Former reporter for the New York Post and the Daily News. Served on the Baldwin School Board and was elected to two terms on the Nassau County Legislature. Received her bachelor's degree in humanities from Sarah Lawrence College and did graduate work in American Studies at the CUNY Graduate School.

Education/Career: Graduate of Arizona State University and California Western School of Law. Blakeman is an attorney and consults for private businesses. He is a member of the Hempstead Town Board.