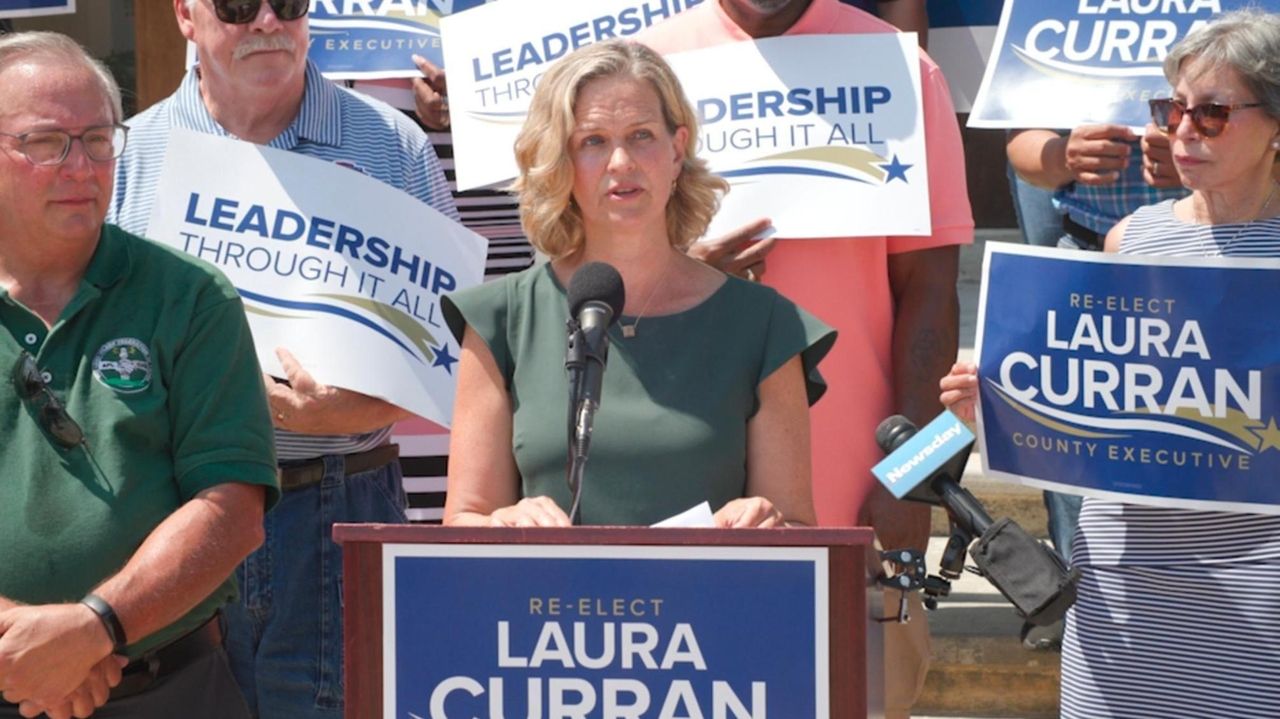 Nassau County Executive Laura Curran on Saturday outlined what she hopes to accomplish in her second term, while touting the county’s low crime rate, its COVID-19 response and what she called her fiscal responsibility.

"My approach to leading over the past four years has been steady and reasoned, not political," Democrat Curran said during a campaign rally in front of the Theodore Roosevelt Executive and Legislative Building in Mineola. "That’s how we made it through the challenges of the past four years and how I’ll lead the county through what’s next."

Curran is running for her second, four-year term against Republican Hempstead Town Councilman Bruce Blakeman, who said in a statement Saturday that Curran discussed her plans for the future because "she is desperate to distract Nassau families from the damage that her budget tax hikes, as well as her reassessment tax hikes, have already caused."

Blakeman said he would "deliver real, recurring tax relief to neighbors across Nassau" by using the county’s budget surplus to implement a tax cut of more than $120 million.

Curran talked up those budget surpluses and her "consecutive no-property-tax increase budgets," along with "Nassau’s first positive bond rating in 15 years. Through dogged fiscal discipline, I took on Nassau’s chronic deficits and long legacy of corruption."

Curran said her plan for $375 cash payments to households earning up to $168,900, and to others who prove a hardship earning up to $500,000, would help aid the county’s economic recovery. The money would come from $100 million in federal pandemic funds.

John Durso, president of the Long Island Federation of Labor, said Curran "inherited a mess," a reference to former Republican Nassau Executive Ed Mangano, who was convicted in 2019 on corruption charges.

"And she went at it calmly, professionally," he said to the crowd of roughly 150 people, some wearing union T-shirts and hoisting signs that said "Fighting for Working People." "She didn’t get rattled. She’s got a spine of steel."

Durso said the federation gave Curran one of its few unanimous endorsements and said unions would work with her in a second term to create jobs and expand the economy.

Naala Royale-Holder, a friend and neighbor of Curran in Baldwin and owner of Dunns River Lounge, a Jamaican restaurant in Rockville Centre, called Curran an ally of small-business owners. She said county COVID-19 grants allowed restaurants like hers to pay employees and fund other expenses after they shifted to takeout-only.

Curran vowed to "never defund the police," something she has said repeatedly in recent weeks amid calls by some progressive Democrats to reduce police funding, and she promised to "continue to make strategic investments in intelligence-led, community-based policing" and to expand efforts to increase the police department's diversity. She pointed to how in October U.S. News and World Report named Nassau the nation’s safest county.

Curran said the county in her second term would continue an aggressive road-paving effort, expand mental-health services and invest more in transit-oriented development and "walkable downtowns."