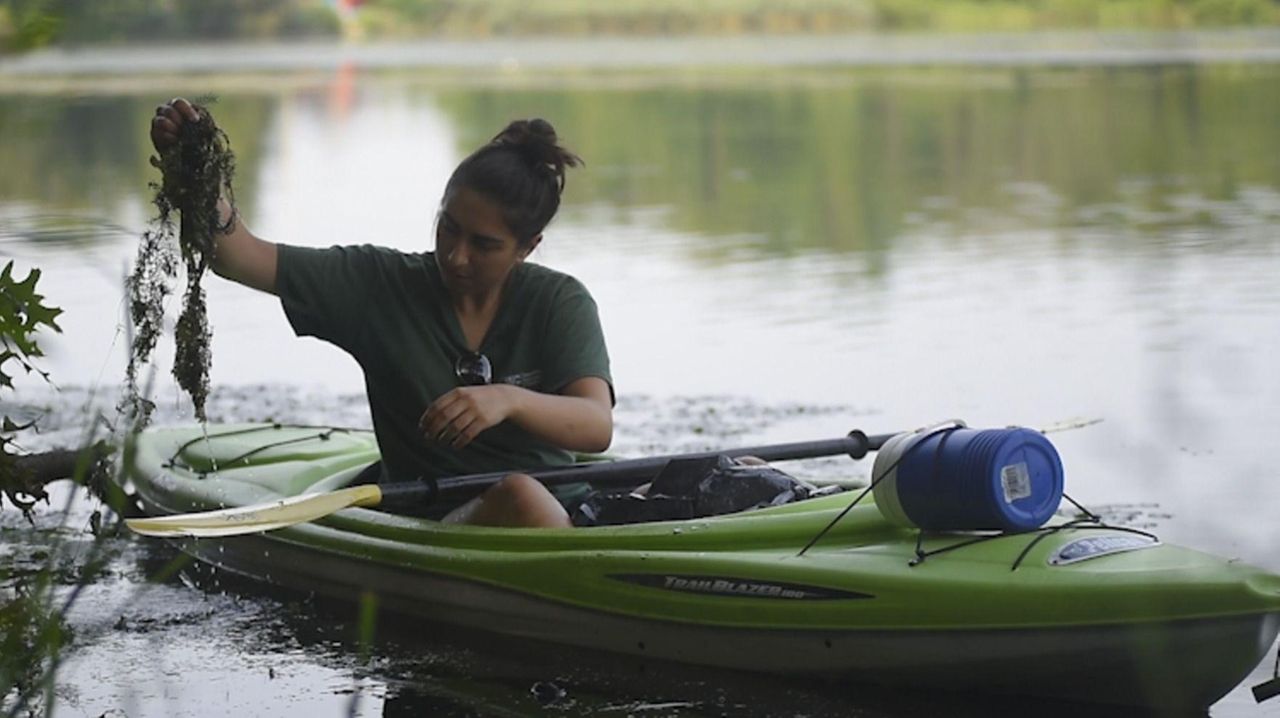 New York State Department of Environmental Conservation staff and volunteers on Thursday, July 13, 2017, pulled water chestnut from the Massapequa Lake and nearby Massapequa Reservoir as part of Invasive Species Awareness Week, a statewide educational campaign to raise awareness about the harmful effects of such incursions. Credit: Johnny Milano

When Janet Nix and her family first moved to a home on Massapequa Lake in 1968, the water off their backyard was clear and open aside from a few patches of lily pads. But in the past few years, water chestnut plants have taken it over, the Massapequa resident said.

On Thursday, Nix joined in with staff from the state Department of Environmental Conservation and volunteers who were pulling water chestnut from the lake and nearby Massapequa Reservoir as part of Invasive Species Awareness Week, a statewide educational campaign to raise awareness about the harmful effects of such incursions.

Water chestnut, which is native to Europe, Asia and Africa, was found in Massapequa Lake in 2011, said Heidi O’Riordan, an aquatic biologist who manages freshwater bodies in Nassau and Suffolk counties for the DEC.

Now, the 40-acre lake north of Merrick Road is “covered completely” and the plant has spread to the reservoir, which encompasses 20 acres, she said. The invasive species doesn’t have any natural predators in the area, allowing it to outcompete other plants.

“Once the weed takes over, it really gets overwhelming,” she said.

Water chestnut probably was introduced to the lake by residents who dumped contents of aquariums or decorative backyard ponds, O’Riordan said. When the plants break down, they reduce the amount of oxygen in the water, creating added stress for fish.

The nut at the base of the plant has barbs that can attach to fishing gear, boats, dogs and birds to spread the plant through bodies of water. It also can cause injury to barefoot waders and or those who are fishing.

About 15 DEC staffers, interns and volunteers worked on the shore and from kayaks and canoes, pulling the leaves that float on the surface to remove the vine and roots below.

The DEC strives to remove the plant before it drops its seeds in late July or August, O’Riordan said, but some pulled up Thursday already had lost their seeds. The agency removed about 6 cubic yards of water chestnut from the reservoir in late June and will continue to monitor the water bodies throughout the summer, she said.

In another effort, Nassau County brings in a mechanical harvester each year to remove water chestnut from the deeper parts of Massapequa Lake, said Brian Schneider, an assistant to the county’s deputy commissioner of public works.

The county has seen “a tremendous reduction” in the amount of the plant, Schneider said, but progress comes at a high cost — more than $100,000 each season.

Nix, 62, who said she regularly pulls water chestnut from the lake, hosted the DEC staffers and volunteers with bagels, coffee and a barbecue Thursday as they worked out of her backyard. She fears the weed’s growth will turn the lake into a swamp and is concerned about its effects on wildlife.

“It’s unusual to have this kind of oasis in the midst of all this commercialism,” she said. “So to lose these places like this because it wasn’t maintained would be very sad.”