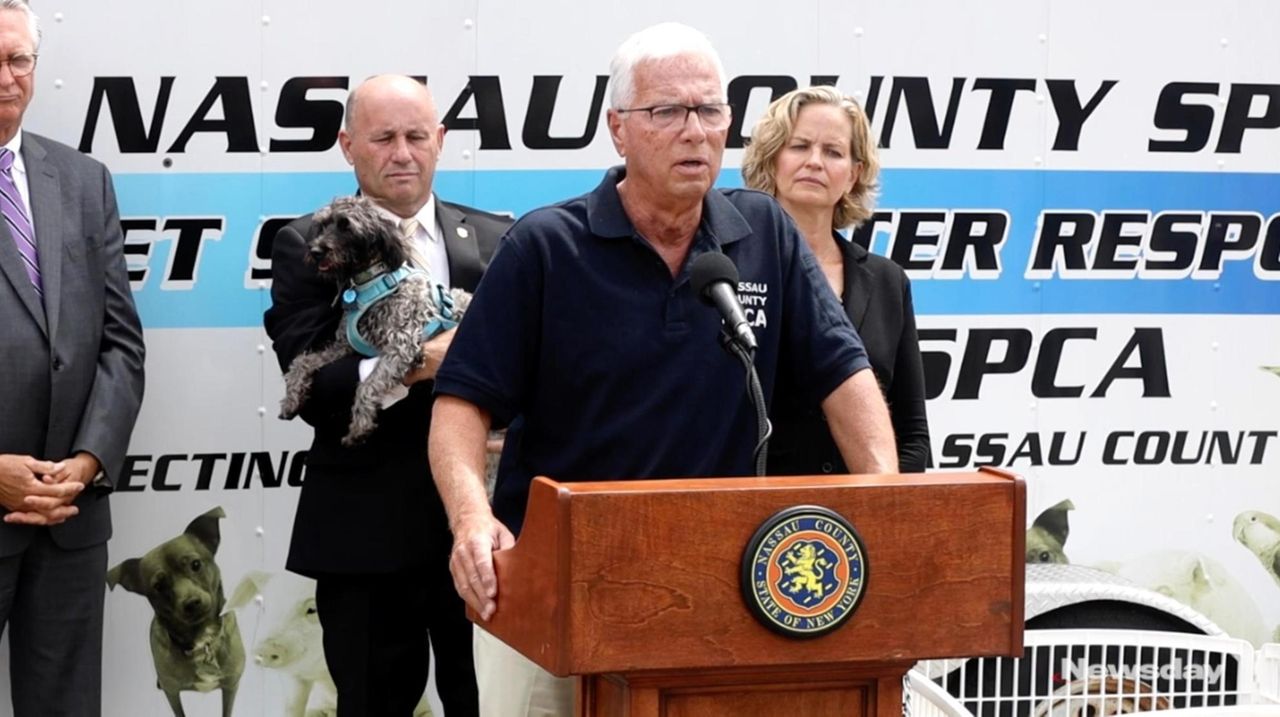 Prosecutors filed charges last month against the Puppy 4 You LLC corporation, which ran an unmarked pet storefront on Merrick Avenue in Baldwin. The store’s owner is Pecardy Delone, 36, of Baldwin..

Delone’s Mineola-based attorney Bob Schalk said the 11 dogs recovered were not Delone’s property, but said he was renting the space to independent contractors who owned and sold the dogs.

Nassau County Police Commissioner Patrick Ryder said police responded to a 911 call of dogs barking at the storefront March 16. A landlord opened the business where police found 11 sick puppies, ranging in age from 6 weeks to 3 months old. Many of the puppies were malnourished and 10 of the dogs had parasites. One puppy later died.

The dogs required $54,000 in veterinary treatment, including vaccinations and deworming procedures. The Nassau SPCA is accepting donations to cover the expenses on its website. One person said they paid $9,000 in veterinary bills after buying a puppy, officials said.

Four of the puppies have been designated for adoption while six puppies are not yet eligible and still receiving medical care, officials said.

"Can you imagine the outcry if this were children, if these were babies in here? That’s basically what they were," SPCA President Gary Rogers said. "They can’t speak for themselves. They were locked in a storefront where there wasn’t any light."

Several of the dogs were imported from Poland and sold for up to $5,000 each, Rogers said.

Officials are investigating where the rest of the dogs originated from and said authorities will investigate other illegal puppy dealers. .

"Dogs are in hot demand right now and there is a lot of money to be made," Curran said. "So folks selling dogs don’t care about the rules and the animals. We want to hold this up as an example of what can happen if you’re cruel and mistreat animals and try to make a buck off of one of these lives."

The SPCA also offers $1,000 reward for reports of animal abuse.

Curran said many dogs adopted or purchased during the pandemic are being returned to shelters. Officials urged prospective pet owners to adopt from shelters rather than pet stores.

The state Senate passed a bill last year they would ban puppy mills and sales of dogs and animals in pet stores, but the bill stalled in the Assembly.

"The conditions these animals had to endure in this store are revolting," said one of the bill’s co-sponsors Sen. Todd Kaminsky (D-Long Beach). ""This recent bust solidifies why families should utilize shelters when seeking to add a dog or other pet to their family," he said.

Doctors see a summer surge in children's cold, virus symptoms
Man sentenced to 37 years to life in prison in fatal Hempstead shooting
Army veteran who always put family before himself dies at 92
1:49
Where's my mail? LI postal service slower than before pandemic
2:23
As COVID-19 cases rise, officials keep the focus on vaccinations
Roslyn Heights' allure: schools, shopping, commute
Didn’t find what you were looking for?