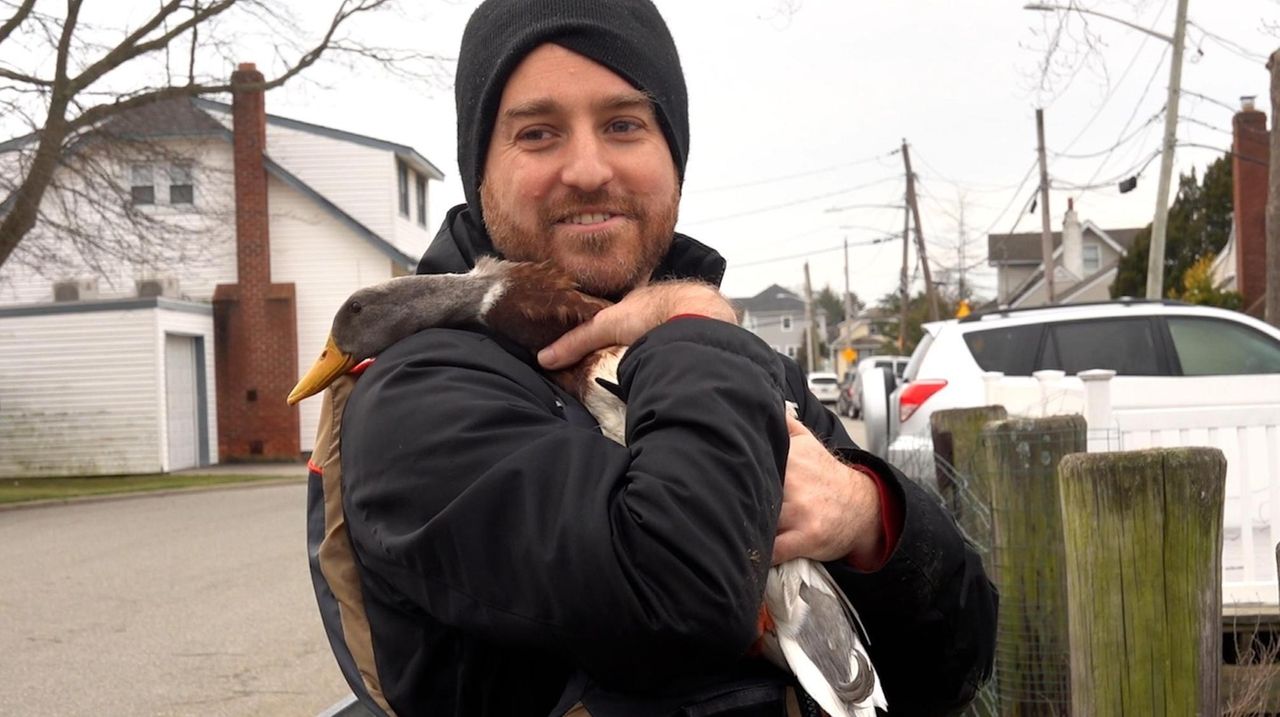 Animal activists on Wednesday took to the Baldwin Harbor waters in kayaks to rescue domesticated ducks that had been abandoned. Some spoke with Newsday's Steve Langford and said they've noticed a trend of ducks being adopted as pets during the pandemic, but sometimes discarded into the wild. Credit: Newsday / Chris Ware; Debbie Egan-Chin

The emaciated domestic Saxony duck, illegally discarded in a Baldwin Harbor canal, rested its head trustingly on its rescuer’s shoulder.

"This guy is so calm right now, when we went out there ... he thought we were going to eat him," said John Di Leonardo, a wildlife rehabilitator and president of Long Island Orchestrating for Nature. "Once we get him to a nice, loving place, with food, he's going to have a whole new life."

The lucky winged creature with a striking emerald neck, which can resemble a wild duck, is one of about 60 to 70 domestic ducks rescued from the canal over the past year.

With Easter soon approaching, rescuers fear families or teachers who use the ducks for educational projects will release them in the wild. That means certain death, rescuers say, because these domestic ducks are unable to forage, fly or escape predators.

"We are urging people not to impulse-buy these animals; these are thinking, feeling animals, they are not science projects, they are not Easter photo props, and they are not trash to be discarded when you don’t want them anymore," Di Leonardo said.

He set out with four other volunteers in kayaks on Wednesday morning to rescue more of the Baldwin ducks. Also caught that morning were a white, orange-billed Peking duck and a black Cayuga.

After vet visits, they will go to foster homes.

It is a misdemeanor, punishable by a maximum fine of $1,000 and a year in prison, to abandon a pet. This is far from a new problem on Long Island, once home to major duck farms.

"Over the years, it's just continued ... and I've tried to feed them and tried to rescue them," said Alberta Bonner, who lives by Baldwin's Milburn Pond and whose yard is often visited by ducks. "I wish the schools would stop it too; I wish you could just show a video of the egg hatching out instead of getting fertilized egg hatching them out and dumping them."

The pandemic apparently spurred a spike in home-hatching, Di Leonardo said. The towns of Oyster Bay, Hempstead, Babylon, and Riverhead all are hot spots for discarding ducklings, said Di Leonardo, who has rescued hundreds in the past few years.

Yet the domestic ducklings sold – state law requires these highly social animals to be bought in groups of six -- have bodies too big and wings too small to fly any distance. So they are easy meals for snapping turtles, foxes and the like.

Many of them are ill from poor diet and care. "We’ve rescued ducks out of this canal with bacterial infections, with a deformity called Angel Wing ... niacin deficiency, wry neck, when the neck is twisted around, leg issues and one with a shattered wing," Di Leonardo said.

"I understand how tempting it is to have them, but a non-live alternative would be much better for Easter," said Dr. Sara E. Childs-Sanford, Cornell University College of Veterinary Medicine. "The right thing to do if they are interested in keeping it, they need to consult with someone who knows how to properly take care of it."

Ducks can live about a dozen years, and they can be messy, and must swim.

"Whether it’s a duckling, a baby rabbit, a puppy, a cat, a kitten, an adult dog – any kind of animal – you have to realize you're making a commitment to that animal," said Gary Rogers, Nassau County SPCA Board president.

Said Roy Gross, Suffolk County SPCA chief, "The best thing to do is not get them in the first place, it's unfair to the animals -- and it certainly becomes a criminal issue if they are abandoned."

Di Leonardo's group, which helps duckling-owners with advice, can be reached on Facebook or at 516-592-3722.