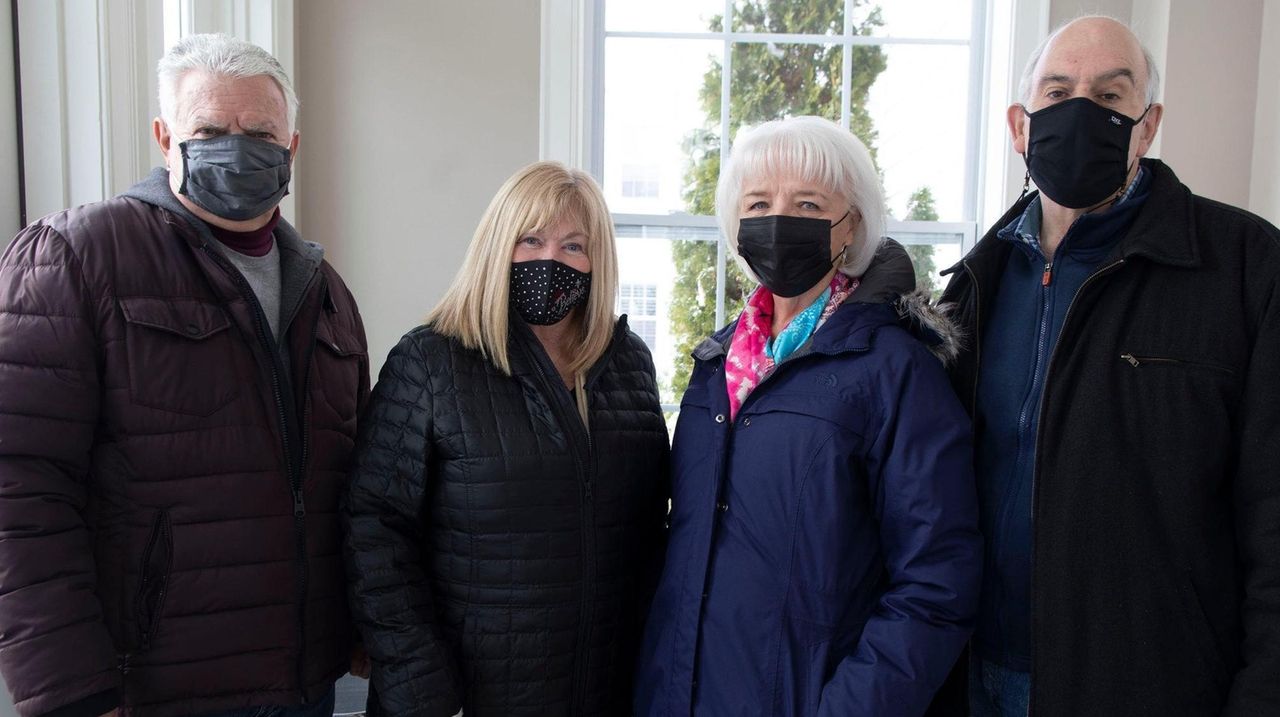 Seniors at The Seasons living facility in Seaford are hopeful their property assessments will be corrected after seeing significant increases in their tax bills. Credit: Newsday / Chris Ware

Nassau County is correcting errors with hundreds of property assessments after failing to apply a key exemption to phase in tax hikes on the homes and will pay more than $2.7 million in refunds for the overcharges, officials estimate.

The biggest refunds are due on behalf of two senior developments, Seasons at Seaford, where $192,000 is owed, and Mill Pond Acres in Port Washington, where more than $1.6 million is due to be refunded, according to county officials and legislative documents.

In addition, the Assessment Department says it also owes the rest, about $900,000, to owners of another 180 properties for which a "phase-in" exemption should have been applied, but wasn't, because of a technical glitch.

Application of a "phase-in" exemption is a key element of Nassau County Executive Laura Curran's reassessment, the first in nearly a decade. With the prospect of large tax increases looming for many, the phase-in was implemented to slow sudden swings in tax bills, and spread increases and decreases over a five-year period. Curran refers to the measure as the "Taxpayer Protection Plan," which was enacted by the state and county legislatures.

Officials said the mistakes stemmed from two issues: "Seasons" properties in Seaford were incorrectly classified as "new construction," despite some residents having lived there for several years. There are 112 properties listed in legislative documents, and with those properties, the phase-in was either not applied or not fully applied, officials said. Issues arose because in that development, some properties were built after others, complicating the assessment process.

In Port Washington, changes in the "section, block and lot" numbers in the development caused a separate technical glitch. The result was that the tax history of the Port Washington properties, for the purposes of applying the exemption, was removed. As such, the property was taxed as other newly constructed properties would be: Without any phase-in.

The same issue occurred for about 180 properties countywide, where the section, block, and lot numbers were changed, said Deputy Assessor Robert Miles. Those homes were also treated as "new construction," and a phase-in was not applied.

A phase-in exemption cannot be applied to newly constructed properties, because without a prior tax history, there's no difference to make up.

Residents of The Seasons saw their tax bills rise by several thousands of dollars. Residents said they had a tough time getting assessment officials to return their calls, or a live person to answer the phone.

"We have some people who are on a very strict, fixed income, and we were finding out many of our neighbors are going to be distressed over this and they might have to move," she said. "What are they going to be, $24,000 by the time [the phase-in] is ending …? We are seniors. We're all on fixed income, so we don't know what our longevity is. What we’re living on is for the rest of our lives."

She said the issue sent "real shockwaves … through our community."

Miles said the issues were due to a "clerical error," which "doesn't have anything to do with the accuracy of the market values" assigned by the assessment department.

"It wasn't that the market values weren't on the tax lots, that they weren't accurate, it's that a computer wiped out the prior history of the lot, so it had nothing to do with the market value at all or the accuracy of the market value," Miles said.

"This happens all the time. This is what happens when you have 420,000 parcels in your jurisdiction and you had a limited staff trying to get it together," he said in an interview. He noted the department was working to build out the staff.

He said it's common for the county to issue technical corrections, and it has done so annually for years. "The state, with all of its legislators, agreed that this is a process that has to be in place. Assessment is a lot more complex than I think everyone realizes," he said.

The Assessment Department estimated the county would pay total of $2,772,146.39 for the "correction of error" resolutions passed on Monday, according to legislative documents.

Nassau Legis. Steve Rhoads (R-Bellmore) said he did not understand why the county missed that the Seasons was not new construction, noting, "Nobody from the department of assessment figured out this wasn't new construction. It took me 30 seconds."

"We’re talking about a simple check of building records to verify when construction was completed on a particular property," he said, noting "families had to lay out between $3,000-$6,000 out of their pocket wherever it came from, to meet this obligation, and we were wrong."

He added, "I don't know why it takes the taxpayers screaming about their taxes for the Department of Assessment to turn around and take a look to realize they made a mistake."

Hempstead Receiver of Taxes Jeanine Driscoll, a Republican, was among a coalition of elected officials calling on the assessment department to review the case. "I was very upset when I went out there and I realized the severity of the issue. I knew they had been given big increases, but I didn't know how much," she said.

She said, "These are people who are 70 years old, and they're done working, and that's it."

County officials said they did not know when the residents would receive refunds.

Curran, a Democrat, campaigned against what she has described as a "broken assessment system" during the administration of former County Executive Edward Mangano, a Republican.

During Mangano's administration the tax roll was frozen in an effort to stop costly legal challenges to the values. The freeze, and policy of granting automatic reductions to huge numbers of filers, created an imbalance in the tax burden. The effect was that many residents who did not grieve their taxes were shouldering an unfair proportion of the property tax burden as compared to those who grieved and won reductions.

Seasons residents said many of them came to the neighborhood wanting to live closer to their children. Residents noted that they cannot have school-aged children living in the complex. They fund the schools, but don't burden the system.

John Lamonte, 75, a Seaford Seasons resident and retired middle school principal from Queens, saw his taxes rise to $13,620, from $10,036 the year before, according to online county records.

Lamonte said the residents add value to the community and their concerns should be taken seriously. "This was an abandoned school," he said. "Seaford and Nassau County were getting nothing from it. Now you have approximately 180 people here who not only pay taxes, but what they contribute to the local stores." He said the residents have "made it a big positive for them."

As for the reductions they are owed, Lamonte said he is hesitating to celebrate: "They can say what they want to say, but the proof is in the pudding," he said. "We will not believe it until it actually happens."

4:01 COVID-19: From 799 deaths in one day to path back to normalcy
3:04 Nassau DA: Doctor charged with murder in death of 5 patients
State sees decreasing virus positivity, but LI yields higher rate
What you need to know about COVID-19 vaccine development
Way to Go! Mineola senior launches college help website
Cuomo: NY pushing toward reopening, agreeing to limit COVID-19 powers
Didn’t find what you were looking for?