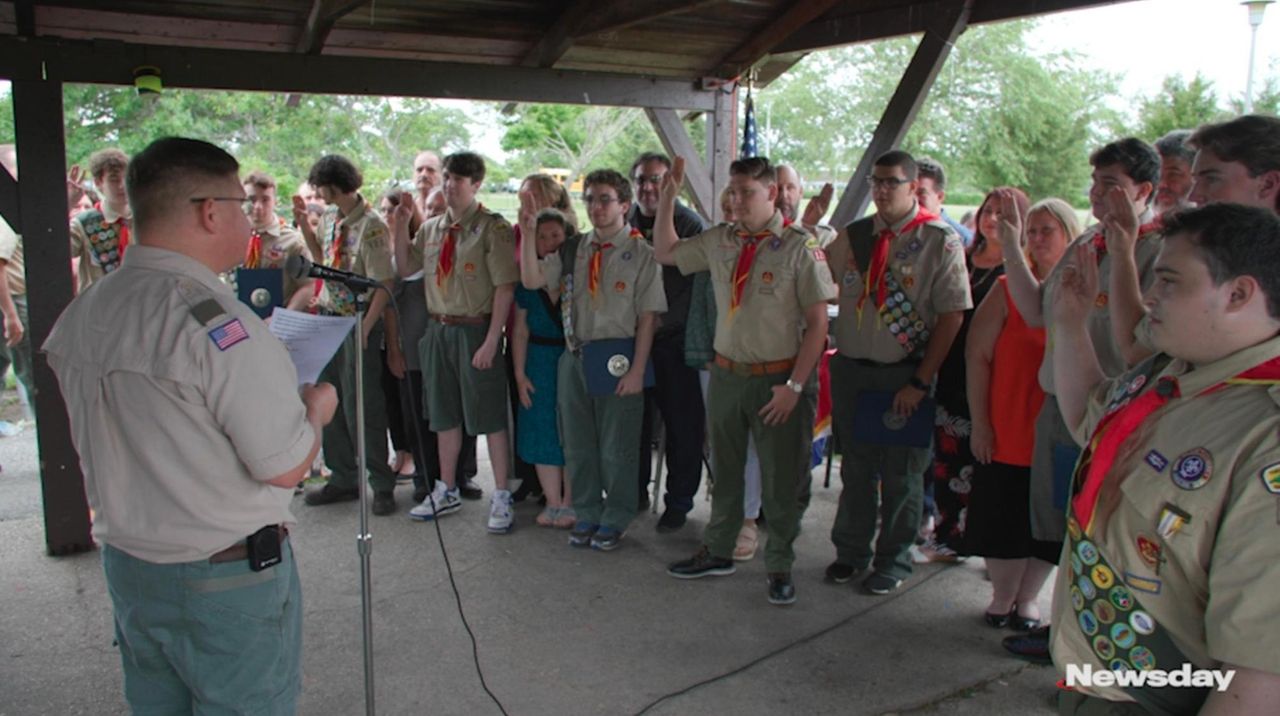 Boy Scouts typically ascend to the prestigious Eagle Scout level in ceremonies of one or two boys, a Long Island Scout official said. But on Saturday, 11 boys and young men did so in a ceremony at Wantagh Park, a sign of COVID-19’s impact on Scouting.

"It’s a five- to seven-year journey, and to have this many and this close together is highly unusual," said Neal Carlino, committee chairman for Boy Scout Troop 123 in North Merrick, the group to which the 11 belong, as well as a 12th new Eagle who couldn't make it to Saturday’s ceremony because of illness. "It says something about the troop and it says something about crazy circumstances we’ve been in the last year and a half."

Only 8% of Boy Scouts earn the rank of Eagle Scout, according to the Boy Scouts of America website. They have to earn 21 merit badges for accomplishments such as first aid, citizenship, cooking, personal fitness, lifesaving, swimming and camping. They also have to put together a service project and serve six months in a position of responsibility.

Newly minted Eagle Scout Tristan Hladky of North Merrick, whose Eagle Scout project included upgrading Wantagh's Last Hope Animal Rescue and Rehabilitation's entrance by refurbishing the sign, painting and adding ornamental plants, is a believer: I think I've learned more in Scouting than in school about the real world, how it works, what you do in it — it's just an amazing program," he said.

Carlino, 58, of Bellmore, said earning some of the merit badges was difficult because some activities were limited by COVID-19 restrictions. Boys typically get four or five of them at the Onteora Scout Reservation, a Boy Scouts camp in the Catskills that has a large lake, archery course, rifle range and other sites where merit badges can be earned with activities.

The Boy Scouts allowed Eagle Scout candidates to perform some activities — like first aid — over the internet, Carlino said.

Those receiving Eagle Scout honors Saturday were ages 16 to 19 — including the troop committee chairman's 19-year-old son, Nick Carlino. The honorees live in North Merrick, South Merrick, East Meadow and Bellmore, and all had met Eagle Scout requirements before they turned 18, Neal Carlino said.

Some completed requirements before the pandemic hit and would have had their ceremonies in the spring of 2020, he said. Others completed their requirements recently, as pandemic restrictions loosened, he said. Carlino said one or two boys is the norm for ceremonies, with a very small number including three Scouts. As for the number at Saturday's ceremony: "I never saw 12 in one group," he said. "That’s unheard-of. But it’s the circumstances."