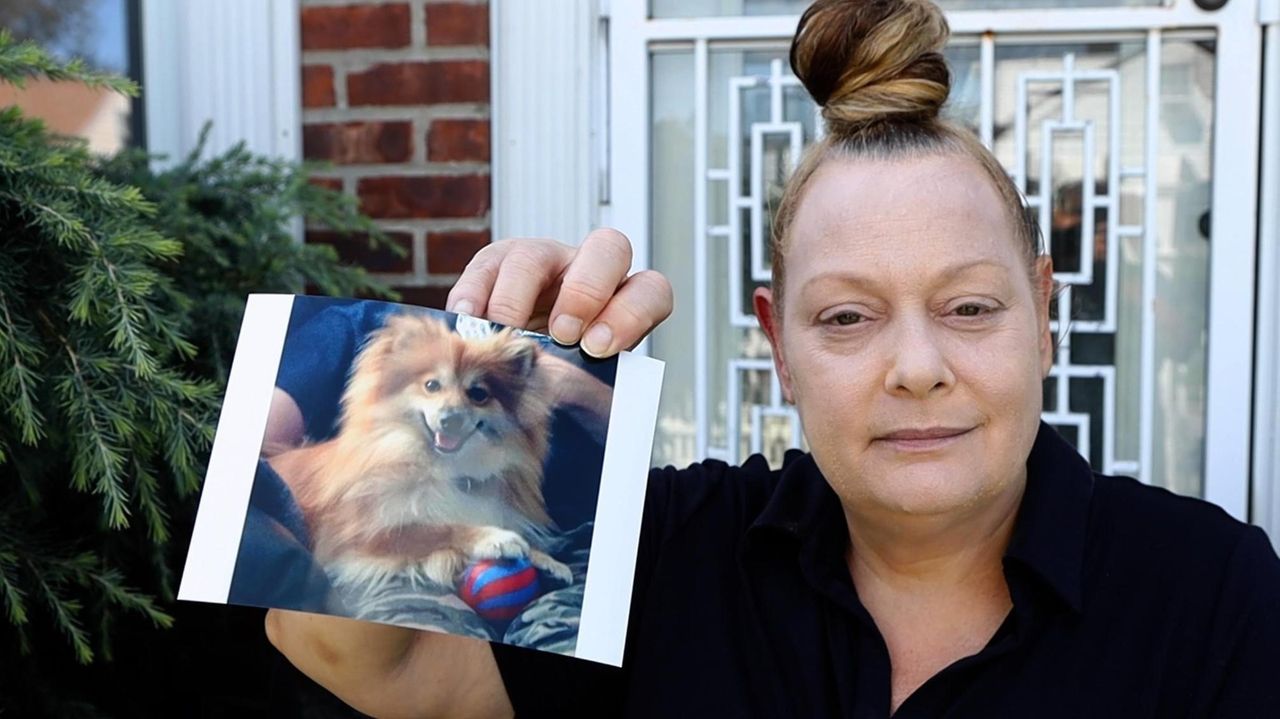 East Meadow resident Michelle Stalzer on Thursday said her Pomeranian couldn’t survive a lack of air conditioning between Aug. 4, when Tropical Storm Isaias knocked out power at her home, and Aug.10 when power was restored.  Credit: Howard Schnapp

An East Meadow woman is blaming PSEG Long Island for her dog’s death from heat stroke during this month’s Isaias-caused electricity outage.

Harley was the 6-year-old purebred Pomeranian belonging to Michelle Stalzer, who said he couldn’t survive her home’s lack of air conditioning between Aug. 4, when Tropical Storm Isaias knocked out power to Stalzer’s dormer cape — one of 400,000 outages — and Aug. 10, when electricity was restored to her and her neighbors.

Just hours before the restoration, Stalzer said, she had to rush Harley to the veterinarian after he fell ill while she tried to cool him in her Chevy TrailBlazer truck. Two days later, on Aug. 12, he was dead.

“He was the most beautiful, happy dog,” said Stalzer, 58, before beginning to weep. “He deserved to go out of this world in a better way.”

Patricia Orlando, manager at the Veterinary Referral and Emergency Center of Westbury, which treated the dog before he died, confirmed to Newsday the dog suffered from heat stroke. Kim Voorhest, the hospital manager at East Meadow Animal Hospital, Harley’s regular vet, said his temperature was 114 when he was first presented Aug. 10, and he was blue in the face and unresponsive. Normal temperatures for most dogs is between 101 to 103.

According to veterinary records, which were provided by Stalzer and summarize the visit, Harley was turning blue and panting and had collapsed outside.

“Owners do not have power in the house and have not been able to keep AC on,” the staff noted in the records.

Stalzer said she wants PSEG to apologize as well as cover the $6,000 in veterinary and cremation bills she incurred. Stalzer says she hasn’t filed a claim yet because, she says, the website offers reimbursement only for expenses like food.

“I spent whatever money I had left to save my dog,” said Stalzer, who was furloughed in March from her customer service supervisor job in Melville due to the coronavirus pandemic and was laid off in June.

Elizabeth Flagler, a PSEG Long Island spokeswoman, said she was unable to comment.

PSEG Long Island can’t be held liable for damages stemming from Acts of God such as storms and other weather-related conditions, except in proven cases of gross negligence, according to Peter V. K. Funk Jr. of Manhattan, who has practiced energy and utility law for 46 years.

Scott Kreppein, a lawyer who has handled municipal liability matters, said, “A utility can be held liable, but it has to be based upon much more than an ordinary mistake or lack of care.”

“One of the policy considerations that factors into the courts applying this standard, however, is that utilities are strictly regulated,” he said, noting that that regulators are investigating PSEG Long Island’s response.

Stalzer — who also has a longhair dachshund named Logan, 10, and a Chihuahua-beagle named Roxy, 6 — said she relied on text-messaged estimates each day from PSEG that electricity would be restored that day, or she would have made other arrangements to keep her dogs cool. Nevertheless, she tried calling motels to see whether they might be pet friendly, but had no luck, she said.

She said that after two days, the dogs began to pant heavily, and she bought a $600 portable air conditioner from Costco to plug into the one electrical outlet in her home that somehow worked — but, she said, that unit couldn’t provide sufficient cool air and anyway, in the hours before service was to be restored to fix a downed wire, power to that remaining outlet was cut and the home reached 85 degrees.

Stalzer says she spoke with PSEG supervisors and emailed the utility to no avail. The day after the death, she posted her account on a website called PissedConsumer.com.

“He was only 6 years old and had many more years ahead of him to run and play and live his life. Shame on you PSEG — you murdered my beautiful boy and you should be held accountable,” she wrote.

She added in the interview: “I don’t have children. He was my child.”

What went wrong with PSEG's storm responseAs the utility struggled to restore power, its communication system broke down. But it wasn't just the inability to field calls early in the crisis that has drawn criticism. PSEG to reimburse customers up to $250 for spoiled foodThe utility company said the agreement applies to customers who experienced an outage of 72 hours or more for some food and medicine losses from Tropical Storm Isaias.