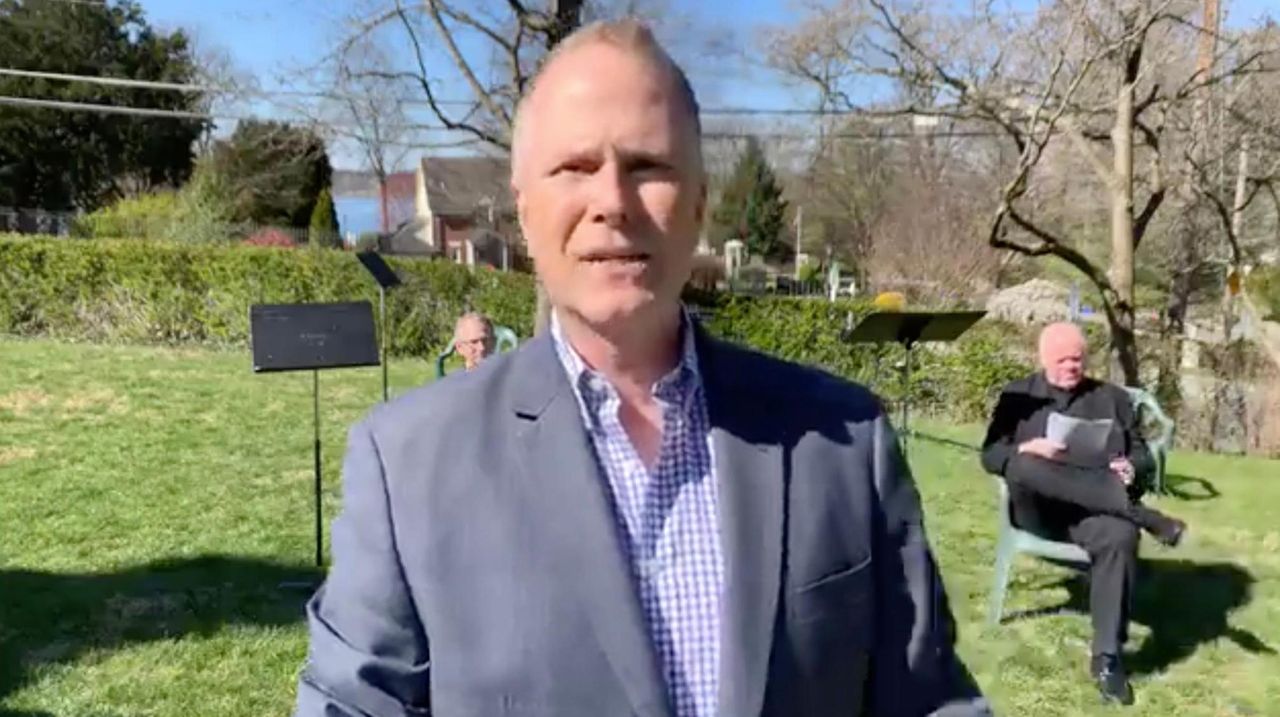 Eight churches will hold a virtual Easter service shortly after dawn on Sunday with Morgan Memorial Park in Glen Cove serving as the backdrop. This is a rehearsal for the annual bilingual service. Credit: Gaitley Stevenson-Mathews

With the help of a little online stagecraft, and a gracious hostess loaning her lawn, an ecumenical English-Spanish Easter service again will be held shortly after dawn Sunday in Glen Cove.

This year — the fourth time local churches of different denominations will gather together on Christianity’s holiest day — the service will be brought to parishioners on Facebook Live, as the imperative of social distancing during the pandemic bars sharing a pew with fellow believers.

Yet one of the underpinnings of so many faiths, said the Rev. Kevin Dillon of St. Boniface Martyr in Sea Cliff, “is human interaction.”

“Online, people are a bit more distant — they are there but not with us physically,” he said by phone. “I think it’s a reminder that the church is not confined to a building; it’s in the people who make it up.“

The backdrop for the 7 a.m. webcast, Morgan Memorial Park in Glen Cove, should be glorious: Forecasters are promising sunshine, and dawn will have arrived only 77 minutes earlier.

The park, where the service previously has been held, has been closed to curb the spread of the coronavirus.

Alba Gamble, 70, who lives in a Victorian home across from the park, is allowing the handful of priests, ministers and a bagpiper to hold the approximately 40-minute service on her front lawn.

“I’ll be on the front porch,” Gamble said. “I’m a great believer in tradition, and doing anything to help these days.”

And for her, Easter is a beloved family holiday. Raised a Roman Catholic, her family has been known to refer to it as “Eastover,” to recognize their Jewish relatives.

To Gaitley Stevenson-Mathews, an elder of the First Presbyterian Church in Glen Cove who helped organize the eight-church, English-Spanish service, this is a particularly fitting way to honor the meaning of Easter, which commemorates the day Christians believe Jesus was resurrected.

“The central message of the resurrection is one we all share,” he said. Even if the service must be livestreamed, “It’s an opportunity for these folks from different faiths and walks of life to come together,” and then take part in their own denomination’s services.

Livestreaming of the service can be viewed at www.facebook.com/GlenCoveEaster.