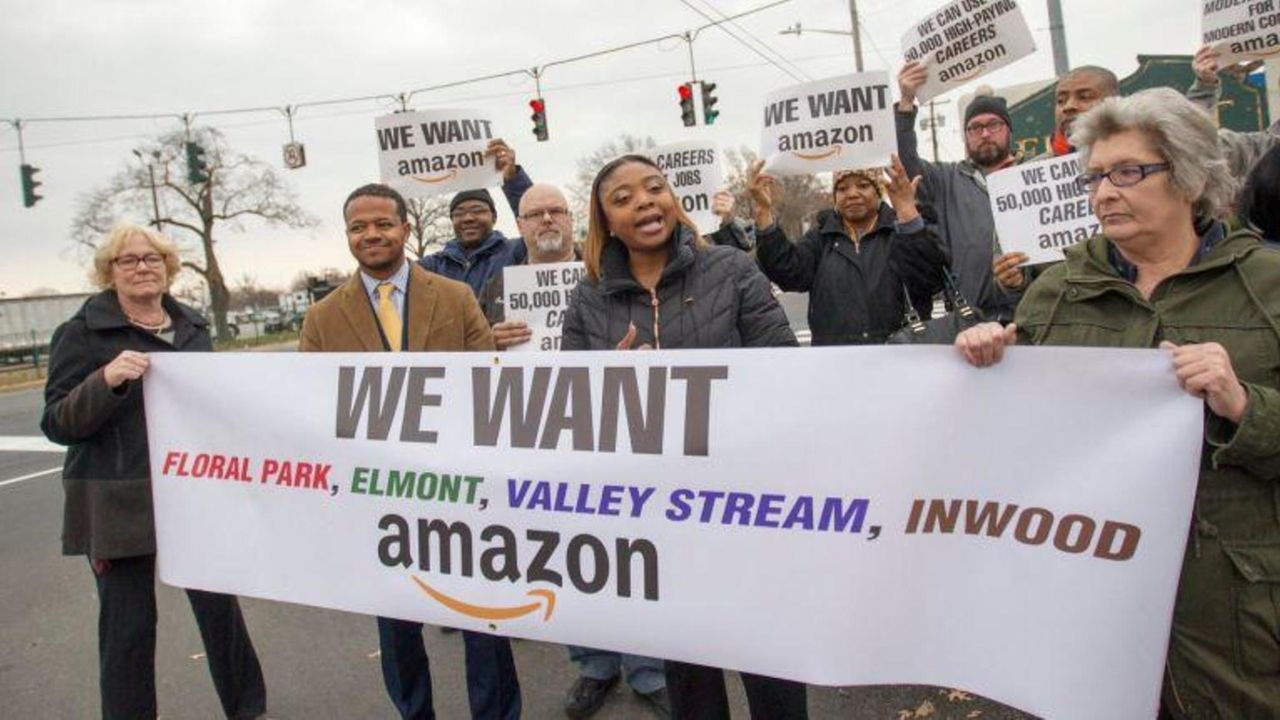 More than two dozen gathered in Elmont on Sunday, Dec. 3, 2017, to call for Seattle-based Amazon to bring its second headquarters to Belmont Park. Holding a banner across the street from the race track that said "We want Amazon," they chanted "This is my backyard" in a reversal of the oft-mentioned "Not in my backyard" cry against development. Credit: Newsday / Ted Phillips; Howard Schnapp

More than two dozen people gathered in Elmont on Sunday to call for Amazon to bring its second headquarters to Belmont Park.

Holding a banner across the street from the racetrack that said “We want Amazon,” they chanted “This is my backyard” in a reversal of the oft uttered “Not in my backyard” cry against development.

“Amazon ... is pursuing an opportunity to build a northeast headquarters,” Nassau County Legislator Carrié Solages said at the rally.

In September, Nassau County Executive Edward Mangano identified Belmont Park as a possible site for the Seattle-based company to locate its second headquarters. Communities across the U.S. are vying for the internet retailer with offers of tax breaks in exchange for jobs.

Solages (D-Elmont) said his office and other levels of government “are all actively pursuing this site as a possibility for that development.”

The site is also being eyed for an arena that would bring the Islanders hockey team back to Long Island after it left Nassau Coliseum for Barclays Center in Brooklyn.

Solages said he wasn’t against a new arena, but said the community needed the high paying jobs that a large tech firm such as Amazon could bring to the area.

Community organizer Tammie Williams said in an interview at the rally the community wants “smart growth.”

“We’re looking to the future to be technology, research and education,” Williams said.

She said the group rallying in Elmont on Sunday wanted a business like Amazon to come in that would be “bringing career oriented jobs, high paying jobs, keeping our young people here.”

“I would love to have a big Amazon here,” Ahmed said. “People would get jobs.”

Melissa Barnes, 36, commutes from Elmont to Manhattan for a job in higher education advertising. She said Long Island needs more opportunities for professionals.

“I would love to work close to home,” Barnes said. “Why should I commute an hour and a half when I could work at Amazon?”