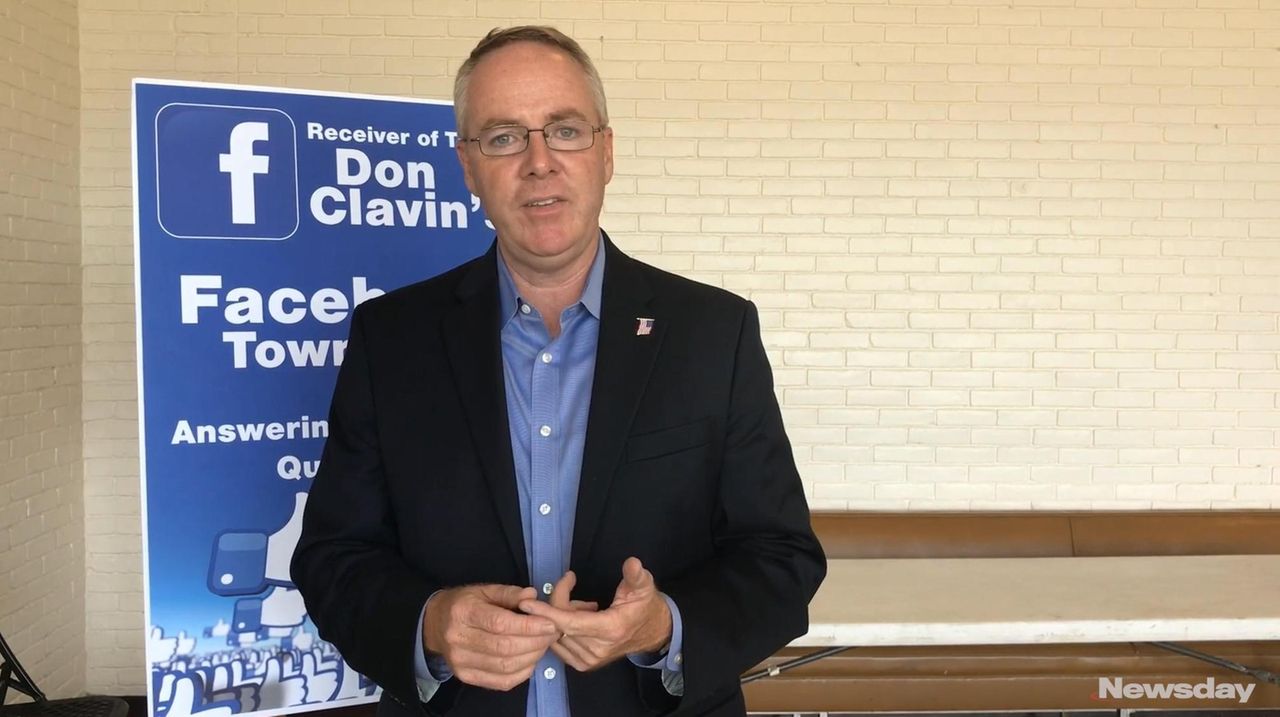 Tax receiver Donald X. Clavin Jr. answered questions from residents who posted on his Facebook page, as well as from members of the audience at the town park, about their taxes, assessments and grievances during the live Facebook town hall.

He plans to hold more Facebook town halls, including at night to accommodate residents’ schedules.

“In this day and age of social media, it’s only necessary that we expand the program,” he said in an interview.

.@TOHReceiver @DonaldClavin’s staffers are monitoring the Facebook Live comments and passing him the questions. pic.twitter.com/vVF8E9znB6

“This is the first Town Hall Facebook that we know of in the area,” says @TOHReceiver @DonaldClavin.
He says he wants to reach residents through different ways and notes his day+night seminars.

Clavin said attendance at his tax seminars has ballooned, and he wants to reach residents who can’t make the programs but can watch online.

Clavin has ramped up his presence in the town in recent months, holding many news conferences about the federal tax overhaul and the Nassau County assessment system. His name has been floated as a possible Republican challenger in the town supervisor’s race against Democratic incumbent Laura Gillen, though Clavin has said he’s happy in his current elected position.

About a dozen people attended Tuesday’s town hall at Lido Beach. The Facebook Live posting on Clavin’s page showed that it had 127 views about an hour after the event had ended.

Clavin urged residents to challenge their own assessments, saying they didn’t need to use attorneys or companies that take a cut.

“You can do it yourself and you can win,” he said.

Patricia Rosendale, 79, of Inwood, said she uses a company to grieve her taxes and they take a 40 percent cut. She gets a senior citizen exemption.

One person asked via Facebook: “My house is very similar to my neighbor’s. Why are his taxes lower than mine?”

Clavin said it was probably due to assessment challenges and exemptions.

“It is no guarantee it’s going to fix the system,” Clavin said.

Velma Boehler, 75, of West Hempstead, said she was concerned about a $1,100 federal refund she received on Monday. She paid about $1,500 in federal taxes.

“I don’t want to cash a refund that I’m not entitled to,” she said.

She said she typically saves $1,500 between an assessment challenge and a STAR exemption, but half goes to a company that grieves her taxes.

“You wonder whether or not it’s worth it,” she said.