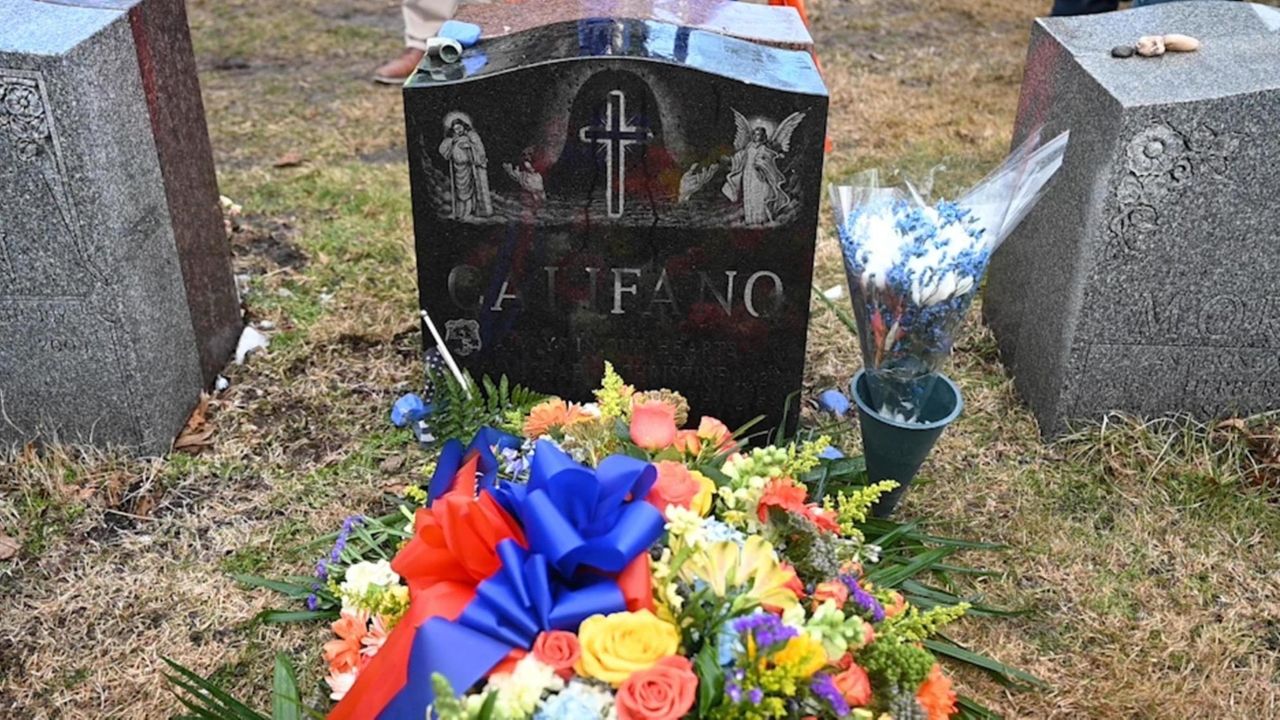 Family members and local officials gathered to honor Michael Califano, who was struck and killed by a vehicle on the Long Island Expressway 10 years ago while working as a Nassau County Police Highway Patrol officer. Credit: Newsday / Alejandra Villa Loarca

Scores of Nassau County police officers lined Holy Rood Cemetery in Westbury on Friday morning under a cloudy sky to remember a fallen brother who, in the words of Police Commissioner Patrick Ryder, was a "hero" who made the ultimate "sacrifice."

Officers stood at attention. A color guard marched. A police helicopter flew overhead. A prayer was said, and bagpipes played.

"Michael Califano was a hero. You three boys need to hear that," Ryder said, turning to Califano's sons: Michael, 23, Christopher, 21, and Andrew, 16. They, along with their mother Jackie, and other family members, were gathered beside Califano's grave, which was adorned with a floral wreath bearing the insignia of the Nassau County Police Highway Patrol.

The memorial marked the 10th anniversary of Califano's death on Feb. 5, 2011. The night before, the highway patrolman had pulled over a truck for insufficient lighting before a flatbed tow truck slammed into his patrol car on the Long Island Expressway near Exit 39 in Old Westbury.

In 2013, a prosecutor asked a judge to dismiss the criminally negligent homicide charge against the driver of the tow truck, John Kaley of Connecticut, citing insufficient evidence to convict, despite her belief that Kaley had been asleep at the wheel. Kaley pleaded guilty instead to reckless driving, a misdemeanor. He was not given jail time, though his license was revoked.

Speaking to the family, Ryder said: "Jackie, you need to know that we will never, ever forget the sacrifice that Michael made. Our heroes go out and put their life on the line every single day for complete strangers. … The man that took your father’s life that night never spent a day in jail. He got hit with a $500 fine. That’s the price they put on the sacrifice that your dad made protecting us."

Nassau County Executive Laura Curran told the family she hoped the ceremony would give them "some comfort and some solace on this grim day." She added: "And I want you to know we are with you, we grieve with you. … We’re going to continue to honor Mike, and just remind everyone what this job is. It’s dangerous."

Nassau Police Benevolent Association president James McDermott told the family: "We’re going to be there for each other forever. Jackie, I think you know that. … You guys, you’re the best. You’re great sons. … Who doesn’t remember young Michael with his father’s hat on in that freezing cold funeral? … Now they’re young men. They’re good young men."

At the ceremony's conclusion, Jackie Califano said, "It brings you back to the week that he passed and just the outpouring of help, just showing what Michael meant. It feels that overwhelming all over again."

She said that over the years, her husband's colleagues have not forgotten her family. "They've always been there, checking in," she said, as tears trickled down her face.

She said the family and several officers early Friday went to the spot where her husband was killed. "We try to go every year, if the weather allows," Califano said.

Califano said this latest trip was more "overwhelming" than others, since officers who had served with her husband were there as well.

Her eldest son, Michael, said the anniversary was a "milestone I guess I didn’t think I would ever have to experience this young in my life. It feels like only yesterday. But at the same time, it feels like forever, seeing how people have changed … seeing that the love is still there really helps. My family feels loved. Even though we lost my dad, we gained a whole family."