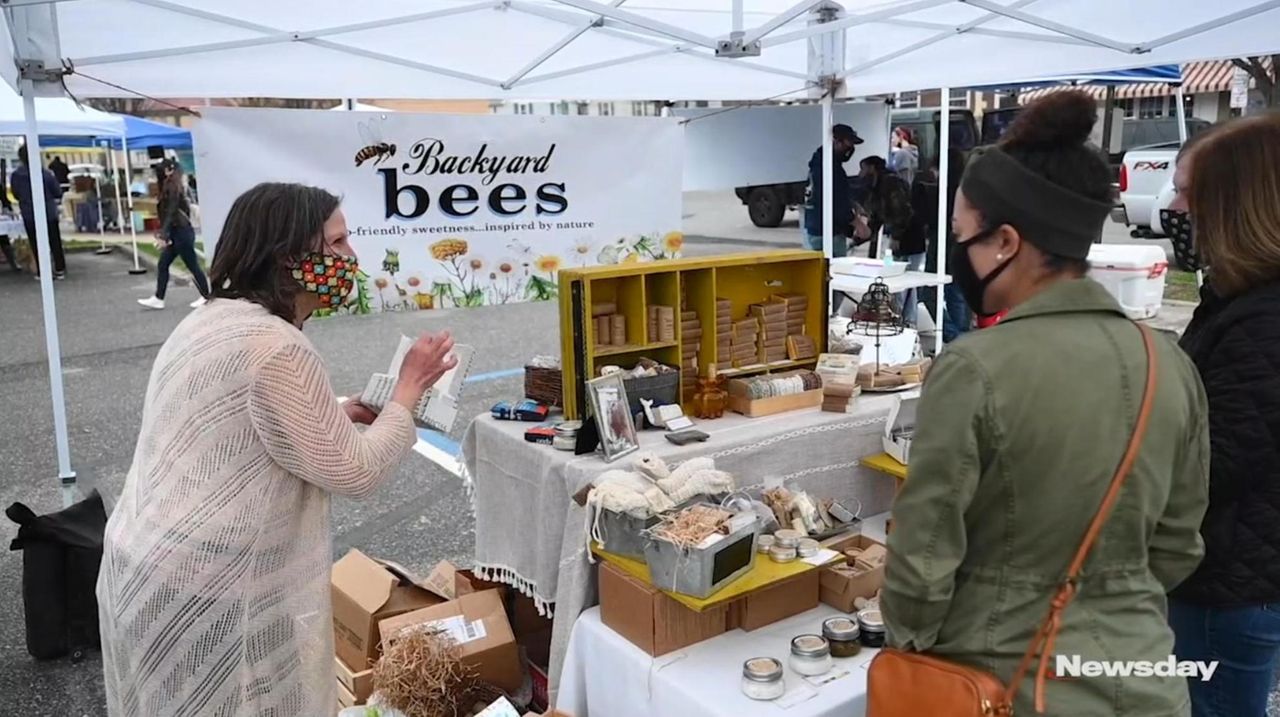 A farmers market in Oyster Bay born of the pandemic last year continues to grow even as vaccines bring hope that life is beginning to return to normal.

The market on Audrey Avenue returned last month for its second year, with 26 vendors signed up to sell their food and products compared to about 15 when it first began, said market manager Laura Escobar.

"Open-air markets were, I think, the biggest thing that happened in 2020," Escobar said. "It’s going to be a bigger thing as we go in the future. People aren’t going to be so comfortable going inside for a long time."

The Oyster Bay Market, sponsored by the Oyster Bay Main Street Association, is slated to operate every other Sunday on Audrey Avenue from mid-March through November. Escobar, who lives in the hamlet of Oyster Bay and works in quality assurance for a medical informational technology company, said she had the idea for the market in late spring of last year.

"It was a really scary time for a lot of people," Escobar said. "I just had a moment of like, ‘I don’t want to go out … not even going into a store."

After discussing the idea with a local shellfisherman friend, she said she brought the idea to the Main Street Association that sponsors local initiatives. They then started looking for vendors, and the first market opened in July. Social distancing rules meant the space, originally just the municipal parking lot behind a town government building, was limited.

"We had everybody spread out," Escobar said. "In a perfect world we could have had double the amount of people … but we only could fit so many people in the space."

Carolina Carleo, who co-owns the Italian food store La Favorita in Oyster Bay, said the market helped her business at a time when it was struggling but also helped the community.

"We all needed this so much because of what happened with the pandemic; it secluded all of us," Carleo said. Shopping in the open air was an antidote to fear and isolation, she added.

"We all needed to connect, to see each other somehow in the outdoors," Carleo said.

The market let her business stay connected with old customers and create new ones.

"Everybody on a Sunday, especially in the summer, the last thing they want to do is be inside somewhere, even to buy a sandwich," she said.

Beagan Gooth, a family member of the Youngs Farm in Old Brookville, sells vegetables and fruits at the market.

"People felt more safe to go to an outside market than to a traditional supermarket," Gooth said. "It was nice to interact with the people and customers, especially last year."

Escobar said the market brought a sense of community at a time when people needed it.

"This is not just people setting up a tent, you know selling stuff," Escobar said. "This is like everybody knew each other and they were supporting each other."

Several safety measures will be in place at the Oyster Bay Farmers Market:

* No sampling of products

* All producers must wear face coverings

* Masks and gloves are available for shoppers

* 6 feet of social distancing is required