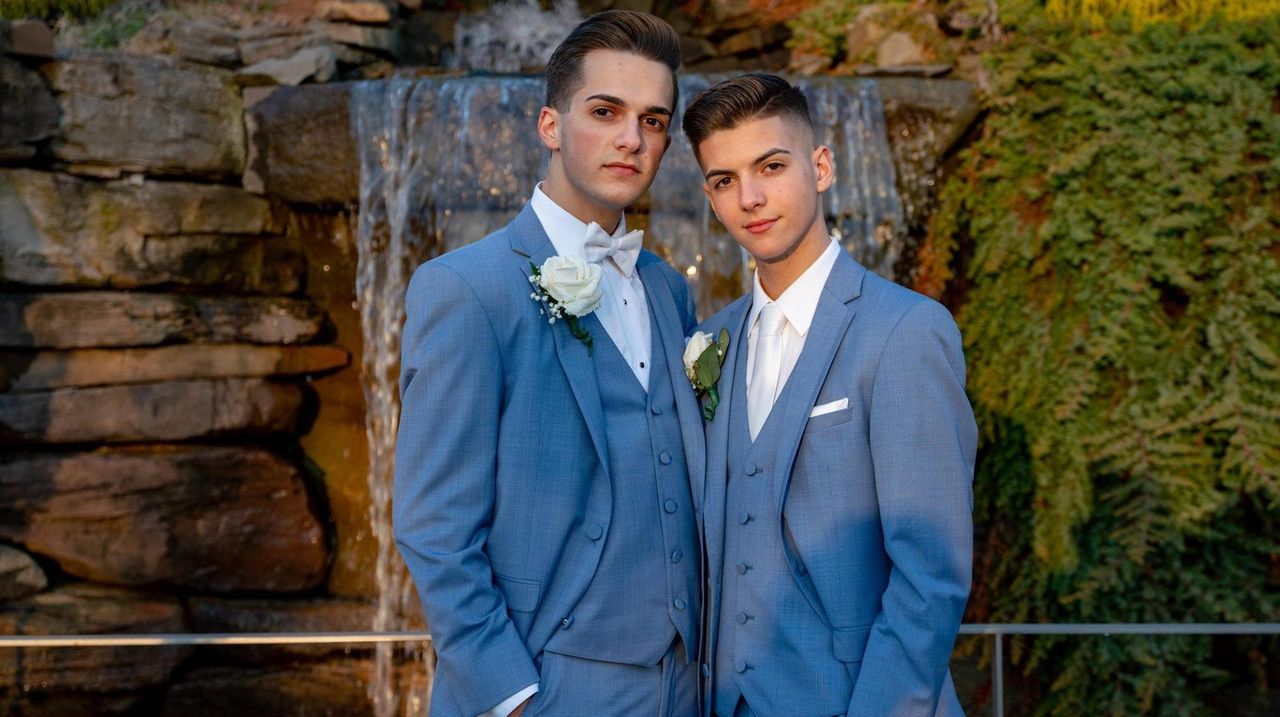 On April 6, students attending the Farmingdale High School junior prom at Crest Hollow Country Club in Woodbury talked about their fashion choices and embracing what makes them stand out. Credit: Jennifer A. Uihlein

When Michael Haggerty was considering how he might invite his boyfriend to Farmingdale High School’s junior prom, he had one rule: “Life’s short. Go big.”

Haggerty, 16, says his relationship with Dylan Tobie, a Kellenberg High School senior whom he met at callbacks for a local production of “Legally Blonde,” has been built on grand gestures.

When Tobie, 18, asked Haggerty to be his boyfriend last September, he pretended to have a flat tire and had Haggerty get out of the car and check the trunk for a spare. But instead of a tire, Haggerty was met with a rose and a sign that said, “Will you be mine?”

Then, to celebrate one month of being together, it was Haggerty’s turn to pull out all of the stops for his promposal.

Haggerty arranged a scavenger hunt for Tobie. He gathered a group of their friends and had each person wait at a spot that was significant in the couple’s relationship — including Seaford Cinemas, where they had their first date, and Haggerty’s house, where they shared their first kiss.

Tobie ultimately found himself on a train headed toward Manhattan to have lunch at Planet Hollywood.

Haggerty told Tobie, “That’s it, that’s the surprise, we’re having lunch with all of our friends!” But he still had a few more tricks up his sleeve.

A friend pretended to have a stomach ache and excused herself from lunch, presumably to go to a nearby CVS for Tums. In accordance with their plan, Haggerty offered to go with her.

“When he left … I was actually really upset,” Tobie said. “I was like, ‘OK, whatever. That was fun for what it was, we’ll just go home.”

But Tobie started to suspect something after leaving Planet Hollywood. His friends said they were going to find Haggerty, but the group headed in the opposite direction of the nearest CVS. Then, as they approached Times Square, someone covered Tobie’s eyes.

When the friend uncovered his eyes, there was Haggerty, blasting “Shallow” from “A Star is Born” and holding up posters “Love Actually” style — a fitting promposal for Farmingdale’s Hollywood-themed prom.

The posters featured titles of songs from “A Star is Born,” like “Always Remember Us This Way” and “I’ll Never Love Again” woven in with declarations of love and commitment, before the last sign asked the big question: “Will you go to prom with me?”

It wasn’t long before both of them were crying.

“It was emotional to have the crowd around us,” Haggerty said, explaining that people had gathered to watch the promposal. “That’s what I wanted because … that’s how our relationship is, it’s very out there.”

Haggerty’s mom, Yolanda Aponte, was his audience when he practiced flipping posters and was impressed by how creative her son and his peers have gotten with promposals.

The promposal and the prom, which was held April 6 at Crest Hollow Country Club, were extra special for Tobie because his school doesn’t have a prom.

Though he had accompanied friends to their schools’ proms in the past, “it’s not the same as when you go with someone you love and someone you’re in a relationship with,” he said. “It’s pretty special.”