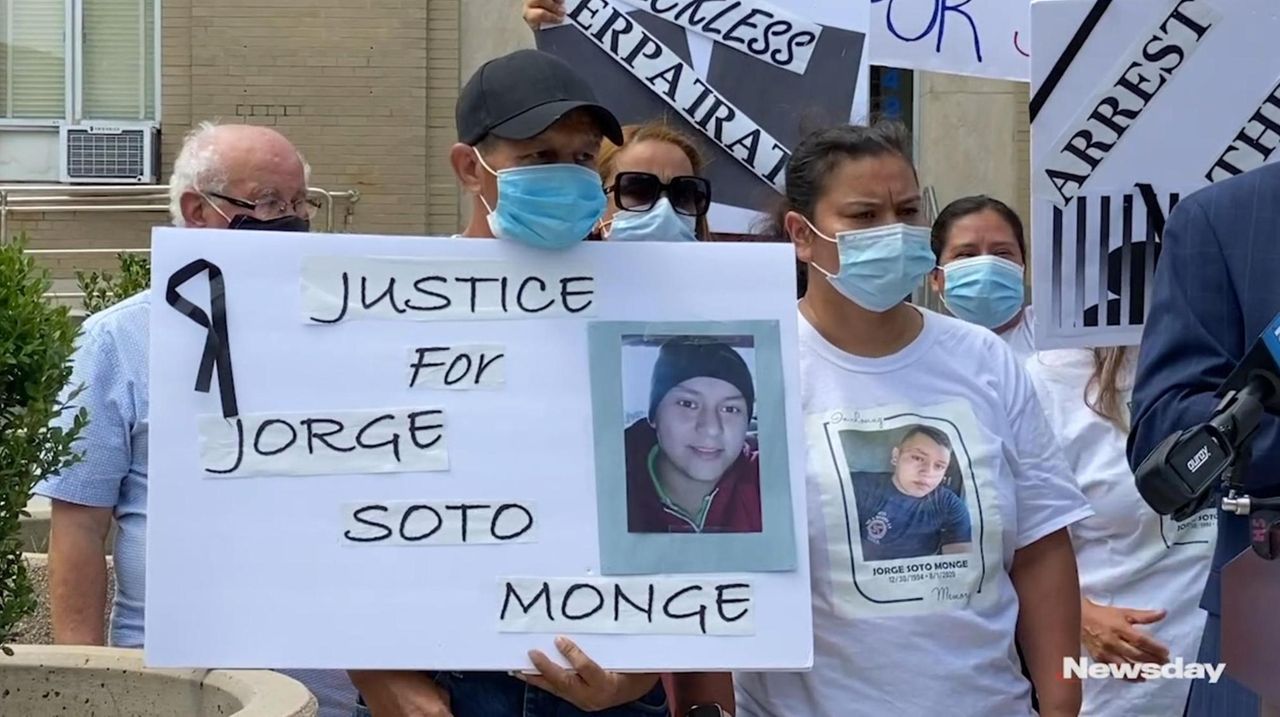 The family of Jorge Soto Monge says Nassau County police have not done enough, and should arrest and punish those responsible for their son's boating death on Aug. 1 in Freeport Creek. Newsday's Chelsea Irizarry reports. Credit: Howard Schnapp and Jim Staubitser

Demonstrators held a rally in front of Nassau County police headquarters Friday, where they called for the arrest of a man who they said was responsible for causing a boat collision that claimed the life of a Freeport man.

Assemb. Phil Ramos (D-Brentwood) spoke before a crowd of supporters who said they were demanding justice for 25-year-old Jorge “Tito” Soto, who was killed when two boats collided in Freeport Creek on Aug. 1. Six other people were also injured in the crash.

Ramos said the driver of one of the boats -- who has not been identified by police because he has not been charged with a crime -- was operating a boat recklessly and has been given favorable treatment by police. He said Soto’s family has been treated poorly by investigators.

“Understand that high speed, if I was driving down this street at 100 miles an hour and killed somebody, I would be arrested,” Ramos said. “That is a reckless homicide. We are seeking justice. We are seeking justice now and if they think that this is just another case where the Hispanic community, or communities of color, are going to walk away … that’s not going to happen.”

Nassau County Police Commissioner Patrick Ryder strongly denied the allegations by Ramos and Soto’s family, including that anyone has been given preferential treatment or that Soto’s family has been treated poorly because of their ethnicity.

Ryder said no one has been arrested in the case because no crime had been committed.

“A young man has lost his life in a boating accident," Ryder said. "And I say accident because there have been 10 witnesses that have been spoken to. They all give similar stories about the accident."

He said the parties involved were “tested for alcohol," and the police investigation has been thorough and impartial. He said if the police find any evidence of criminality, he would confer with the district attorney.

Ryder also said there has been no evidence to support allegations of a cover-up, calling the claim “factually untrue,” and said of the complaints of bias against Soto’s family, “That’s not true and that’s not fair.”

At the rally, Ramos said police never treated Soto’s family with dignity, saying they never met with them in person and offered the family condolences, or kept them up to speed on the investigation.

But Ryder said investigators have been in contact with Soto’s brother, and released the accident report to the family on Thursday. He said police had to wait to disclose information because “We can’t be wrong.”

Soto's parents said they were heartbroken by their son’s death. He was described by his mother as a happy man and a hard worker who had many dreams that will go unfulfilled.

Soto’s father, Jose Soto Monge, broke down while speaking about his son.

When asked if the police have helped his family, he said in Spanish, “Absolutely not.”