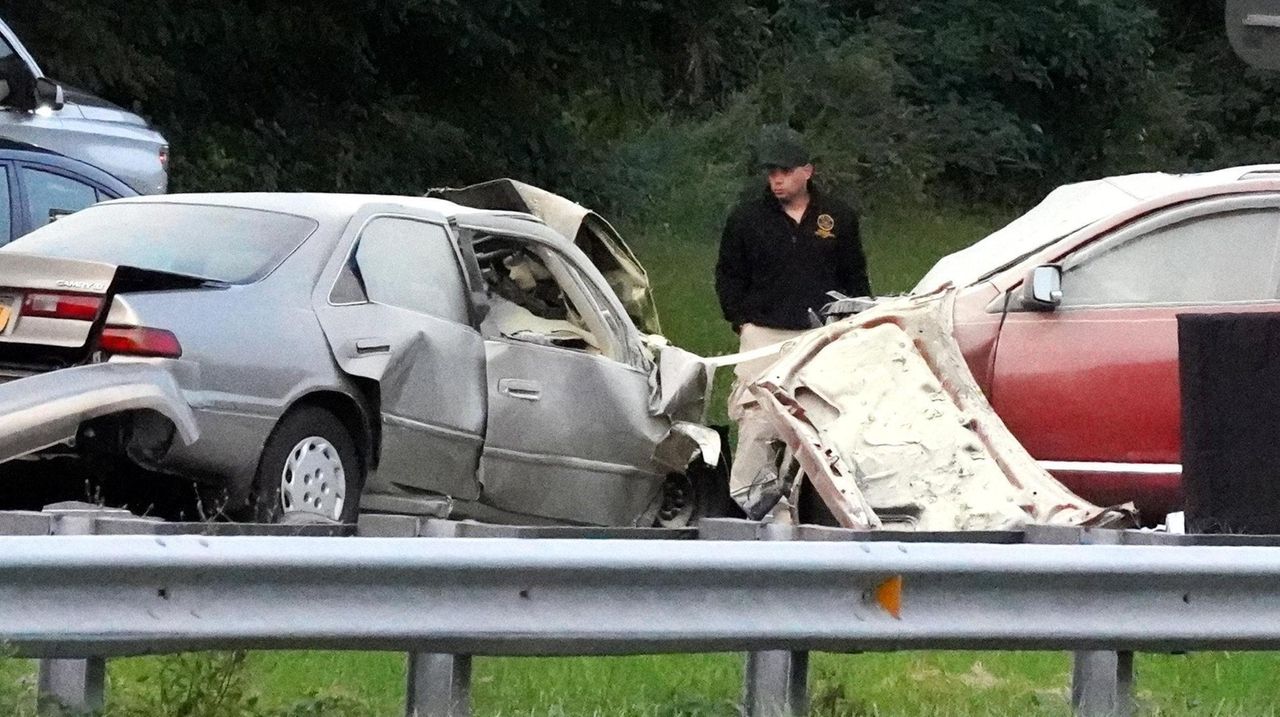 The eastbound Southern State Parkway was closed on Tuesday morning near Exit 27 in Wantagh for a multivehicle accident with "multiple fatalities," State Police said. Here is Newsday's Chelsea Irizarry with the story. Credit: Newsday

This story was reported by Matt Clark, Carl MacGowan, Antonio Planas, John Valenti and Dandan Zou. It was written by Planas and Valenti.

A wrong-way crash early Tuesday on the Southern State Parkway in North Massapequa killed four people and injured two, including one seriously, and sparked a chain-reaction collision, state police said.

The fiery crash occurred about 5:10 am when a 1998 Toyota Camry going the wrong way on the eastbound parkway hit a 2011 Nissan Rogue head-on between Exit 29 and Exit 30. The driver of the Camry, Marvin Balcaseres, 33, of Farmingdale, died, as did three others in the Rogue, identified by police as driver Ruben Sanchez-Flores, 67, and passengers Edith Magana, 56, and Ivis Sanchez-Cordova, 34, all of Hempstead.

The victims in the Rogue were headed to work in Farmingdale at the time of the crash, police said.

"At approximately 5:10 a.m., we received additional phone calls that the vehicle had collided with another vehicle, west of Exit 30," Mohl said at Troop L headquarters in East Farmingdale.

Five state police troopers were on the parkway at the time of the 911 calls, Mohl said, but the crash occurred before they could intervene.

When troopers arrived, Mohl said, they found a "chaotic scene."

Smoke and flames billowed up from the wreckage. Debris, including antifreeze and engine oil, had spilled across the parkway. Oncoming vehicles swerved to avoid scattered debris before troopers eventually shut the eastbound roadway down.

A third passenger in the Rogue, Nadia Sanchez-Cordova, 44, also of Hempstead, was taken in critical condition to Nassau University Medical Center in East Meadow, police said. She was riding in the front passenger seat, police said.

After the initial collision, a 2011 Suzuki SUV struck the Camry while attempting to avoid the crash. The driver, Steven Miller, 50, of Queens, was not hurt, police said.

The Camry had entered the parkway at either Exit 30 or 31, Mohl said.

"Once we can determine where he entered, we’ll ensure there were proper markings," Mohl said.

The eastbound lanes of the parkway near the crash site were closed for five hours while investigators used "drone technologies for forensic mapping of the scene."

Mohl said the investigation into the cause of the crash was ongoing and anyone with information should call state police at 631-756-3300. Department of Transportation cameras are on the Southern State Parkway, but they monitor traffic and don't record, Mohl said. Investigators were hoping to obtain video from businesses or private residences that could help retrace Balcaseres' route before he drove onto the parkway, Mohl said.

Autopsies will determine whether alcohol or drugs were involved in the crash, police said.

Fatal wrong-way crashes are uncommon on Long Island, although there have been more than a dozen in the past 30-plus years.

According to the federal government's Fatality Analysis Reporting System database, a driver traveling the wrong way on a one-way road was listed as a factor in only two of the 998 fatal crashes on Long Island between 2014 and 2018, the most recent data available. Of the 43 fatal crashes on the Southern State Parkway in that period, none listed a wrong-way driver as a factor.

In July 2005, wrong-way driver Martin Heidgen slammed into a wedding limo on the Meadowbrook Parkway, killing driver Stanley Rabinowitz, 59, and flower girl Katie Flynn, 7. Authorities said Heidgen, 24, had a blood alcohol content of 0.28%. He was sentenced to 19 years in prison.

Site of crash no stranger to fatal collisionsThe 10-mile stretch of roadway, nicknamed "Blood Alley," has been the scene of several deadly crashes over the years.