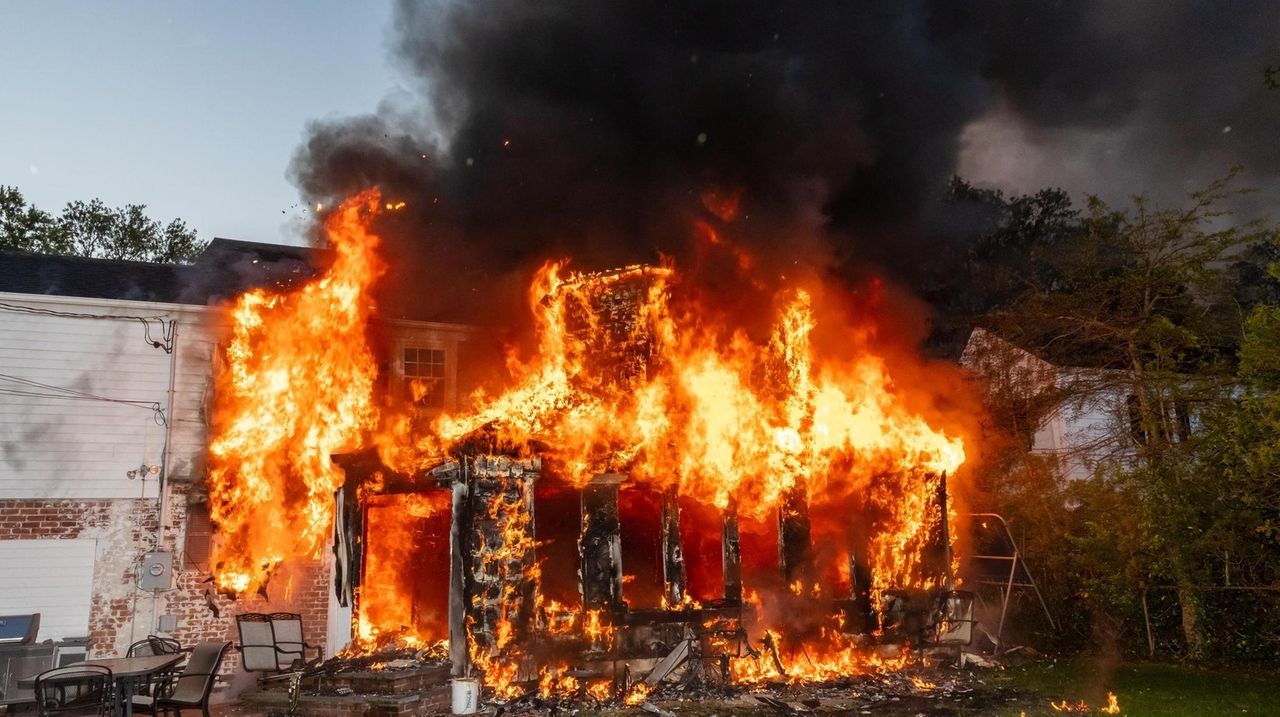 A fire tore through a Garden City house just before sunrise Thursday, killing three members of a family inside, including an 18-year-old high school student, according to officials.

The fire was one of two blazes Thursday morning that forced Nassau County to deploy almost all its firefighting departments, the office said.

"We are heartbroken to learn that the devastating house fire claimed the lives of three beloved individuals, including a Garden City High School student," the letter said. "This tragedy affects our entire community as we mourn this immeasurable loss, and our hearts go out to everyone who knew them."

The fire broke out at 5:38 a.m. at the Washington Avenue house, according to Nassau County Assistant Chief Fire Marshal Michael F. Uttaro at an early afternoon briefing. The house is a two-story Colonial, built in 1948, according to county records.

The victims' identities have not been publicly disclosed. Nassau County Police Commissioner Patrick Ryder, after an unrelated briefing in Mineola, told Newsday that the victims are related, but he declined to name them, pending notification of out-of-town relatives.

"Three lives were lost," Ryder said. "They don’t know the cause yet," he said, adding: "Unfortunately, the entire house was gutted from the fire."

Uttaro said the fire is not believed to be suspicious but the cause is not yet known.

Speaking earlier Thursday, Uttaro said firefighters, redeployed from a "massive" fire at a trash center in Westbury, responded to the home quickly.

Upon arriving to the Garden City fire, the firefighters were "met with very heavy fire throughout the house," he said. It took the "better part of two hours" and firefighters from a dozen departments to bring the blaze under control, he said.

One Garden City police officer was taken to a hospital to be treated for smoke inhalation and "is doing OK," Uttaro said on Thursday afternoon.

The officer had attempted to enter the house and kicked in the front door, but could not get in because of the smoke, Ryder said.

"He took in a lot of smoke," Ryder said. "He was treated at hospital. He will be fine."

Two firefighters suffered injuries but declined to be taken to hospitals, Uttaro said.

The fire also damaged the outside of a neighboring home.

The Westbury fire, which disrupted service on the Long Island Rail Road, was battled by firefighters from more than four dozen departments.

Nassau County Executive Laura Curran extended her condolences to the Garden City victims and hailed the fire departments' response to both fires.

"Our hearts go out to the victims, and of course to their families," she said. "I have to really commend the quick and very brave action of our firefighters here in Nassau County."

This is the first time in recent memory that almost all 71 of Nassau County‘s fire departments have been called out to fight fires at the same time, Uttaro said: "It was an historic night for the Nassau County fire service and all the mutual aid."

The Garden City superintendent said that school's counselors and psychologists are available to students, and she added: "We plan to memorialize the family and honor their lives in whichever ways circumstances allow."

By midafternoon, firefighters had left the scene, and windows and the front door to the home had been boarded up, with a fence placed around the property.

Alison Volpe, head of the district’s Parent Teacher Association, said the PTA tied blue, white, purple and pink ribbons on trees and poles on streets from the family’s home to the school, in the family's memory.