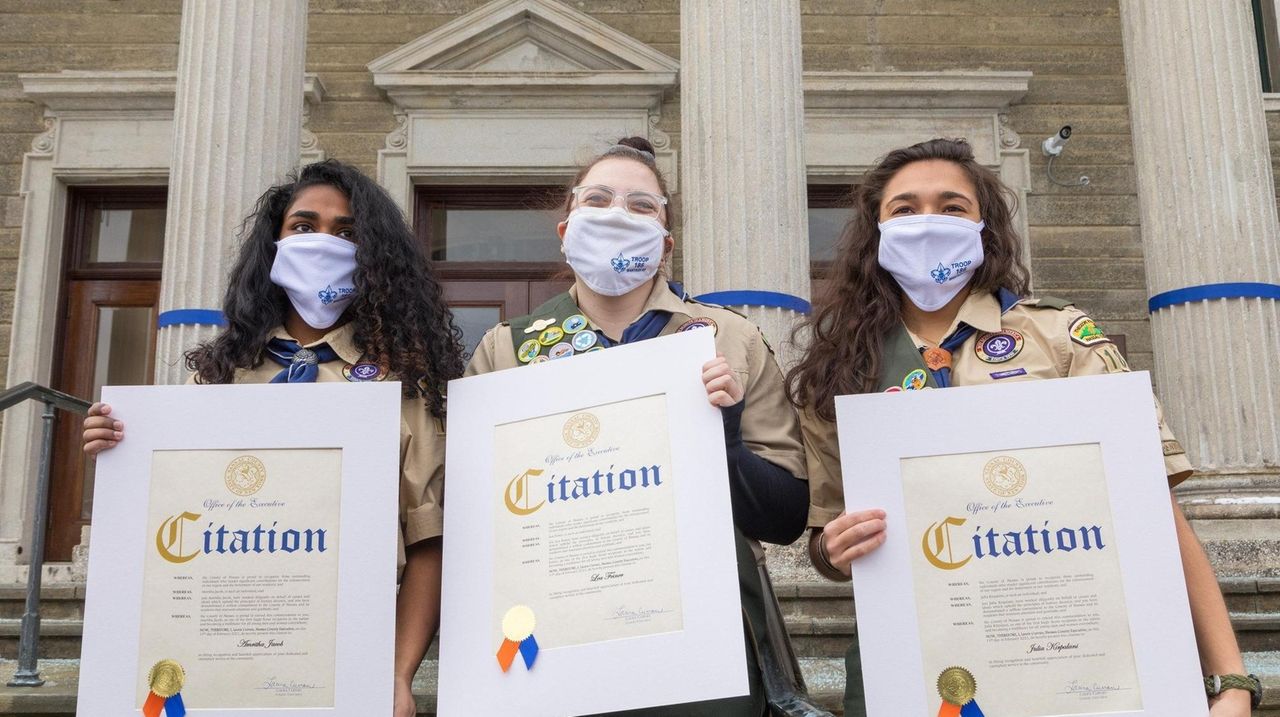 A quartet of Long Island "trailblazers" have cracked the glass ceiling of Scouting, becoming the region's first female Eagle Scouts and joining an inaugural class of hundreds of young women nationwide.

"I'm really happy that we get to set an example for a new generation of Scouting," said Amritha Jacob, 17, of Bellmore, a senior at Calhoun High School in Merrick. "Because this is setting a precedent for all other female Eagles that come after us. It's really honoring."

Nassau County Executive Laura Curran on Thursday awarded citations to Jacob, Julia Kirpalani, 17, of Merrick and Lea Feiner, 18, of Levittown, all members of Troop 186 in Wantagh who made history as the county's first three female Eagle Scouts.

Summer Levinsky, 18, of Huntington Station, a member of Troop 218 in Huntington Station and a freshman business economics student at SUNY Oneonta, is the first and only female to attain the Eagle Scout rank in Suffolk County.

All four teens were initially involved in the Girl Scouts and most had siblings in the Cub Scouts or Boy Scouts.

"This would have been unthinkable a few years ago," said Curran at a ceremony in Mineola. "These trailblazers have really busted through and gotten it done."

While young women have been part of Scouting in coed programs for years, the Boy Scouts of America only began admitting females in February 2019 following a rebranding of the organization. The Boy Scouts program became Scouts BSA, although the national organization retained its name.

Eagle Scout is the program's highest rank, attained by only about 6% of Scouts, officials said.

To earn it, a youngster must progress through Scouting’s seven ranks, obtain at least 21 merit badges, serve in leadership positions and compete a large community service project.

Jacob's project involved beautifying the landscaping of the Bellmore Presbyterian Church while Kirpalani supported the VA Hospital in Northport, collecting toiletries, organizing a garden cleanup and collecting Uber gift cards for veterans to use to travel to doctor's visits.

"So many girls before us have wanted this," said Kirpalani, a senior at Calhoun who will attend Washington University in St. Louis in the fall. "And to stand on the shoulders of everyone whose made this possible — it's our utmost honor to be the face of that change and to set that example."

Feiner, a freshman at Nassau Community College, volunteered at the Wantagh Animal Shelter, building perches for cats and other pets who had no visitors during the pandemic.

"Standing here today with our Eagle rank means that the future of Scouting has now solidified a place for girls at its highest level," she said. "And we get to be the face of that, which is absolutely incredible. There are no words to describe how incredible this feels."