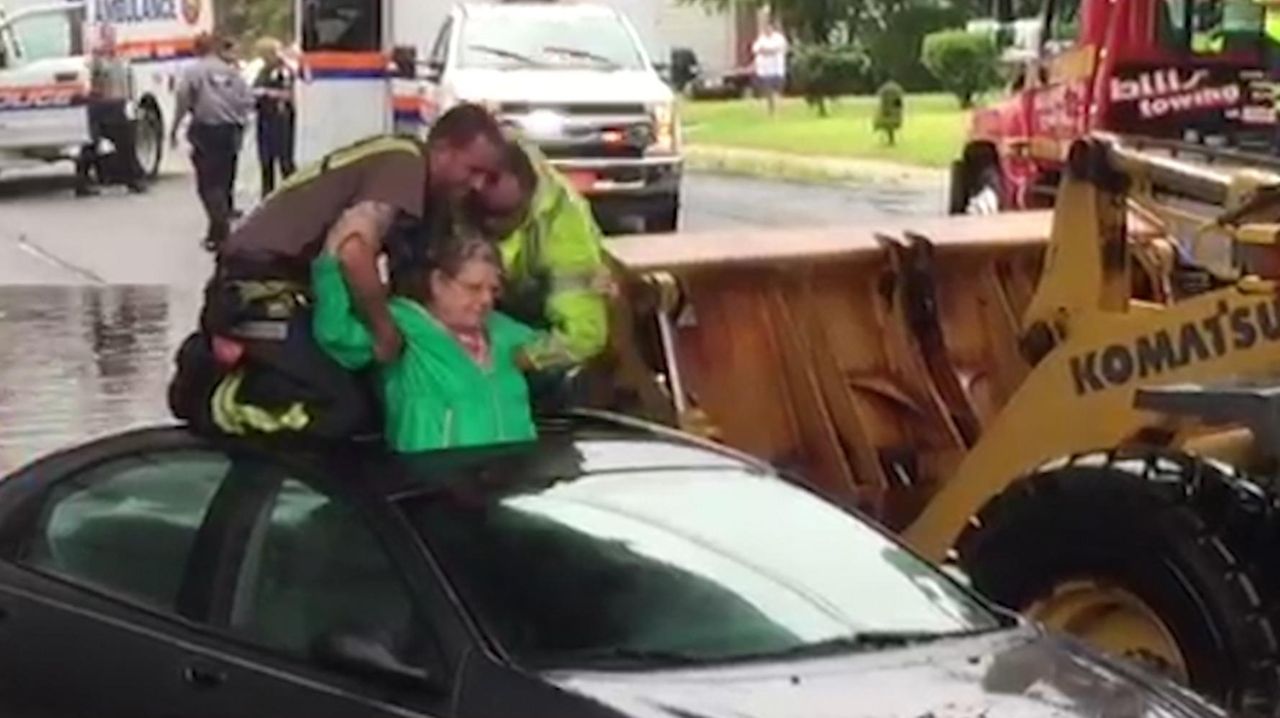 Resourceful firefighters and a heavy machine operator used a payloader to rescue a couple whose car became partially submerged in Farmingdale during the quick-hit torrential rainstorm on Friday, Aug. 18. 2017. Credit: Philip LoNigro

A video shot by Farmingdale Fire Department volunteer firefighter Phil LoNigro, 55, of Farmingdale, showed the stranded man and woman being pulled to safety through the sunroof of their car by firefighters who got to the vehicle in the bucket of a Farmingdale Department of Public Works payloader.

The midmorning rescue took place at the railroad trestle on Merritts Road near the intersection with Fulton Street.

The vehicle was one of three that got stuck when floodwaters rose quickly in the dip under the trestle, LoNigro said.

He estimated the water depth at about 3 feet.

He said the other motorists were able to get out of their vehicle and reach higher ground.

Nassau police “requested us and when we got there our [deputy] chief, Ryan Tortoso, immediately saw the situation and requested the DPW,” LoNigro said.

As it happens, all three of the firefighters who manned the payloader also work for the DPW — and Michael Tortoso was out driving it, part of the flood cleanup crew after the brief but intense rainfall, when the request for help came in, said his brother, Deputy Chief Ryan Tortoso, 33.

Good Samaritans had alerted the firefighters shortly before the police received the 911 call, he said.

The payloader made the rescue much safer for everyone, said the deputy chief, who directed the rescue from the command post about 15 feet away.

Had the fire department used the ladder truck, firefighters would have had to wade into the flood to get to the flooded car.

That can prove hazardous if, for example, the floodwaters have washed away sewer caps, creating deep holes, Tortoso said.

And the two people in the car would have needed much more help climbing onto the ladder than stepping into the bucket, he explained.

“It was so much easier and safer to get them into the bucket,” he said. “I didn’t want to put my members at risk.”

The payloader’s high engine gives it another advantage, making it less likely to stall, he noted.

Firefighters John Langon and Ryan Stone, who were in the bucket, helped pull the man and woman out through the car’s sunroof, the deputy chief said.

Their clothing appeared drenched up to their ribs; Tortoso said their vehicle had flooded when they tried to escape by opening the doors.

But “They couldn’t open the doors because of the weight of the water,” he said.

LoNigro said the man and woman were assessed and evaluated by EMTs, who provided them with blankets.

The video shows the second car that also failed to make it all the way through the trestle, as well as the SUV that stalled just a few feet after it was driven through the floodwaters.

There was another complication, the deputy chief said.

“When they were in their vehicles, another large vehicle, a truck came by and kind of moved the vehicles in the water to the side,” he said. But the truck driver, perhaps eager not to stall, might have been moving too swiftly to notice what happened, he said.

“We used to go over there a lot,” LoNigro said of the area under the railroad bridge, but said that section of road has rarely flooded since it was redesigned several years ago.

“I’d say it’s probably been four, five years since we had a call there,” he said, adding the water was so deep “it was like a river.”

Tortoso had a bit of advice for motorists confronting possible floods.

“Just like everybody else says, ‘If you see a large pool of water, and you’re not sure, don’t go in it,’ ” he said. “Just turn around.”