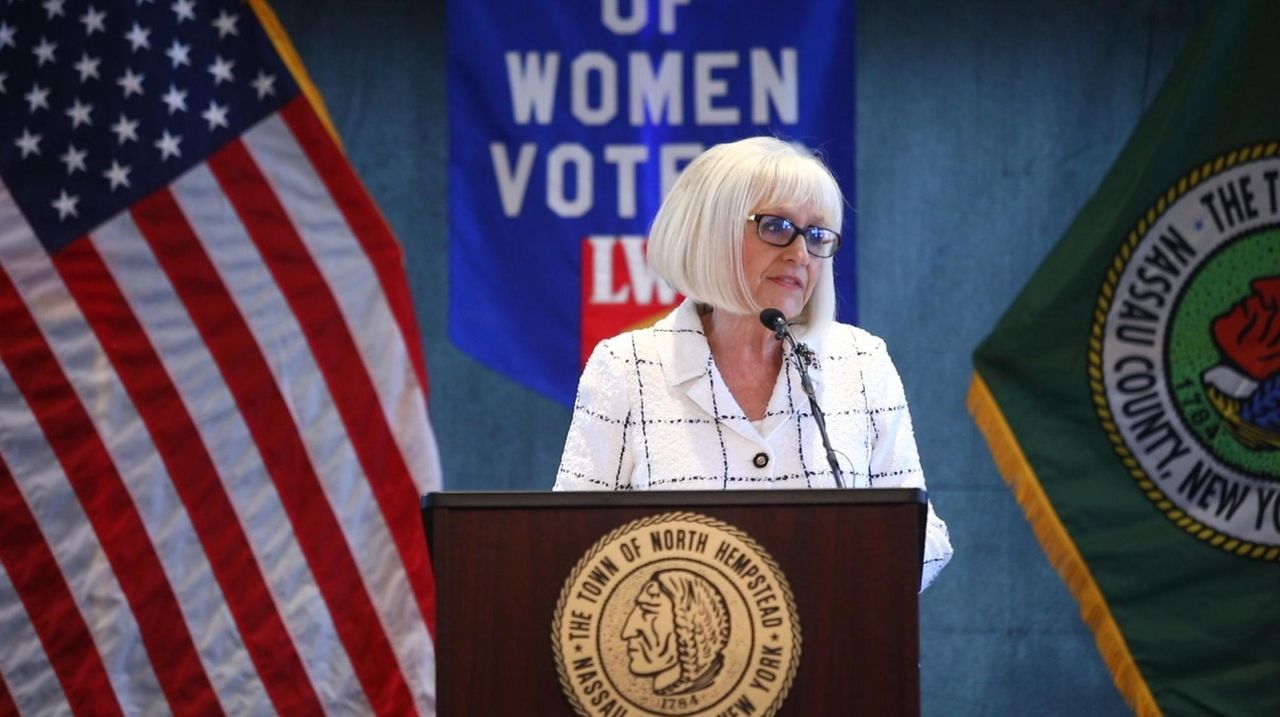 North Hempstead will request a study to examine the potential impact of a proposed floodgate, review a controversial wireless application and pursue legal actions against the Federal Aviation Administration, Town Supervisor Judi Bosworth said Friday during her seventh State of the Town address.

In an hourlong speech, Bosworth touted past achievements and addressed several challenges the town will face in 2020.

The supervisor reiterated her concern of a proposed mile-long floodgate near the Throgs Neck Bridge before a crowd of about 300 at the Harbor Links Golf Course in Port Washington.

“It was not OK for the North Shore of Long Island to be considered acceptable, collateral damage,” Bosworth said, noting she will request a study of potential impacts of the proposed floodgate when she meets with the U.S. Army Corps of Engineers in February.

Dolores Mangold and Madeline Maffetore, both of Mineola, said they appreciated Bosworth’s “proactive” approach on environmental issues like the proposed surge barrier, which many residents fear would cause induced flooding and worsen water quality.

“You have to think about the impact to us,” Mangold said. “They are attacking these issues before they are a problem.”

Army Corps officials have previously said that the plan was still in an early stage and measures would be taken to mitigate potential induced flooding.

Without mentioning the company’s name, the supervisor for the first time publicly addressed the lawsuit ExteNet brought against the town last week.

“Instead of listening and trying to address the concerns of the communities, they seem determined to sue their way into our backyards whether we like it or not,” Bosworth said.

The Illinois-based wireless company has sued three villages and the town over the installation of 110 small wireless facilities that company representatives said would improve wireless coverage and capacity.

“We shouldn’t have to endure that kind of bullying,” Bosworth said, inviting the residents to come to a public hearing on March 19. “We should have some say in where these installations can and cannot be placed.”

Bosworth also announced that the town and several villages would retain a law firm to help them sue the FAA because of air traffic noise and pollution from flights in and out of Kennedy and LaGuardia airports.

“We attempted to work with the FAA, but we believe that they have consistently kicked the can down the road or just ignored our requests entirely,” Bosworth said. “So, it's time to get their attention.”

Bosworth, the town’s second female supervisor who won a fourth term last November, didn’t fail to mention the 100th anniversary of the ratification of the 19th amendment, which gave women the right to vote.

“Well done, ladies,” Bosworth said at the luncheon hosted by the League of Women Voters of Port Washington-Manhasset. “I would not be here without your efforts.”