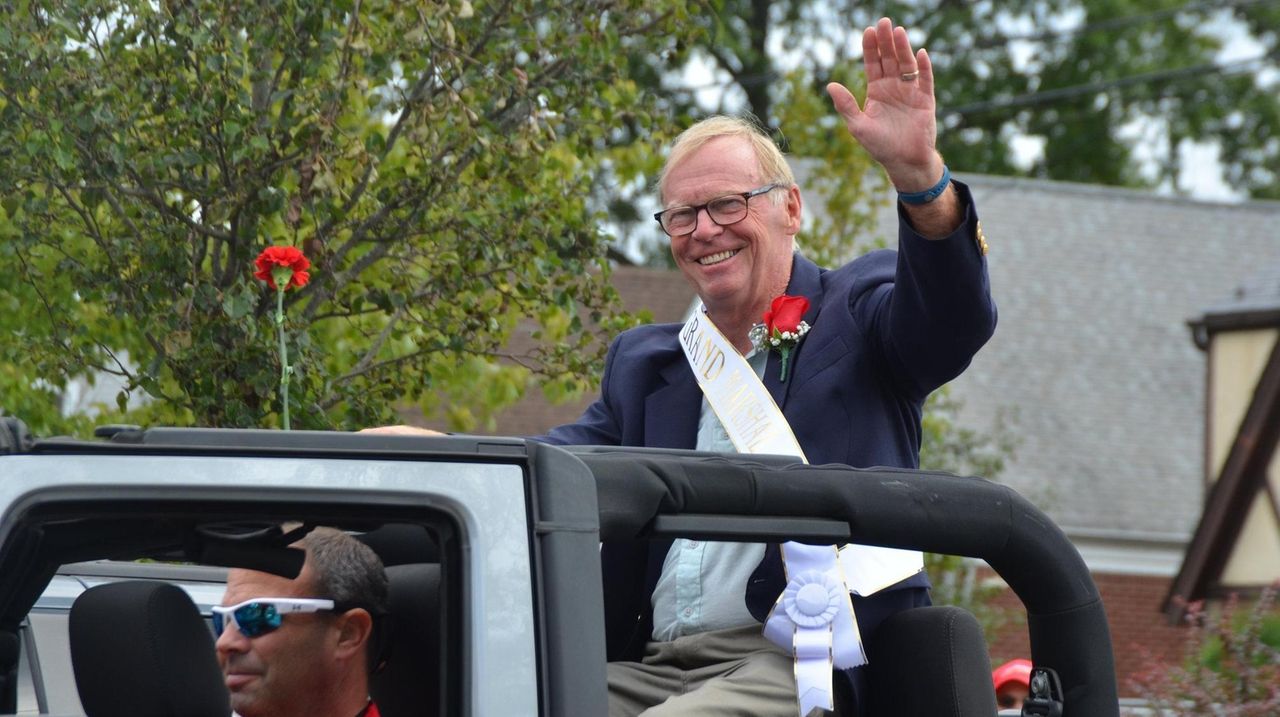 Ken Becker, who was Floral Park Memorial High School homecoming king in 1966, was the grand marshal of the 2019 homecoming parade, proving that his connection to the school as a teacher, coach and public address announcer hasn't wavered over the years. Credit: Newsday / Brittany Bernstein

Then he swapped his jacket and boutonniere for a polo shirt and shorts and settled into the press box, where he’s been “The Voice of the Knights” as the public address announcer for almost three decades.

One of his duties Saturday at halftime was announcing the homecoming court, and the king and queen. But it was hardly his first brush with homecoming royalty — or multitasking at the school he never really left.

As a senior at Floral Park in 1966, Becker was surprised to find that his peers elected him homecoming king. His experience featured a rainy parade with colorful floats, plus a homecoming dance in which he and queen Claire Mullen shared what he called a wedding-like first dance before his classmates joined them on the floor.

After earning a bachelor's degree in biology at the now-defunct College of Emporia in Kansas, Becker returned to Long Island and earned his master’s degree at what is now LIU Post. He also began working at his old school district: first as a teaching assistant, then as a substitute, and later as a full-time biology teacher at his alma mater. Becker, who played basketball and baseball and ran track while attending Floral Park, went on to coach the girls soccer and boys basketball teams, while also serving as an assistant coach for boys track.

“I liked the idea of teaching,” said Becker, who is now 71 and lives in Garden City. “Some of the teachers I had made me feel comfortable and I liked what they were doing, and I thought I'd pay it back.”

His colleagues and students rallied around him when he received a colon cancer diagnosis in 2000, visiting him while he recovered from surgery and supporting him when he returned to school. He taught classes in the morning, received chemotherapy in the afternoons, then rushed back to announce basketball games at night.

He retired in 2003 at age 55, but the bond between him and Floral Park stayed just as strong.

“This is basically my family and it’s just extended for eons. The building has had good memories,” he said, recalling championships won with the track and soccer teams or acting in plays performed by teachers at the school, including Fiddler on the Roof.

“He was so supportive of me when I first came here,” retired Floral Park social studies teacher Greg Mayerhofer said of Becker. “He is one of the kindest, most considerate people I’ve ever known. They don’t make much like him anymore.”

Becker told Mayerhofer he had been named grand marshal while they played a round of golf recently with other retired friends. But retired is a relative term. Many of Becker’s former colleagues joke that they see him more often now while he's announcing games and organizing track meets than they did when he was teaching.

The few times he has missed announcing games were because he was on vacation with his wife of 47 years, Jean, a retired Herricks High School biology teacher. People would approach him at the next game to make sure everything was OK.

“He’s so well received here by the community. The teachers, the kids, they all know Mr. Becker and he’s the best,” said athletic director Larry Doreson, noting that Becker was “the overwhelming favorite” for this year’s grand marshal nod.

He concluded, “We continually welcome him back here and hope he never leaves.”