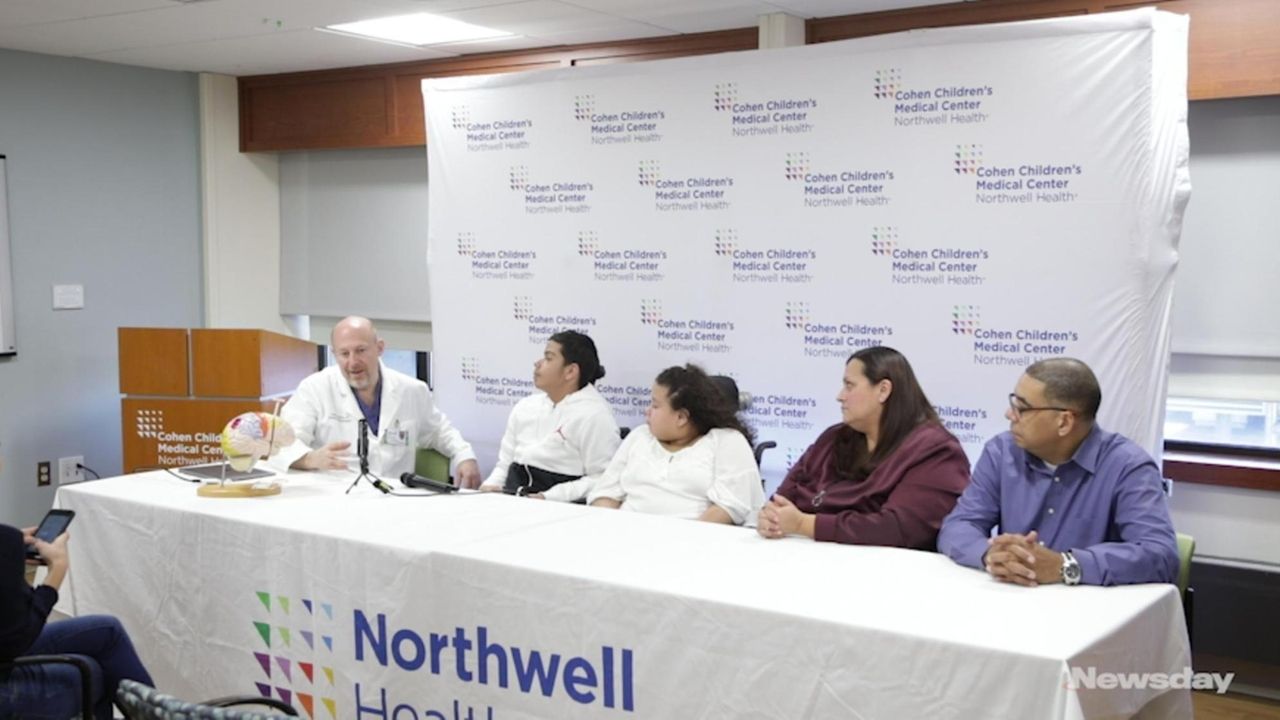 On Tuesday, Dr. Mark Mittler, a pediatric neurosurgeon at Cohen Children's Medical Center in New Hyde Park, explained how siblings Adryana and Paul Navarro, who were born with spina bifida, will have their first pain-free Christmas. Credit: Newsday / Yeong-Ung Yang

For years, there wasn’t a night the Navarro siblings didn’t worry that the thin tubes that snaked from their brains down into their abdomens would fail.

A blockage meant fluid would pool in their brains, causing them unbearable headaches, dizziness and if left untreated coma or death.

“Every night there was a fear of going to the emergency room,” said Paul Navarro, 15, of Hempstead.

But earlier this year, both Paul and his sister, Adryana Navarro, 8, received a life-altering procedure that should prevent any more abrupt trips to the hospital and give the family its first stress-free Christmas.

The Navarro siblings were both born with myelomeningocele, a severe form of spina bifida in which the spinal cord doesn’t fully close. Both developed hydrocephalus, a buildup of fluid in the brain, which doctors at Cohen Children’s Medical Center in New Hyde Park treated by placing shunts in their heads to divert the fluid.

Using shunts is the standard method for treating hydrocephalus, but they often become blocked, according to Dr. Mark Mittler, a pediatric neurosurgeon who has treated the siblings since they were born.

Paul Navarro has had 69 surgeries to repair his shunt, while Adryana has had 19.

“It’s just hard to struggle through this, because I’ve been in and out of the hospital a lot, especially during the night,” said Adryana, a third-grader at The Henry Viscardi School in Albertson, a school for children with physical disabilities.

The birth defect has caused them to develop club feet and weakness in their legs. But the hydrocephalus and the constant threat of shunt malfunctions has made life chaotic for the family, the siblings’ mother, Karen Navarro, 46, said.

“It was very hard to figure out what the best thing for them was,” she said.

In March, Paul Navarro and his family decided he would undergo a procedure that would let him live without a shunt. Mittler and his team used a camera to puncture a small hole in the bottom of the brain that would let the fluid drain naturally. They performed the same surgery on Adryana in August.

“Usually when I see them they’re in crisis; they’re vomiting or in a tremendous amount of pain,” Mittler said Tuesday at a news conference at Cohen Children’s Medical Center. “It’s so satisfying to see them healthy and happy.”

For the first time, Paul Navarro said he feels as if he’s not constantly on edge and is still pleasantly surprised each time he touches his neck and doesn’t feel the shunt running underneath his skin.

*Spina bifida is a congenital birth defect that occurs when the spine doesn't form properly.

Nearly 10 babies with spina bifida, which means "split spine," are born in the United States every day.

Scientists believe genetic and environmental factors act together to cause the defect.