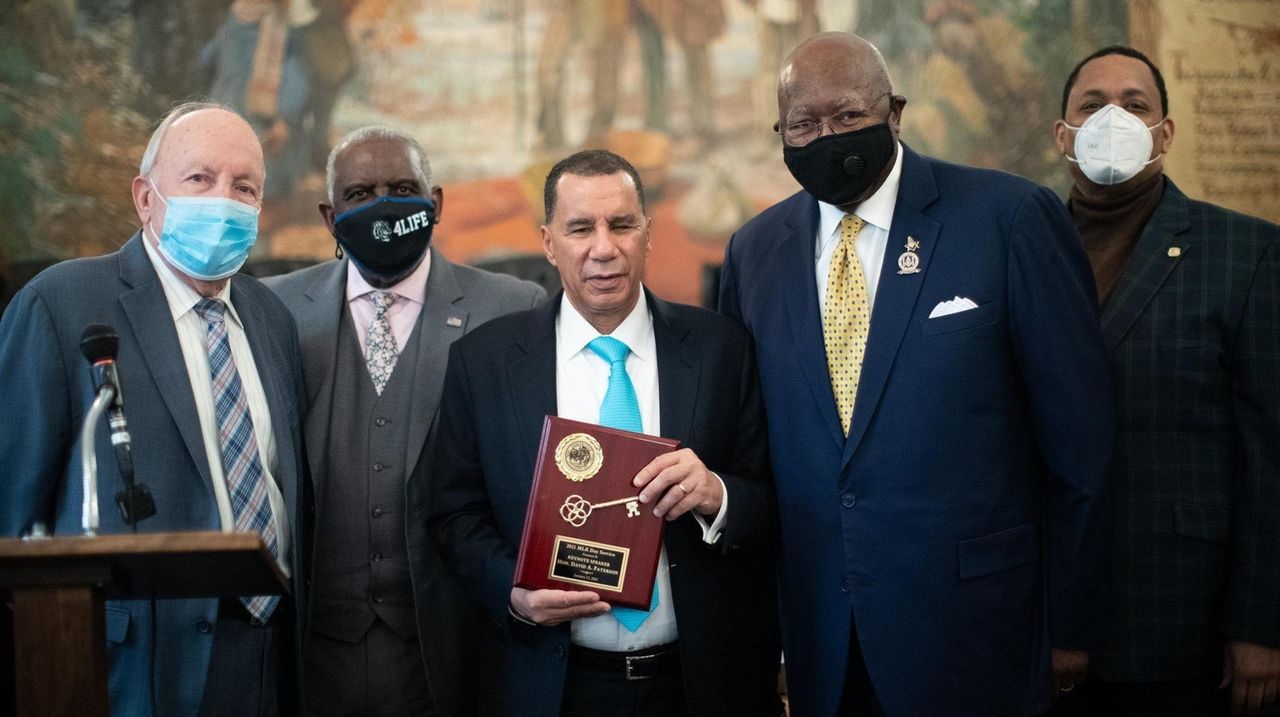 Former Gov. David Paterson spoke on the life of Dr. Martin Luther King Jr. on Sunday. Paterson returned to Hempstead, where he lived for 25 years and graduated from the public school system, to receive the village's highest honor as part of the celebration honoring Dr. King. Credit: Kendall Rodriguez

Former Gov. David Paterson returned home Sunday to Hempstead, where he lived for 25 years and graduated from the public school system, to receive the village's highest honor as part of a celebration honoring the life of the Rev. Martin Luther King Jr.

The state's 55th governor, and the only African-American to hold that office, Paterson was presented with the key to the village during a ceremony at Village Hall that also honored several local community leaders. The village has the largest Black population on Long Island.

Paterson, the son of influential Harlem political leader Basil Paterson, was born in Brooklyn but lived in Hempstead from 1958 to 1983. He recalled Sunday how the New York City public school system would not allow disabled individuals — Paterson is legally blind — to assimilate in regular classrooms.

"So my mother went to Westchester, Connecticut and New Jersey and finally went to Long Island and found that the Hempstead School District would allow me to be educated in the system with other students," Paterson said. "I moved here in 1958, had a wonderful time living here and miss the place all the time."

Paterson was among the first Black students to attend Fulton Elementary School, which was renamed after the former governor in 2013, after the district integrated in the early 1960s.

The school, he said, was a melting pot of races and cultures.

"We knew that the way we were educated was unique and different," said Paterson, who stayed close with many of his grade school classmates. "It was kind of an experiment and the friendships I retained from then will last forever."

Paterson graduated from Fulton in 1968 and Hempstead High School in 1971. He later earned an undergraduate degree from Columbia University and a law degree from Hofstra University.

A Democrat, Paterson was elected in 1985 to represent Harlem in the State Senate and became minority leader before being elected lieutenant governor in 2006. He took over as chief executive in 2008 after then-Gov. Eliot Spitzer resigned amid a sex scandal and served in that post until 2010.

His 30-month governorship included ethics probes and scandals that took down some of his top officials. But Paterson nonetheless managed to impose budget cuts, increase oversight for New York's authorities and create a new pension tier for incoming state workers.

With the nation preparing to honor King on Monday, Paterson said the civil right icon's message of peace, inclusion, and justice resonates even more during a time of intense division in the country, particularly in the wake of the Jan. 6 siege at the U.S. Capitol by insurrectionists.

"We face some of the same struggles that Dr. King did but we are absent his type of dynamic, articulate, perceptive, courageous and outspoken way," Paterson said. "But right here in this room we have the leadership capacity to make his dream a reality."

While the country has made tremendous progress, and is preparing to inaugurate its first Black female vice president on Wednesday, it must still come to term with its errors — from its treatment of Native Americans to centuries of slavery and institutional racism — if it wants to move forward into the future, Paterson said.

"The only we way we are going to live the American dream is if we have that moment of penance when we as a nation recognize not only the great things we've done right but all the things we've done wrong," he said.

Cuomo: NY pushing toward reopening, agreeing to limit COVID-19 powers
Alzheimer's Association hosting free virtual seminar on legal, financial planning
2:29 Looking back one year, 'I see that I am one of the lucky ones'
Third COVID-19 vaccine arriving in NY as soon as today
Wantagh High closed after new virus cases surface
Suffolk lawmakers approve new aquaculture leases, rules
Didn’t find what you were looking for?