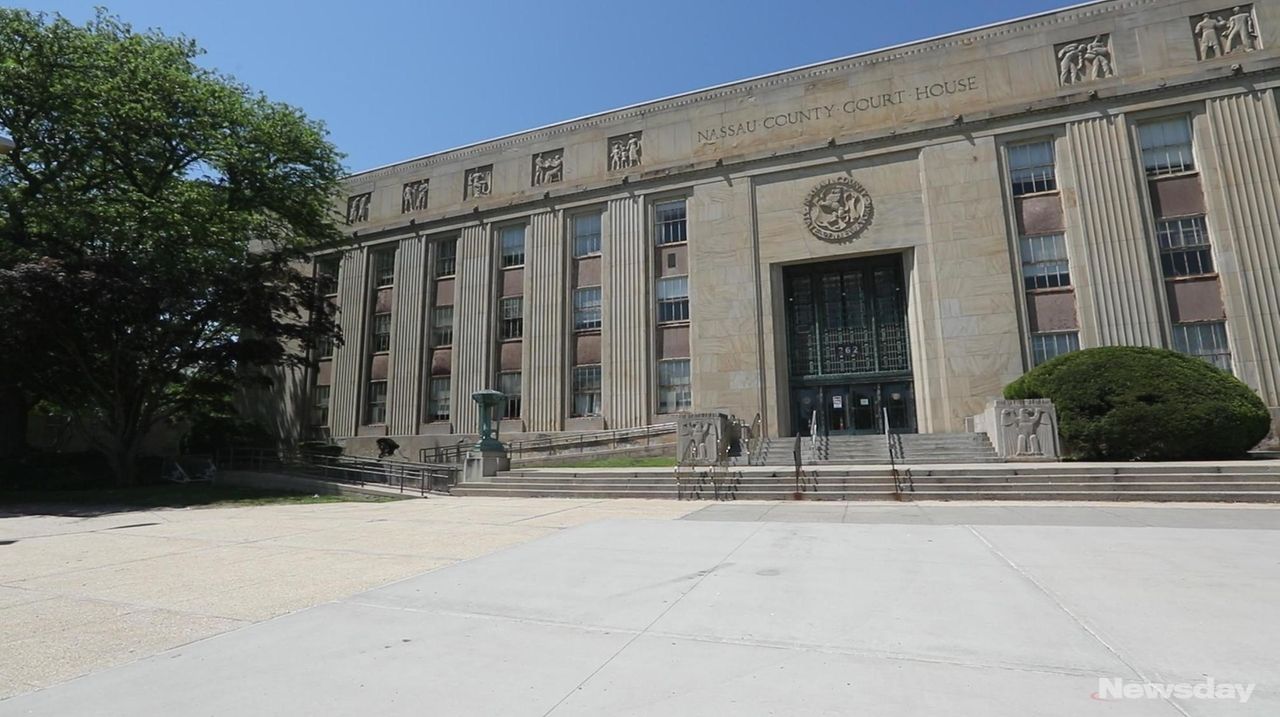 The Nassau County Court Building on Old Country Road in Mineola was built in 1938 with limestone walls. On May 24, 2018, Daniel Looney, a Nassau County deputy executive assistant district attorney, spoke about an interesting find: brachiopod and bryozoan fossils in the walls. Looney said he contacted a paleontologist who said they were likely in excess of 200 million years old. Looney is part of the team looking to obtain landmark status for the courthouse and he said he hopes this will help in his efforts. Credit: Randee Daddona

For more than 20 years, attorney Daniel Looney has been on the trail of a case dating to the 1930s.

The heart of his latest endeavor revolves not around a human client but a walled structure where Looney works day in and day out: the Nassau County Courthouse in Mineola.

The deputy executive assistant district attorney, a preservationist by avocation, is leading an effort to get the courthouse on Old Country Road listed in the National Register of Historic Places.

To receive the designation, structures must possess distinctive architectural characteristics, have a connection with historical figures or provide a significant contribution to the nation’s history.

“As part of the application, we need to establish its architectural significance, how it connects with the community as a hub of legal activities, et cetera,” said Looney.

The designation would help tap grants from the state and from nonprofit organizations for badly needed repairs, he said. The crumbling limestone walls have been braced with makeshift wooden awnings and hold their own historical intrigue: brachiopod and bryozoan fossils.

Looney said he took pictures of seashells in the limestone walls and sent them to a paleontologist at a natural history museum. He said he was told the creatures pre-existed land animals or fish and that they are probably in excess of 200 million years old.

According to the National Park Service, brachiopods have two shells, or valves, first appeared in oceans more than 570 million years ago and are among the most abundant marine fossils. Bryozoans are tiny colonial organisms that are often mistaken for corals. An individual bryozoan is usually less than 1 millimeter in size, according to researchers at Cedarville University in Ohio who collected dozens of fossils in their area for more than 30 years.

The Mineola courthouse complex was planned by the federal Public Works Administration as a Depression-era infrastructure project on the former Queens County fairgrounds, when Nassau was part of Queens (until 1899). It opened in 1940 as the Nassau County Civic Center to replace the previous courthouse.

With blueprints for the Art Deco-style edifice lost in flames and in clerical missteps, Looney plodded for a long time on a cold trail — until he scoured old New York City newspapers and unearthed coverage of the connection between the courthouse and the Lincoln Memorial in Washington, D.C.

It turns out the courthouse’s architect, Lawrence Lincoln, worked for many years with Henry Bacon, the man who designed the Lincoln Memorial. No wonder that the courthouse’s tall columns and sunlit rotunda mirror the memorial’s design. And the tripod entrance of the courthouse is a miniature of its cousin in Washington.

“It’s fascinating that we have a version of the Lincoln Memorial here,” said District Attorney Madeline Singas.

Singas said the push to seek designation is supported by Nassau officials, including County Executive Laura Curran. No landmark status would be bestowed without approval from the owner, which in this case is the county.

Looney, who moved to Long Island from the Bronx 30 years ago, has been active with the nonprofit Preservation Long Island to restore public buildings. His past efforts include the Farmingdale Long Island Rail Road station and St. Kilian Roman Catholic Church in Farmingdale.

To drum up interest in the courthouse’s historical significance, Looney said, he plans to give more public tours. During a tour last fall, he was alerted by a court officer to the marine fossils embedded in the walls.

Among those who have traveled from afar to tour was Jennifer Betsworth, preservations specialist from the state Office of Parks, Recreation and Historic Preservation in Troy. Looney has been working with Betsworth to put together his submission to the state by early next year.

“A lot of work has to be done,” Betsworth said. The courthouse “is a great building clearly eligible for the National Register.”