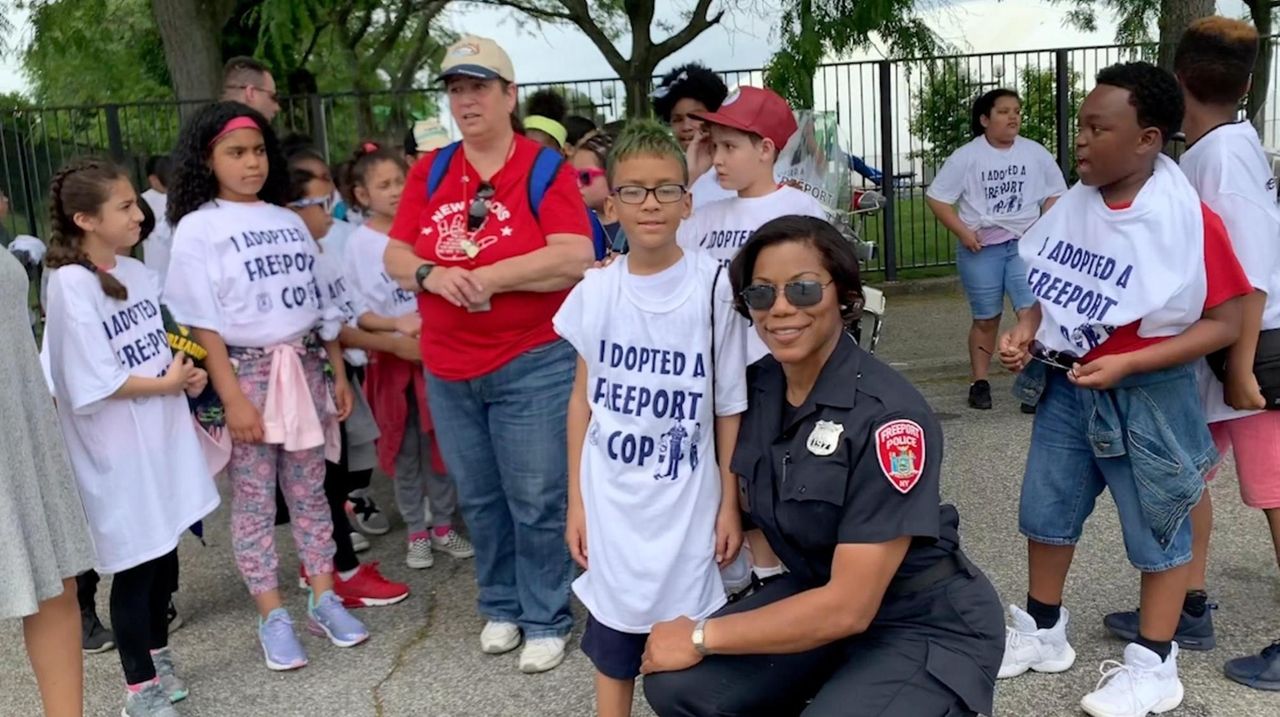 Freeport Village police officers met with hundreds of fourth-graders to celebrate the conclusion of the annual Adopt-A-Cop program. At the Freeport Recreation Center on Friday, students got to interact with different units of patrol officers, including horse mounted officers, marine patrol officers and the K-9 Units.  Credit: Howard Schnapp

It looked like a playground from a child's dream — a helicopter landed and took off, horses and dogs waited patiently for a hug, and kids hopped on a big motorcycle and pretended to drive.

And, of course, there was pizza.

The Freeport Police Department created that scene in the parking lot of the Freeport Recreation Center Friday, and then invited some 500 kids from across the village. The event capped another year of Freeport's Adopt-a-Cop program, in which officers speak in classrooms, join in class field trips and, in general, create good relationships with young people.

Freeport has been doing the program for more than 20 years, long enough for some students to grow up and join the police force. Boris Herrera-Barillas was a fourth-grader in Miss Lulay's class in New Visions Elementary School about 18 years ago when police officers visited the class and talked to kids.

He liked the way the officers talked about avoiding violence and gangs, and he could see they really cared about the kids' safety.

"It gave me direction," said Herrera-Barillas, 27 and a Freeport officer for the past four years. "I still have my [Adopt-a-Cop] T-shirt. I'm sure if I put it on, it would fall apart."

On Friday, amid the swirl of activity around the sprawling parking lot, Herrera-Barillas ran into his former teacher.

"Look at him," said a joyful Donna Lulay, peering up at her former student, looking sharp in his police uniform. "I'm so proud of him."

Freeport Police Chief Miguel Bermudez said the program is aimed at exposing young people to police in a friendly way, not when trouble arises or when they are in trouble.

"We want to show the human side of police officers," Bermudez said. "It can help a child open up about things that are troubling them. If a kid is being picked on, this is a way to bring that to light."

The program focuses on fourth-graders, believing that the age of 9 or 10 is an appropriate time to build these bridges. The kids are old enough to understand, but most have not yet  encountered the pressures of joining in gang activity and other detrimental behaviors.

"It's just nice to remove that stigma and artificial barrier" between police and the public, he said.

Thursday was the perfect day to trade a classroom for some outdoor fun. There wasn't a hint of rain and temperatures made the summer vacation seem even closer.

Zuroni Beckett, 9, said the police program has taught her a lot about the police, that, "they're not just arresting people, they're helping people."

When she walked up to the police motorcycle, Sgt. Andrew Berg hoisted her up into the saddle and she gripped the handle bars as if ready to gun the engine. She got a kick out of seeing which button turned on the lights and siren.

Her mother, Tiffany Beckett, said she believes her daughter would now be more comfortable approaching an officer if something scary happened.

Anthony Molina, 10, thought it was pretty cool to put on a  bulletproof police vest.

"Is that heavy?" the officer asked.

He also enjoyed seeing the inside of a police ambulance and the helicopter.

These get-togethers also benefit the officers, said Officer Alan Kessler,  who has volunteered with the program for years.