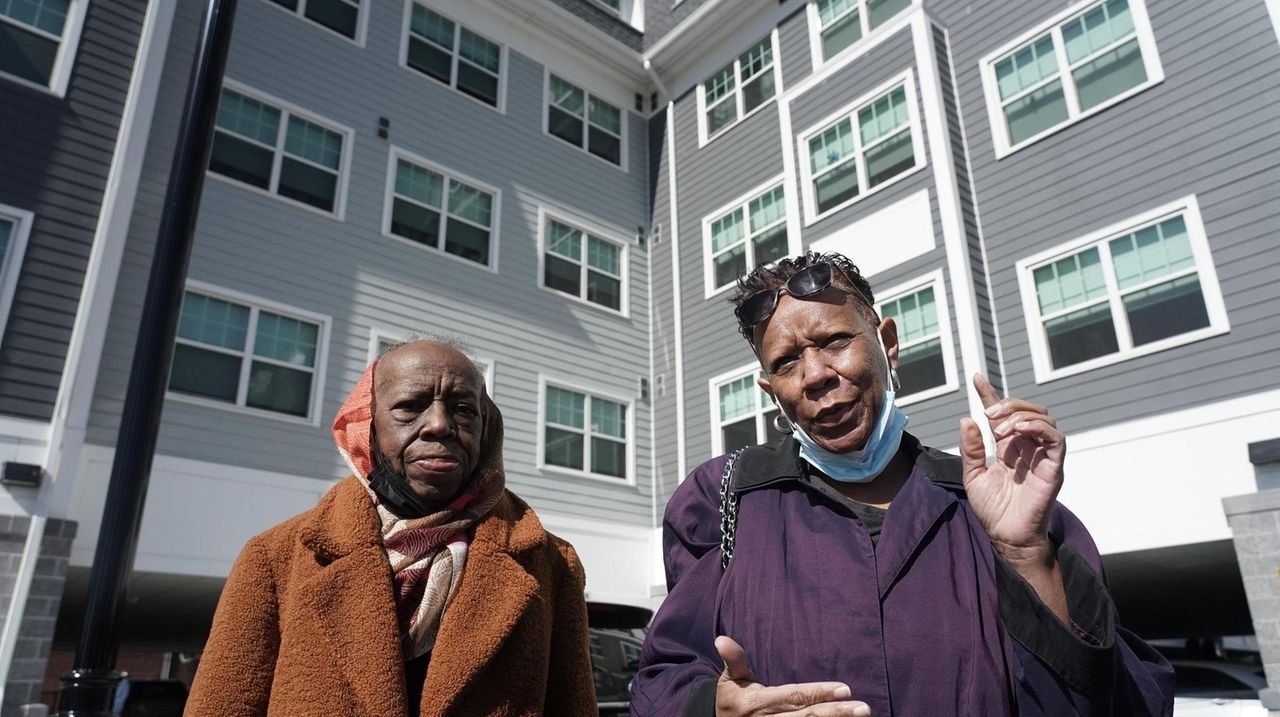 Construction of the $65 million complex, informally dubbed the "New Moxey Rigby," was completed in December 2019, but village officials said it took roughly a year to move residents from the old housing complex into the new one, located on the west side of Buffalo Avenue, just north of Merrick Road.

The old complex, which opened in 1958 and had about 400 residents, has been decommissioned and will be demolished, said Freeport Mayor Robert T. Kennedy.

"The original Moxey Rigby was under flood conditions," Kennedy said after a news conference at the new complex. "It was damaged by Superstorm Sandy. The cost to rehabilitate was just tremendous." Of the new complex, which is near the old one, he said, "we upgraded and raised the apartments 12 feet above ground and built the height of the parking lot up. It's now floodproofed for 100 years."

The new complex is built on pilings, with its buildings and 101 parking spots — the old facility had 12 spots — perched above the flood-elevation base. The project was funded with a combination of federal and state grants, housing tax credits and private-sector dollars, officials said.

The development features new amenities including two laundry rooms on each floor; a pair of community centers, two elevators, air conditioning in each apartment, new appliances in each apartment, and an outdoor playground and basketball court. Apartments are about 25% larger than the previous ones, officials said.

Sandy severely damaged the old facility, causing flooding in boiler rooms, laundry facilities and other areas, leaving much of its infrastructure — already outmoded — beyond repair. The October 2012 storm forced dozens of families, who were without electricity and gas for several weeks, from their homes. About a dozen parked cars were destroyed.

"This building is so far and away such an improvement for the village," said Robert Pascucci, president of Jobco, the Great Neck firm that built the facility.

The complex will maintain the name of Moxey Rigby, who was born in the Turks and Caicos islands and raised in Freeport. Rigby was elected as a judge to the Nassau District Court in 1959, becoming the first African American to hold elected office in the county. Rigby, who helped create the Freeport Housing Authority, died in 1962 at the age of 68.

"The family is honored that his name is being kept alive," said John Williams of Freeport, Rigby's cousin, who manages security for Freeport Housing Authority buildings. "There's a bunch of people who say 'never forget.' And we understand as African Americans that we can never forget. The renaming, and keeping his name alive, will help us never forget."

Myriam Rigby-Butler, Moxey Rigby's granddaughter, who lived in the old complex for 20 years, said the upgrades are obvious.

Delores Rigby, Moxey Rigby's daughter-in-law, who lives in one of the new apartments, said it's "very comfortable and a great place to live. It's a beautiful place. Everything about it is lovely."