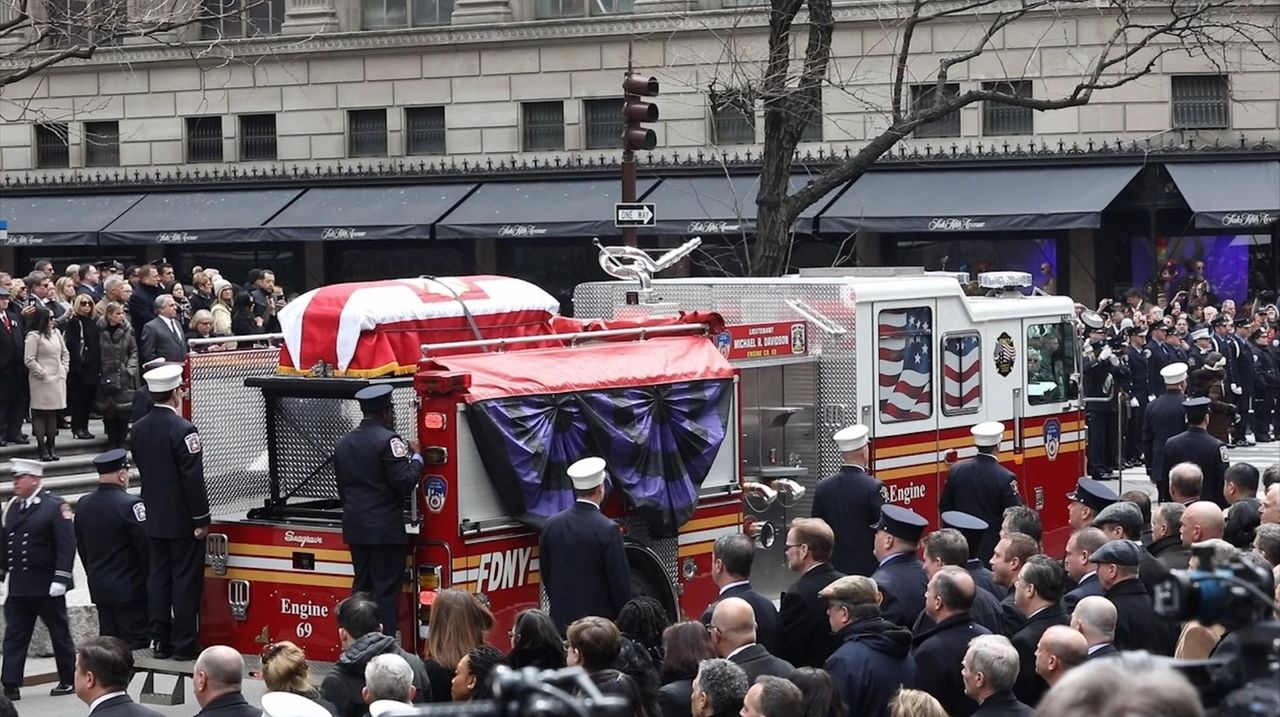 Thousands of firefighters in their dress uniforms gathered outside St. Patrick's Cathedral in Manhattan on Tuesday for the funeral for firefighter Lt. Michael Davidson, who died last week as he fought a blaze on a movie set in Harlem. Credit: Newsday

The funeral Tuesday for fallen firefighter Lt. Michael Davidson revealed the big, broken heart of New York. But it was his firefighter brother’s eulogy that showed the depth of the pain for those he loved the most.

Eric Davidson recalled that his older brother had picked the name Eric for him before he was born. He said he admired his brother so much that even now, upon his death, he looked to him for guidance.

“The past three days I kept saying to myself, what would Michael do?” Davidson said to the pews of mourners at St. Patrick’s Cathedral in Manhattan.

So much of Michael Davidson’s life was dedicated to the New York City Fire Department, but his greatest commitment was to his parents, wife, four young children and other family, Eric Davidson said.

In every decision, “he was looking to make a better life for his family,” his younger brother said.

Michael Davidson, 37, from a firefighter family, died last week after he fought a blaze in a Harlem building being used for a movie set. He is survived by his wife, Eileen, three daughters, ages 7, 3 and 1, and a son, age 6.

First, he was posthumously promoted to lieutenant.

Then New York honored him with a huge funeral filled with thousands of fellow firefighters in their dress uniforms, and top city and FDNY officials.

Mourners said Davidson’s death was a powerful reminder to New Yorkers of the sacrifices firefighters make for them every day.The ceremony, filled with pomp and tradition, shut down Fifth Avenue in front of St. Patrick’s and transformed that stretch from a street of roaring commerce to a solemn place of honor and loss. The solemnity of the day was heightened because it arrived during Holy Week, before Easter.

Davidson had the “DNA of the FDNY” in his blood, Cardinal Timothy Dolan said in his homily.

“Never did I meet this hero, but now — now I along with this entire teeming metropolis feel that I know him very, very well,” Dolan said.

He added, “Jesus and Michael have quite a bit in common.” Jesus laid down his life, “so did Lieutenant Davidson.”

Mayor Bill de Blasio, speaking at the morning funeral Mass, praised Davidson as “a hero of the highest order.”

Davidson was the cornerstone of his hometown of Floral Park and of his FDNY company — “a firefighter’s firefighter” who was the “embodiment of the term ‘the bravest,’ ” the mayor said.

Fire Commissioner Daniel Nigro noted that “every firefighter wants the nozzle” and Davidson, for one, was “a natural-born nozzle man.” He was the firefighter closest to the fire, the front line of the front lines, willing — as had happened to Davidson before — to burn his hands fighting the blaze, Nigro said.

Civilians were there as well to pay their respects.

Calvin Hunt, 56, of Harlem, came with his 10-year-old son, Cameron. He held a photo of Davidson and wore an FDNY hat. His young son wore an NYPD hat and a sign: “God bless the bravest.”

“It’s like family at the end of the day,” he said.

Deborah Wurtsbaugh, 52, was visiting the city for a long weekend from St. Louis.

“I’m pretty overwhelmed; there’s nothing like this that would go on in St. Louis,” Wurtsbaugh said. “Just to see all the New York support, it’s fantastic to see.”

Davidson, a 15-year veteran of the FDNY, died from smoke inhalation after responding to a fire Thursday night at the former home of St. Nick’s Pub, a jazz club that closed in 2011.

The cause is under investigation.

He was the son of retired firefighter Robert Davidson, who served for 26 years, primarily at Engine 69 in Harlem — the same as his oldest son. Eric Davidson, an 11-year veteran, works at Engine Company 88 in the Bronx.

In her eulogy, Davidson’s cousin Lauren Cote praised him as a silent type of person but someone you could talk to about anything.

Eric Davidson did not want people forgetting his brother’s lighter side. He said he’s been thinking that he’ll never be able to share a Jets or Mets championship with his brother, but then added, “We could live 100 years and never see that.”

He recalled how his brother would say when they were younger that he would never marry and have kids. But then he met the love of his life, his future wife.

Eric Davidson spoke directly to her, stressing, “I’m in awe of the strength you’ve shown over the past few days. I love you.”

The crowd gave him — both brothers, really — a standing ovation.

Outside the cathedral, as is tradition, Eileen Davidson was handed an Engine Company 69 lieutenant’s helmet as she held one of their daughters.

A firetruck draped with purple and black bunting then took her husband to Green-Wood Cemetery in Brooklyn, where cremation was to take place.

Not long after, the mourners filed out of St. Patrick’s, church staff picked up the funeral programs left behind on the pews. Some firefighters who had been among the masses outside the church came to get a copy of their own.

The back page featured a photo of Davidson, his wife and four children above the “Firefighter’s Prayer.”

“I want to fill my calling, to give the best in me, to guard my every neighbor, and protect their property,” the prayer reads in part. “And if according to Your will, I must answer death’s call, bless with your protecting hand, my family one and all.”

Hundreds attend wake of FDNY firefighter from LIHundreds of FDNY firefighters waited on a line that snaked more than 50 yards to pay their respects to Michael Davidson, who died while battling a fire. A rough stretch for the ranks of the FDNYFirefighter Michael R. Davidson of Floral Park became the third member of the department's current ranks to die in 2018. Fallen firefighter from LI has family ties to FDNYMichael Davidson recalled as a "good family man" who worked in the same firehouse as his father and whose firefighter brother works out of the Bronx.

Atlantic Beach thrives on a sense of community
1:04
10 years ago, they were valedictorians. Where are they now?
1:10
COVID-19 rate falls as eateries, bars ready to extend last calls
1:34
Teens lead Manhasset rally condemning anti-Asian violence
Long Island parents differ on COVID-19 vaccine
2:27
Pandemic opened courts to virtual operations, but challenges persist
Didn’t find what you were looking for?