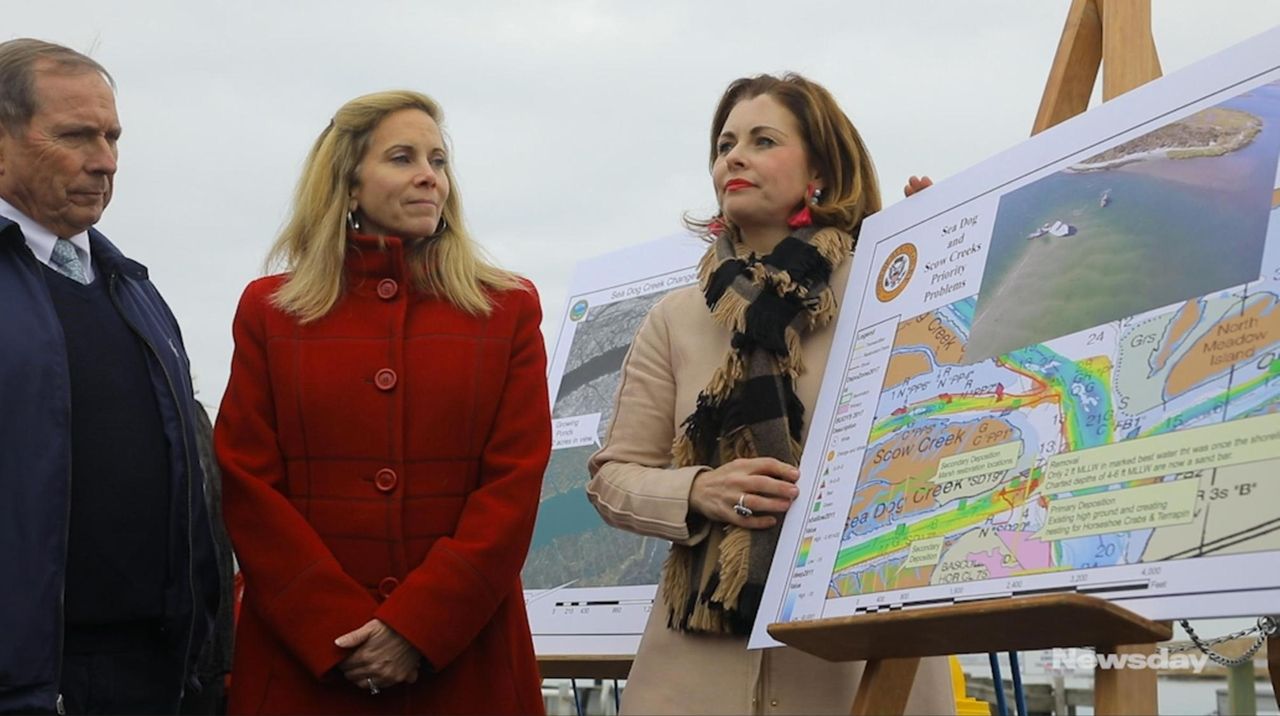 As she finishes up her term as Hempstead town supervisor, Laura Gillen on Dec. 17 reflected on the progress she made while in office. Credit: Jeff Bachner

Laura Gillen’s first and only term as Hempstead Town supervisor was marked by what she said was a battle to root out corruption, but many of her initiatives fell short, stymied by a Republican board determined to take back the seat in 2020.

Supervisor-elect Don Clavin will take office Jan. 1, returning Republican control to the seat after Gillen became the first Democrat elected in more than a century.

“It’s disappointing,” Gillen said. “I felt we brought forward some great government initiatives, and they’ve been stymied by the town board. It’s disappointing the work we started here cannot go forward.”

She lost by a narrow margin to Clavin, in a sweep of the board, returning six of the seven seats to the GOP. Clavin has been the town’s receiver of taxes for 18 years.

“I am grateful to the voters of the Town of Hempstead for giving me the opportunity to serve them as their next town supervisor,” Clavin said last week in a statement. “I have given sincere efforts to ensure a smooth and orderly transition of power, which demonstrates the highest level of respect for the supervisor. At the same time, I wish to thank Supervisor Laura Gillen for her service in government, and I wish her well in her future endeavors.”

Gillen touted her accomplishments in office, including improving transparency in town contracts; modernizing Town Hall by replacing a portion of 72 typewriters in the clerk's office with computers; increasing competitive bids on professional services, such as town contracts; and dedicating $59 million to road repairs. Gillen called herself the only fiscal conservative supervisor in nearly 15 years.

“I heard residents loud and clear,” she said. “We have seen a government prior to me getting here that raised taxes $99 million during the tenure of [former supervisor] Kate Murray, Don Clavin and [former supervisor] Anthony Santino. Where did that money go? It was not invested in our roads and not invested in our residents. I was trying to change that.”

Gillen also called on the state comptroller’s office to do a complete financial audit of the town and sought state intervention to review practices at Hempstead's building department, after thousands of homeowners were given notices of additional Sandy repairs, five years after the 2012 storm. She said she also reported improprieties to the U.S. Attorney’s office and Nassau district attorney’s office regarding unpaid contracts at the Malibu Beach Club in Lido Beach and alleged corruption in the building department.

Her tenure was also marked with many 6-1 votes, where the Republican board aligned with Democratic Senior Councilwoman Dorothy Goosby against several of Gillen’s initiatives, including tabling a vote on software to make town agendas more accessible and blocking ethics reforms to reveal nepotism in town departments where relatives with different last names worked.

Goosby voted with Gillen in support of special elections to fill board vacancies, but the town majority cited the $100,000 cost per race as too expensive in lieu of appointing board seats.

Among the most divisive moments in her tenure was a lawsuit Gillen brought against the six board members 100 days into her term in 2018, which led to a judge’s split decision invalidating a no-layoff clause, but maintaining 192 promotions, transfers and hires approved before Gillen took office that she said led to an additional $2 million in unbudgeted costs.

During the campaign, Clavin and fellow Republicans criticized Gillen for her vote against an amended budget with a 3.5 percent tax cut. Gillen said her vote was misconstrued because she was voting against a budget projection of retirement savings that didn’t account for separation pay.

“Laura Gillen’s claim that she was the ‘only fiscal conservative’ in town government is laughable at best,” Councilman Anthony D’Esposito said. “Her first fiscal acts as supervisor were to present a $2 million tax hike and then vote no on a tax cut budget. And then the supervisor used her office to settle personal scores and partisan vendettas. Instead of compromising with colleagues, she personally sued her fellow town board members.”

Gillen was largely unapologetic about her term and struggled to name anything she would do differently in her time in office or reelection bid. She said the Town Board has continued to add costs by approving $500,000 in unbudgeted transfers and hires of Clavin and Republican staffers.

“I didn’t lose the election based on my record,” Gillen said. “The Republican Party unprecedentedly spent more money against me. I’m gravely concerned about the town going back to the status quo. Don Clavin is the ultimate insider and has been part of the Republican machine his whole life.”

Gillen outraised Clavin with a $1.4 million war chest, but says she was outspent by the various local Republican committees. She outspent Clavin head to head by $1.2 million to $967,000, according to campaign finance records.

“The voters made their choice for the Town of Hempstead Supervisor in this year’s elections,” Nassau Republican Party spokesman Mike Deery said. “Don Clavin’s record of helping homeowners to lower their tax burden through tax-reducing programs, as well as his commitment to slashing Supervisor Gillen’s patronage staff budget, resonated with the public.”

Gillen has not ruled out another bid in politics but said she will take time in the new year to be with her family and consider various job options, including private practice as an attorney.

“I feel passionate that we’ve changed things in the Town of Hempstead,” Gillen said. “Even though I’ve lost this election, they can’t take this seat for granted anymore and I'm hoping this will cause them to behave a little better because they know someone’s watching. They thought they could get away with anything because a Democrat had never been elected or waged a serious campaign for this seat before.”