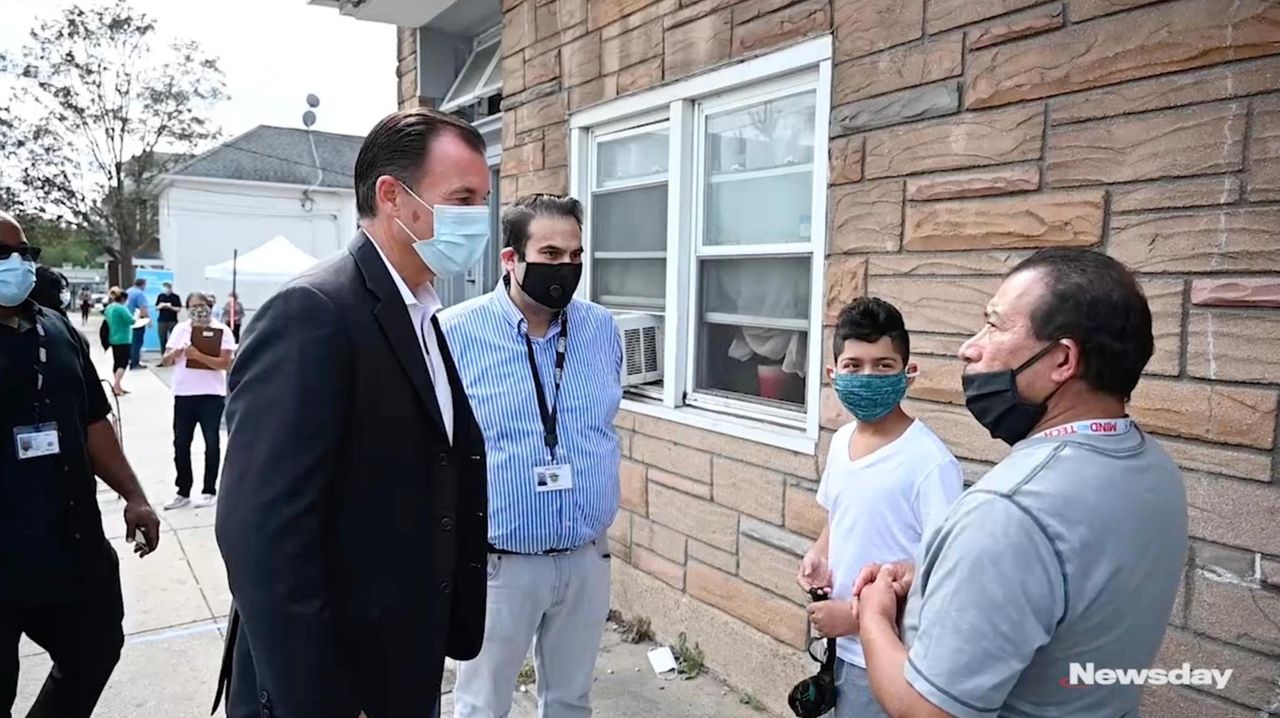 Siriaca Fernandez, 67, completed the census several months ago for her and her partner. But, the Glen Cove woman said, "I forgot to put my nephew on," even though the 22-year-old lives with them.

She got another chance Saturday during a census drive in four Glen Cove neighborhoods with low response rates.

The drive, which featured Rep. Tom Suozzi (D-Glen Cove) riding a firetruck and urging people through a loudspeaker to participate, was aimed at boosting the city’s numbers in what was supposed to be the last few days of the count.

The Trump administration had pushed to end the tally on Sept. 30, but on Thursday, a federal judge ordered the count to continue through the end of October.

Glen Cove Mayor Timothy Tenke said an accurate tally is critical, because federal funding is based in part on population.

"This census helps us acquire funding for our schools, our hospitals, the library – all our programs," he said as he stood in the parking lot where Fernandez had added her nephew's information. "If we’re not counted, we get a much reduced proportion of funding that we’re entitled to."

Glen Cove had a significantly lower self-response rate than the rest of Nassau County and the Town of Oyster Bay, which the city borders.

People of color, immigrants and low-income residents typically have among the lowest response rates. Glen Cove has a much higher proportion of foreign-born and Latino residents, and a much higher poverty rate, than the county as a whole, according to Census data.

The Trump administration tried to stop the counting of immigrants who are in the country illegally, but on Sept. 10, a federal court panel ordered that they be included as in past censuses.

Tenke said unauthorized immigrants "still live here, and they still need to be counted. Our funding is based on how many people live here, whether legally or illegally."

Some Glen Cove residents, like Charles Wheeler, 58, apparently had fallen through the cracks during earlier census pushes. Wheeler said he lives in a rooming house but also spends many nights in his sister’s apartment, which is his mailing address. He said he never received census material addressed to him.

His sister, Mildred Wheeler, 54, said she filled out the census form over the phone a few months ago but didn’t mention her brother because "I’m the only one on the lease here. That’s why I said ‘just me.’ "

A few weeks ago, a U.S. Census Bureau employee left census instructions with the 13-year-old son of Denia Flores and husband Edgar Flores, both 36. But, Denia Flores said in Spanish, "I couldn’t understand what it was" because it was in English. On Saturday, they made sure they and their two sons were counted.

"I know this helps the community," Edgar Flores said.