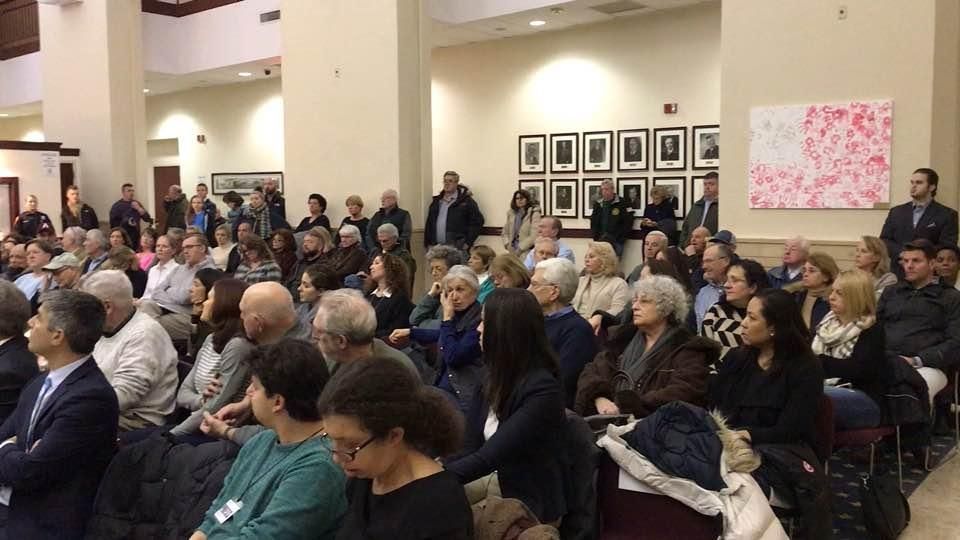 The Glen Cove City Council held a four-hour public hearing Wednesday night on a plan for a residence for people with eating disorders. (Credit: Newsday/David Olson)

Women who have been devastated by eating disorders implored the Glen Cove City Council Wednesday night to approve a residence for people with the illness, while some neighbors said such a facility would destroy the character of the upscale neighborhood.

The council took no action after the four-hour public hearing, but an attorney for the California company applying for the residence — Malibu-based Monte Nido & Affiliates — said that under state law the council could not legally block the plan.

There are 14 adult residential beds for people with eating disorders in New York State, at the Monte Nido residence in Irvington in Westchester County, said Jennifer Gallagher, Monte Nido’s chief development officer. The application is to house 14 people in the Glen Cove home that Monte Nido is under contract to buy.

Sondra Kronberg, executive director of the Jericho-based Eating Disorder Treatment Collaborative, said there are nearly 100,000 people on Long Island with eating disorders and a desperate need for a residential facility, because some people cannot get better in outpatient settings. She said she has sent clients to California and Florida for treatment.

“These are disrupting disorders of the mind that people are not choosing,” she said of the affliction, which includes such disorders as anorexia nervosa and bulimia.

Some in the crowd of more than 100 heckled Kronberg and other eating-disorder experts, telling them “you’re not a resident of Glen Cove” and “go home.”

Residents said the three-story Colonial-style, 6,000-square-foot brick house on 1.26 acres across from the Nassau Country Club is an inappropriate location, especially with Monte Nido planning to add 10 to 12 parking spaces.

“The choice of a residential area is so unnecessary,” said Anne Robbins, a retired physician who lives down the street from the house. “It is confrontational.”

She urged Monte Nido to find another location.

Frank Ferrante, who also lives near the site, pointed to the many historic homes in the neighborhood. An eating-disorder facility “would disrupt the character of the neighborhood,” he said. Others residents said traffic would noticeably increase — an expert hired by Monte Nido said it wouldn’t — and that the residence may reduce property values, an assertion the company said is refuted by studies on neighborhoods with other group homes.

Michael Sciara, a Jericho architect hired by Monte Nido, said passers-by would not be able to tell that the site is home to an eating-disorder treatment facility, because there will be no sign and no exterior changes to the house, and the parking spaces would be well-shielded by vegetation.

For Jennifer Converse, 25, the debate over the residence is about lifesaving treatment. The Locust Valley woman said she had four years of outpatient treatment for anorexia, and a residential setting would have reduced the time of her suffering.

“I am truly shocked by this community, to see the way you’re treating this illness, like it’s some disgusting thing,” she said, after which some residents shouted “no” and “we’re not saying that.”

Samantha Farber, 24, of Woodmere, said she checked into Monte Nido’s Irvington residence in July, after outpatient treatment for anorexia and orthorexia nervosa was not successful. Anorexia is a disorder that makes people lose more weight than is healthy, and orthorexia is an obsession with healthy eating. Farber stayed in Irvington for three months and said she is now in recovery.

“Had Irvington told Monte Nido when they went to their hearing that they were not going to have that house, I would not be able to be standing here,” she said. “I would literally probably be in the funeral home” that is near the proposed Glen Cove site.

Several residents challenged the statement by Kathleen Deegan Dickson, an attorney for the company, that the proposed residence is covered under the 1978 state “Padavan law,” which is designed to limit a municipality’s ability to bar some types of group homes.

The city can try to block the plan, but Monte Nido could appeal to the state, she said.

Deegan Dickson said for-profit companies are not excluded from the Padavan law.

The state Office of Mental Health approved two other Monte Nido residences, the one in Irvington and another for adolescents, as Padavan-eligible “community residences for eating disorder integrated treatment,” an agency official said in an email.