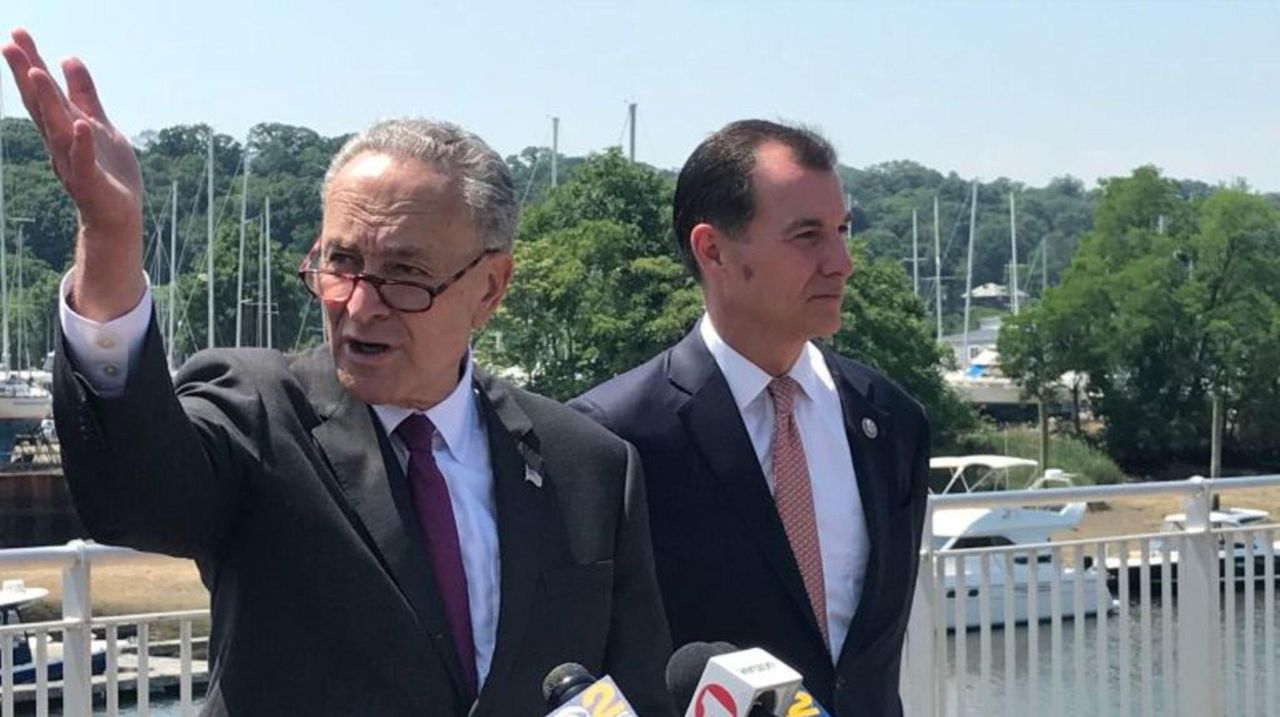 Sen. Chuck Schumer (D-N.Y.) on Monday called on the federal government to extend a Jan. 1, 2019 deadline for Glen Cove to get ferry service operational or repay as much as $16.6 million in federal grants. Credit: Newsday / Ted Phillips

Sen. Chuck Schumer on Monday called for a one-year deadline extension to get ferry service operating at Glen Cove and avoid having to return up to $16.6 million in federal grants.

Speaking at a news conference in front of Glen Cove’s ferry terminal, Schumer (D-N.Y.) said clawing back the money would hurt the city’s taxpayers by making them pay for a facility that is already built.

“This clawback is nasty, and it makes no sense,” Schumer said. “Glen Cove’s hard work and success should be rewarded, not penalized.”

The Federal Highway Administration set a Jan. 1, 2019, deadline for ferry service to begin. The ferry is a key component of the Garvies Point development that is rising along the waterfront amid the dust and concrete of construction sites. The project includes 1,100 apartments and condominiums as well as commercial space that would account for some of the expected ferry passengers.

Schumer said he helped secure the funding for the terminal and dredging of Glen Cove Creek and he would try to persuade federal officials to extend the deadline or write legislation to accomplish it.

“I will not let them take back this money,” Schumer said.

Glen Cove Mayor Timothy Tenke said he is looking for additional subsidies for a ferry operator from state and federal sources. Tenke said the monthly cost of operating the ferry is about $50,000 to $60,000, and the subsidy would need to match that amount, less the revenue from passengers.

Developer RXR Realty committed to paying $1 million over two years to subsidize the ferry service but when that runs out the ferry will still need additional funding.

“I don’t want to put that on the back of the Glen Cove residents to subsidize this ferry because this was basically sold to them that there wouldn’t have to be any additional money coming out of the taxpayer’s pockets,” Tenke said.

Federal Highway Administration spokesman Mike Reynard said in an email Monday that the agency “had a productive meeting with the City of Glen Cove and NYSDOT [New York State Department of Transportation] in which solutions were discussed but right now the deadline remains January 1, 2019.”

Tenke said he planned to meet with federal and state transportation officials over the summer with a plan for the ferry operation.