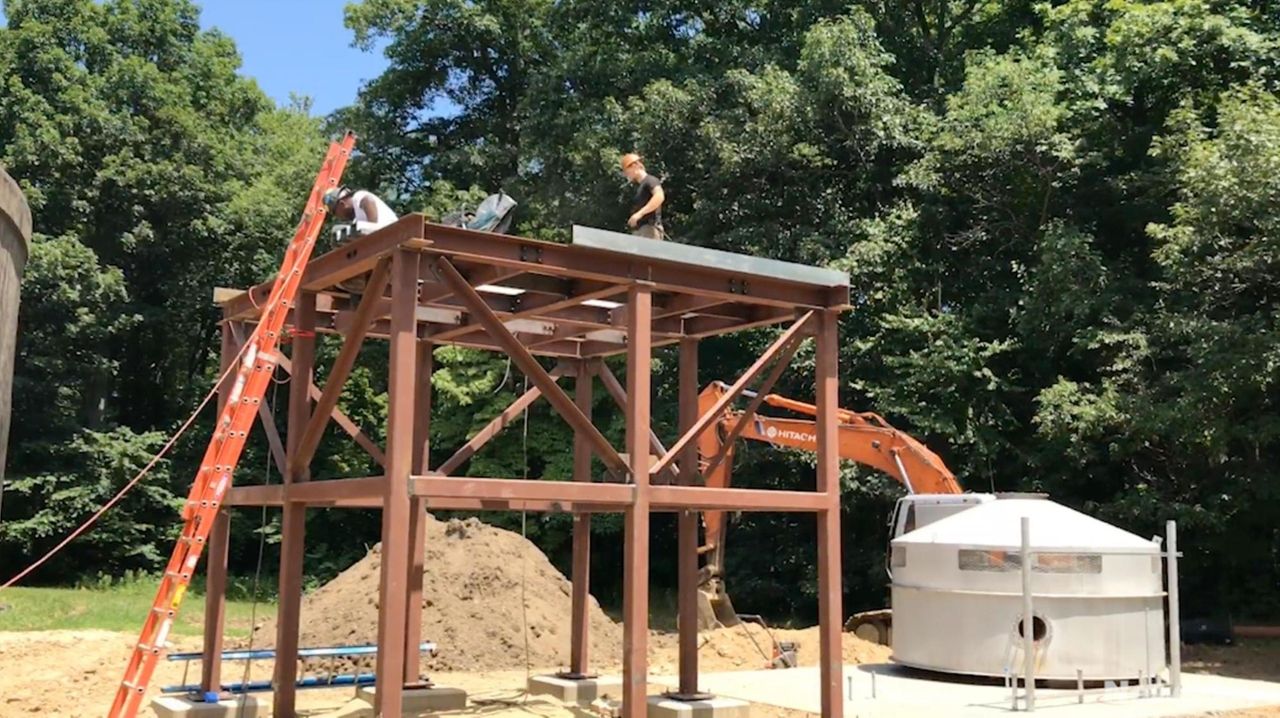 Equipment that blasts air up a tank to strip the refrigeration chemical Freon 22 from Glen Cove’s drinking water is expected to go online in early August, city officials said.

The first of three parts of the air stripper arrived at the city water department’s Duck Pond Road facility last week, when workers also were welding together a steel platform to mount the equipment.

The Nassau County Health Department ordered two of the three Duck Pond Road wells closed — the first, Well 30, in November and the second, Well 31, in January — because of elevated levels of Freon 22. Exposure to high levels of airborne Freon 22 has been linked in studies of laboratory animals to nervous system and heart problems.

Well 30 reopened in late June after tests showed the contaminant dropped to nondetectable levels. Freon 22 levels in Well 31 have varied, sometimes registering well above county limits in regular testing and sometimes below. It remains closed.

The 30-foot-tall air stripper will treat water from both wells, in case Freon 22 levels spike again in Well 30.

After water from the two wells is pumped to the top of the apparatus, air will blast up from the bottom and agitate tens of thousands of small balls comprised of plastic bands. As the water trickles down, the force of the air against the balls strips the Freon 22 from the water and blows it out vents at the top. The water then is piped into a nearby 3-million-gallon tank, from which it is pumped into the drinking-water distribution system.

The airborne Freon 22 “dissipates very quickly once it leaves the water,” Mayor Timothy Tenke said. “It’s not a danger to the community.”

The city spent $858,000 to buy the shell of a used air stripper and accompanying new equipment. The city eventually will install air strippers to cover all three Duck Pond Road wells — the third well has consistently had low or nondetectable levels of Freon 22 — but that will cost up to $10 million, and the city hopes to use the used equipment for up to five years, Tenke said.

City officials had worried about water shortages before the air stripper went online, and during all or part of nine days in May and June, the city paid the neighboring Locust Valley Water District nearly $17,000 for almost 6.5 million gallons of water.

Another of the city’s six water wells has been closed since 2011 because of Freon 22 and structural problems. A custom-built stripper for that well is being designed and is scheduled to be online by late 2019.

Three are off Duck Pond Road: Well 31, currently closed because of Freon 22 contamination; Well 30, recently reopened after Freon 22 levels dropped; and Well 32, which has consistently had low or nondetectable levels of the contaminant.

A well on Kelly Street reopened in May after non-Freon-related repairs.

A well on Nancy Court continues to operate.

A well on Seaman Road has been closed since 2011 because of Freon 22 and structural issues.

On the front lines of omicron: It 'hit us like a tidal wave.'
Forecast: Snow is falling on Long Island
Barge off Long Beach surveys best route for wind-powered cable
Forecast: Up to 3 inches of snow for parts of LI
Wounded toddler the latest victim as NYC shootings spike
Teen testifies Uber driver asked her out for drinks, canceled her planned route
Didn’t find what you were looking for?