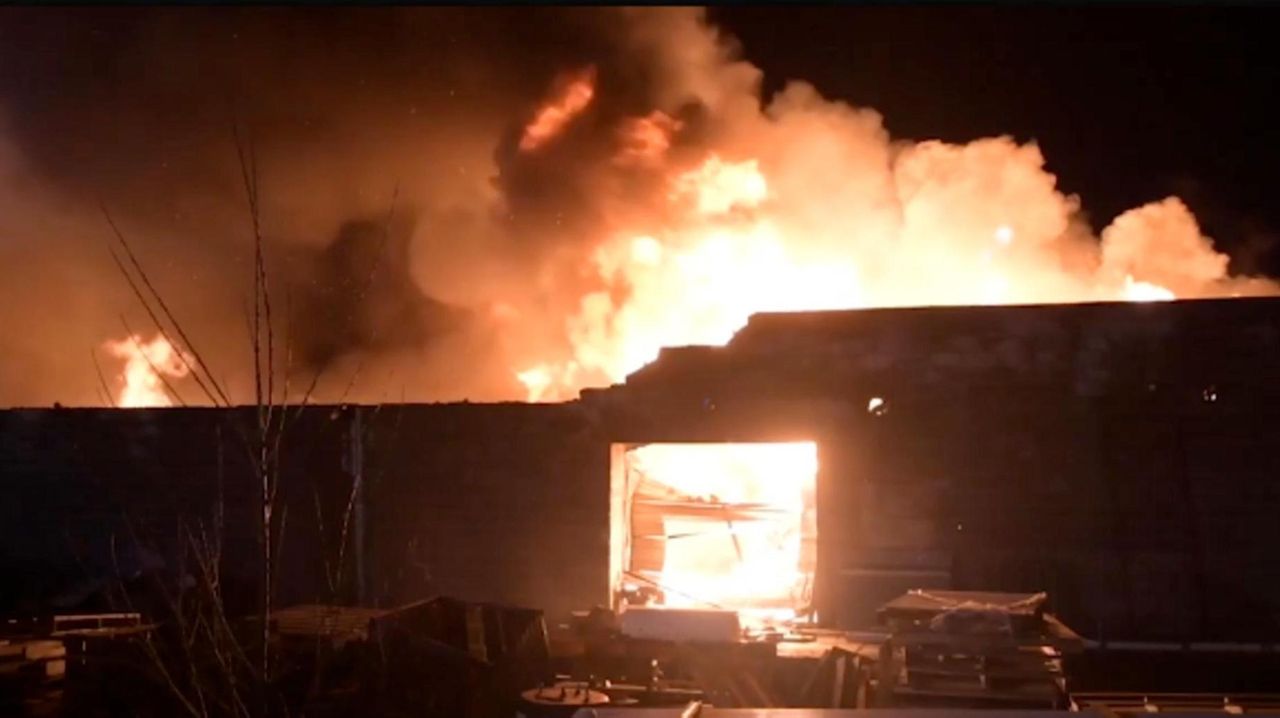 An all-night inferno destroyed a major plumbing business in Glen Cove, despite the overnight efforts of 33 fire departments, one of Nassau County's largest fire responses in a decade, fire officials said Tuesday.

For the first half hour or so, Glen Cove firefighters made a "brave effort" to attack the flames from the inside, but the dangerous conditions intensified due to the gases, melting PVC and other materials, turning the battle into an exterior attack, Uttaro said.

The blaze, which grew to five alarms, started about 10 p.m. Monday in the back loading dock area of the 30,000-square-foot warehouse, fire investigators said, and crews relieved each other until the flames were under control just before dawn.

The business' co-owner, Richard Tenem, 71, watched for hours as a mantra played inside his mind.

"Stop it from spreading — that's what my thoughts were," Tenem said. "Don't travel the whole building."

A few hours later, he lost hope: "We saw the wind change and that was it. Once it started going toward the front of the building, it was sayonara."

Investigators Tuesday night were trying to pinpoint the fire's cause but said the blaze does not appear suspicious. They were unable to get inside Tuesday due to the melted material and a parking lot flooded by efforts to contain the flames, authorities said.

The property was so vast that a fire marshal investigator went up in a police helicopter to take photos and examine burn patterns, the assistant chief fire marshal said.

Firefighters from as far as Bethpage and Freeport had poured in to help, turning the battle into one of the largest in the past 10 years, according to the fire marshal's office.

No one was inside the building when the fire started and one firefighter suffered a minor injury when he tripped, authorities said.

“It’s got a lot of fire load content in there,” Glen Cove Fire Chief Robert Marino said, referring to how much material could burn in the space. “We did the best we could with the conditions that we were met by.”

The building is across from the site for the planned Garvies Point redevelopment project.

Tenem said he had started work there in 1970, soon becoming its general manager, and in 1973, he and business partner Louis Okin bought the company when it was just a quarter of its current size.

"Give a great thank you to the firemen and to the police and to everybody who was there last night," Tenem said Tuesday night, his voice breaking. "It was a long night for them and they're all volunteers and it took them away from their families all night. As far as I'm concerned, buildings can be repaired. Those guys were great.

"Thank God nobody was hurt. Anything can be replaced except for life."

With Ted Phillips and Chau Lam

How the COVID pandemic changed Long Island's towns
1:25
Doctors disagree on whether Cuomo's decision to lift restrictions is wise
1:19
Students organize rally against anti-Asian crimes
3:19
No criminal charges for many drivers in crashes that kill pedestrians, bicyclists
2:22
Long Island towns and cities getting into the weeds on NY marijuana law
Comptroller: Long Beach relying on 'one shot revenues' to balance budget
Didn’t find what you were looking for?