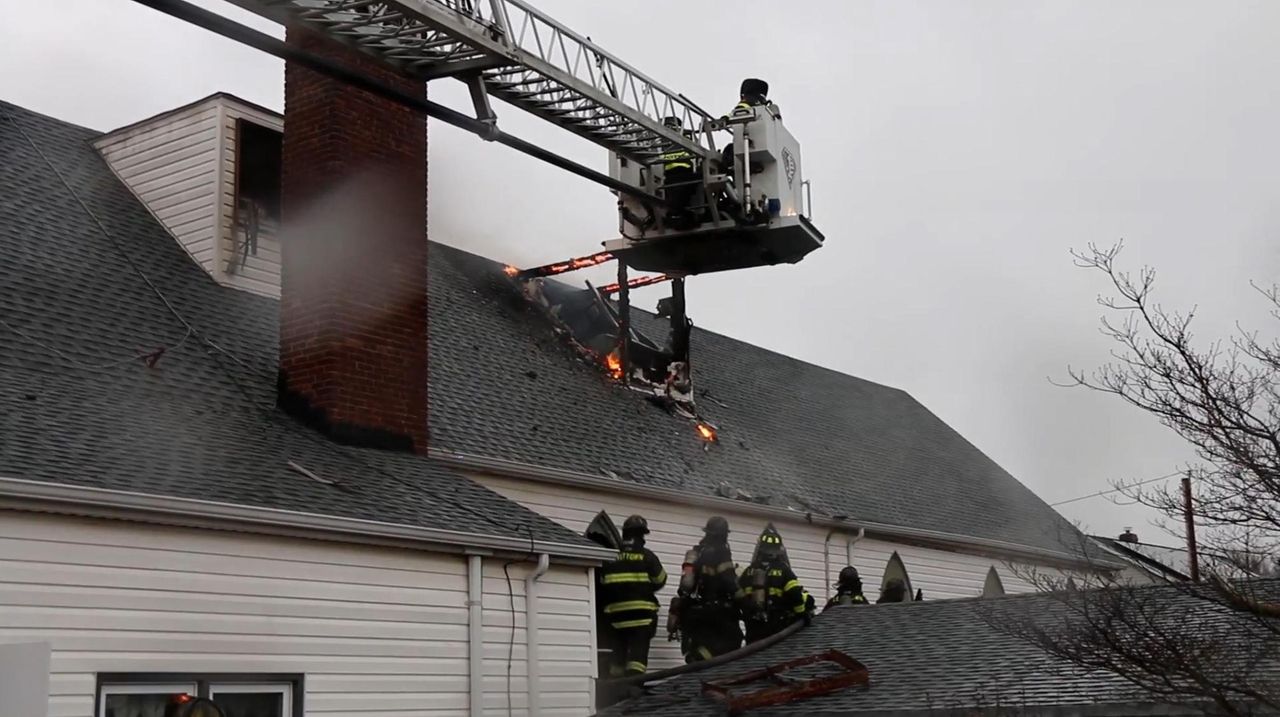 A Christmas Day fire at the Good Shepherd Lutheran Church on Hempstead Turnpike in Levittown was under control Friday afternoon, according to a Nassau police spokesman, and there were no injuries. Here is Newsday's Chelsea Irizarry with the story. Credit: Newsday

A fire badly damaged a Lutheran church in Levittown late Friday morning, devastating parishioners who flocked to the scene and expressed relief because the parish does not hold Christmas Day services.

The blaze broke out about 11 a.m. at the Good Shepherd Lutheran Church at 3434 Hempstead Turnpike, said Levittown Fire Chief Al Williams. Williams said the ceiling fire was controlled within 15 minutes and was contained to the roof and some of the attic. But the church did sustain "extensive" water and smoke damage, he said.

Emotional parishioners said the historic building is about 70 years old. A group of worshippers, some of whom were moved to tears, gathered as firefighters from multiple volunteer departments were assessing the damage early Friday afternoon.

Wendy Lantigua of Merrick, a special events coordinator at the church, said the congregation does not hold Christmas Day services. However, there was an evening service at 6:30 p.m. Christmas Eve and the church’s pastor, Remo Madsen, held an 11 p.m. virtual service Thursday night.

"This is terrible, but it could have been worse," Lantigua said. "It could have been yesterday when we were here. ... There are people in this building every single day. Today is the only day there were not. It’s like a miracle."

"We will absolutely rebuild," she said. "It’s going to take some time because we are self-funded. But we will do it."

Parishioners said the church serves about 250 families. Diane Scrimo of Levittown, who lives a few blocks away, rushed to her church when she heard it was ablaze. Scrimo said her daughter was married there and her three grandchildren were christened there.

She began crying while she stood about 50 yards away from her beloved parish that now had a giant hole in its roof.

"I’m devastated. This has been our safe place since COVID started," Scrimo said.

Williams said it appeared the fire was electrical in nature, but that remained under investigation Friday afternoon.

Williams said of his 30 years with the volunteer fire department, he’s never responded to a church fire on Dec. 25.

"Usually it’s a Christmas tree and things like that," he said. "This is the first time we’ve had a church, Christmas Day."

Paul Egensteiner, bishop of the Metropolitan New York Synod of the Evangelical Lutheran Church in America, said he was headed to his father in-law’s when he learned about the fire. He was only 10 minutes away, so he went to see the damage himself.

"Fires are always devastating. A fire in a church is really disturbing, especially Christmas Day," he said.

Egensteiner acknowledged parishioners are going to need time to absorb the emotional impact of losing their sanctuary. But, he said, congregants will recover and they will always have a home in Levittown.

"God is in the people more than the building," he said. "People are what matter most. Buildings can be fixed or replaced."

Nassau School Notebook: Great Neck South wins Science Bowl
Way to Go! Mineola senior launches college help website
Cuomo: NY pushing toward reopening, agreeing to limit COVID-19 powers
How to get a COVID-19 vaccine appointment
2:29 Looking back one year, 'I see that I am one of the lucky ones'
Alzheimer's Association hosting free virtual seminar on legal, financial planning
Didn’t find what you were looking for?