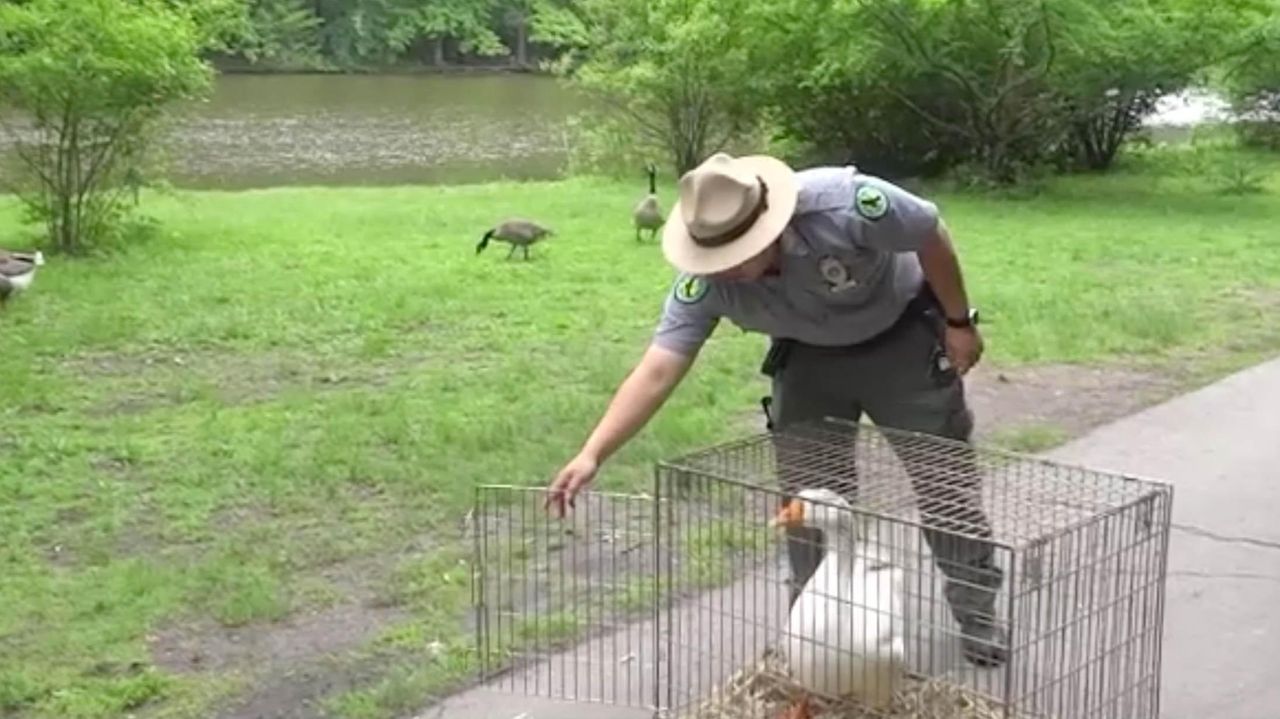 A goose that made headlines when it was found with a crossbow injury was rehabilitated on Long Island and returned to the pond in a Staten Island park where it was found.  Credit: Facebook / NYC Parks

A Staten Island goose happily rejoined his gaggle after a Long Island couple helped him recover from being shot with an arrow.

Video from the reunion showed the white domestic goose, who made headlines in March after he and another goose were seen swimming with arrows sticking out of their bodies, excitedly flapping his wings and honking as park rangers released him to the other geese at Willowbrook Park on Wednesday. The feathered friends honked back.

“Usually they’re peaceable, but they were missing their buddy,” said Cathy Horvath, of Massapequa, who rehabilitated the goose.

7 times animals were rescued on LI From a horse stuck in a pool to ducklings trapped in a storm drain, emergency personnel across Long Island has jumped in action and come to the rescue of many types of animals. Newsday takes a look at some of the more recent animal rescues. (Credit: Newsday staff)

The geese were captured and handed over to the Horvaths for treatment, Bobby Horvath said.

One of the geese, a female Canada goose, was lucky — hers was “was only a flesh wound,” said Cathy Horvath, and she was released after about five days.

The white domestic goose wasn’t quite so lucky, the Horvaths said. He required surgery and two weeks of antibiotics and pain medication to help him recover.

For a time, he lived in a dog kennel in the Horvaths’ living room, where they named him Angel. After his injuries healed, he was allowed to walk around in the backyard.

Domestic white geese are not found in the wild unless they’ve been released by their owners, and they thought he might do well at a sanctuary, the Horvaths said. But the longer the goose stayed with the Horvaths, Cathy Horvath said it became obvious something wasn’t quite right.

“He was depressed. He would sit on the grass with his head down, I had to convince him to eat food and drink water,” she said. “I’d look out the kitchen window and he would just be sitting in the yard in a lump, and it was heartbreaking.”

The Horvaths said they believe the white goose had bonded with two other geese at the park.

With the help of the park rangers, Cathy Horvath said they arranged to take the white goose back to his home. He finally waddled into the pond at Willowbrook on Wednesday.

“I knew they were going to be ecstatic and screaming and carrying on,” Horvath said. “It was so amazing to see them go back to each other.”