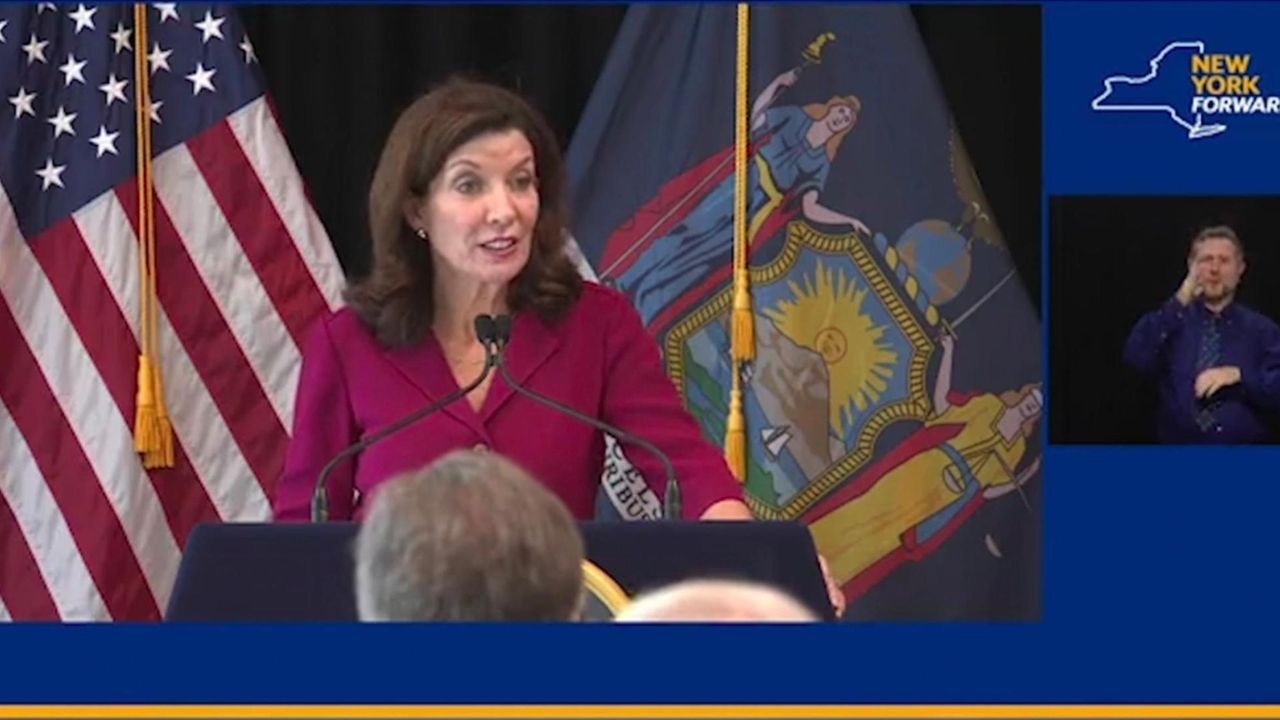 Gov. Kathy Hochul spoke at the opening of the Hempstead Lake Environmental Education and Resiliency Center, during climate week, to discuss the importance of combating climate change head on.  Credit: Gov. Office

The new 8,000 square-foot Environmental Education and Resiliency Center will host classes designed to increase awareness of the warming planet and the growing frequency and strength of storms as a result.

Hochul said this summer’s storm season, in which hurricanes Henri and Ida lashed Long Island, in Ida’s case, as a tropical depression, are reminders that the region needs to be prepared for more intense and potentially damaging storms.

"We all take climate change seriously. It didn’t take Sandy nine years ago. On Long Island we were told Henri would have the same effects as Sandy, but literally days later we got walloped by Ida," Hochul told a room full of masked attendees at the $8.3 million center. "It was an eye opening experience that we’re still vulnerable to climate change and we have to act with that sense of urgency that we could have another hurricane every 10 days instead of every 100 to 500 years."

The center and the overall park project are funded through $125 million awarded to Long Island in 2016 by the United States Department of Housing and Urban Development. Among the project’s aims are to prevent flooding at the park, strengthen the dam at Hempstead Lake and stop pollution from reaching the Western Bays on the South Shore.

"We have a responsibility to protect what we have and what we have been entrusted with for future generations," Hochul told Newsday. "What we saw last time was the resiliency efforts put in place after Superstorm Sandy really held up during the last hurricanes so we’ve made a big difference and it shows it works. We studied the impacts the impacts of Henri and Ida on Long Island and the resiliency really held. We’ve been tested."

The HUD funding is also for storm improvements in Mill River, running from East Rockaway to West Hempstead and Hempstead Lake State Park under the Living with the Bay project.

Work on the Living With the Bay project is moving forward after a New York Supreme Court Judge dismissed a lawsuit by the Sierra Club and the South Shore Audubon Society challenged plans to remove more than 2,000 trees for flood improvements and to remove invasive species.

The education center is centered near new trails to the waterfront in Hempstead Lake State Park and access to kayak launches and fishing piers. It will also host Nassau County police Explorers and can serve as a storm response command post for local disaster coordination for first responders and utilities.

Adrienne Esposito, director of the Citizen’s Campaign for the Environment, said Lake Hempstead State Park is being protected by the improvements, which also include removing plastics from the water.

"There are two things Long Island needs in order to be a sustainable island: clean water and resilience from climate change’s impacts," she said. "This project accomplished both of those goals."