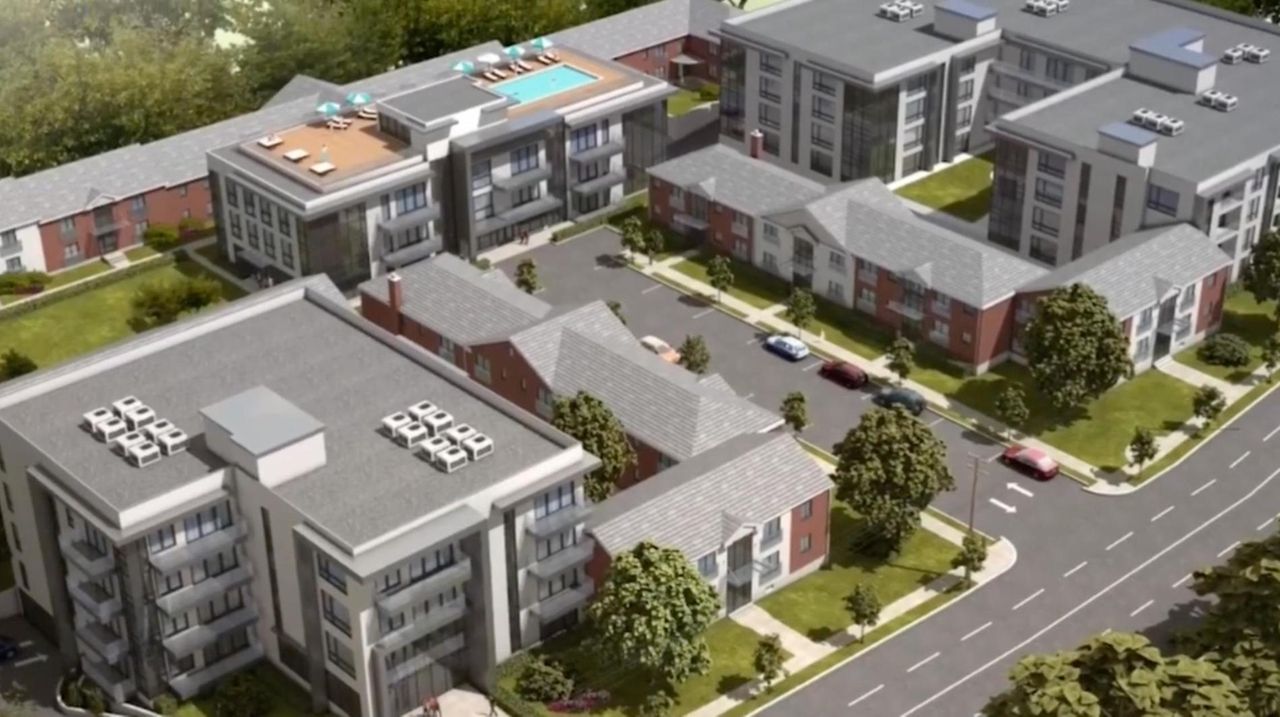 Residents of the Millbrook Court apartments in Great Neck raised questions on Tuesday, May  1, 2018, about the proposed development which will eliminate the number of available rent restricted apartments. Credit: Newsday / Christine Chung

A Connecticut-based developer is proposing modifying an existing rent-regulated complex in Great Neck by removing 34 apartments and replacing them with market-rate units, a plan that has sparked vocal opposition from residents.

Representatives for Northshore Millbrook LLC appeared before the Great Neck village Board of Trustees on Tuesday to request site plan approval, architectural design approval, a parking waiver and incentive zoning relief for the project at Millbrook Court.

The developer’s attorney, Paul Bloom of Melville-based Harras Bloom & Archer LLP, said the proposed development would be “consistent with the character of the neighborhood.”

“They [the existing units] are 1950s construction,” Bloom said. “We are in 2018, it’s time for something to occur, something that is going to enhance not only the value of the property itself but benefit the village by having a modern and also updated development on this site.”

Of Millbrook Court’s 119 rent-regulated apartments, 45 are vacant and are not being advertised for rent. Plans call for the demolition of 34 units across one building and portions of two other structures. They will be replaced with 101 market-rate units spanning three new buildings: two four-story buildings and one three-story building. Upon completion, the number of affordable housing units will be reduced by 29 percent to 85 apartments.

Dozens of residents attended the public hearing to voice their opposition to the project, which they said was already negatively impacting their quality of life. Though the development has not yet been approved by the village, several residents said that their reserved parking spots in one of the complex’s lots were prematurely taken away, forcing them to park farther away. When pressed by Mayor Pedram Bral, company representatives said they would reopen the parking lot until the date for breaking ground draws near.

Renderings show that the three new structures will be wrapped around the existing complex, which has five buildings. Residents said that their views of foliage would now be obstructed. The project’s architect, Mitchell Newman, of Cold Spring-based Newman Design, said there would be about 45 feet between buildings.

“What is the pain and annoyance we are going to have to endure?” asked Barbara Metaxas, a Millbrook Court resident. “How are these people going to live?”

Residents also asked about the tenants still residing in buildings marked for demolition, who have yet to take buyouts from the owners or agree to relocate to other units in the complex. Company representatives said they are in active negotiations with the tenants.

Nassau assessments frozen for second year in a row
Pfizer board member: Likely no COVID-19 shot for kids under 5 until at least late March
PSEG puts its plan to offer $1,000 vaccine incentive on hold
Infrastructure improvements, COVID-19 boost LIRR on-time record
1:26
The school year began with rising hopes of a new normal. Then omicron hit.
1:37
Dogs help sniff out potential trouble at JFK
Didn’t find what you were looking for?