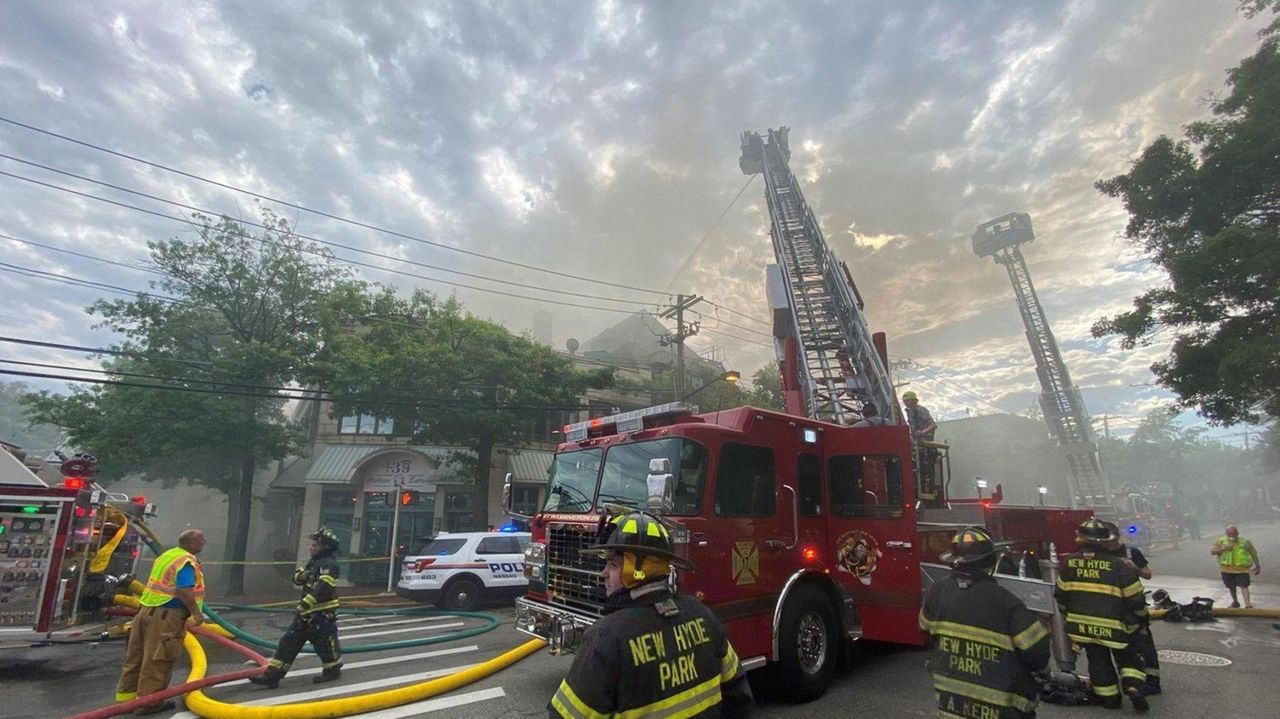 A row of stores were destroyed in a Great Neck Plaza fire on Thursday. Credit: Newsday / Chris Ware

Seven firefighters suffered minor injuries, most related to heat exhaustion, Nassau County Assistant Chief Fire Marshal Michael F. Uttaro said. Three were taken to a nearby hospital, where they were treated and later released. No civilians were hurt, officials said.

The fire, reported in a 911 call at 3:55 p.m., forced the evacuation of a nearby two-story multiuse building that had apartments located over storefronts, Uttaro said. Twelve people were evacuated, including two children.

Uttaro said that building suffered smoke damage, but said residents had since been allowed to return to their residences.

The destroyed stores were located at 7, 9, 11 and 15 Cutter Mill Rd., Uttaro said. The stores are located in one building.

They include Laverne, a Japanese, Thai and French fusion restaurant; Cuttermill Mailroom, a shipping and packing business; and two other storefronts.

A man who identified himself as a manager at the Cuttermill Mailroom said the fire spread rapidly but that employees and customers were quickly ushered to safety.

"It's obviously a terrible situation," said the man who declined to provide his name. "I just wanted to make sure that everyone was safe and that all the customers and employees vacated the premises. Safety is our number one priority."

The cause of the fire, which was extinguished around 7:35 p.m., is not considered suspicious. Uttaro said the ongoing investigation being conducted by several agencies, including the Nassau County Fire Marshal's Office and the Nassau police Arson Bomb Squad detectives, is focusing on a likely accidental rubbish fire alongside the structure. The Nassau County Fire Marshal's Rehab Unit was on scene to assist firefighters but had no role in the investigation, he said.

Uttaro said the storefront building was destroyed, with a roof collapse. Great Neck Plaza officials and other inspectors would determine if it needed to be razed, he said.