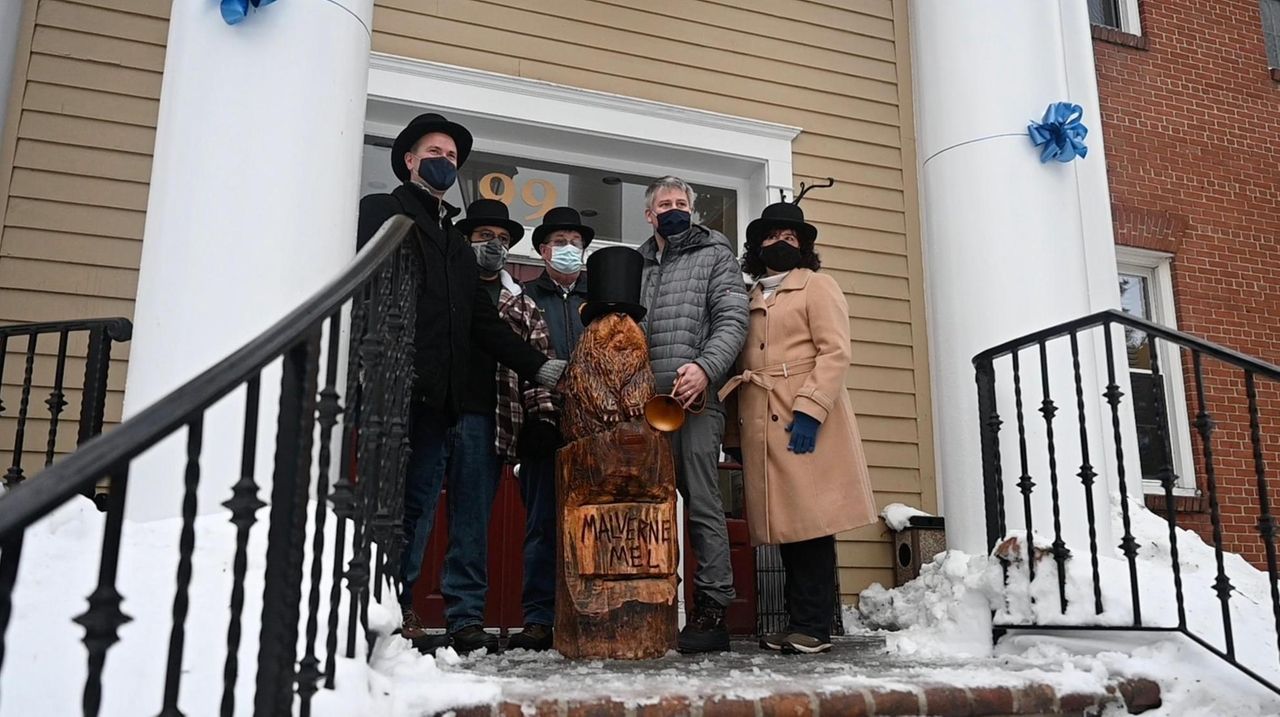 Malverne Mel didn't see his shadow on Tuesday morning, so his prediction is for an early spring. Credit: Newsday / Alejandra Villa Loarca

Malverne Mel, the Nassau County groundhog responsible for determining just how much longer the winter of 2020-2021 will last, was irate but definitive on Tuesday morning.

And Suffolk's Holtsville Hal, possibly in a better mood, at least judging by the photograph of him taken Tuesday morning indoors and posted by the Town of Brookhaven's Holtsville Ecology Site and Animal Preserve, concurred that spring is not so far away.

With Mel safely contained in a crate that faced inward, away from his audience, the mayor of Malverne issued the 26th proclamation from snow-covered steps.

"I, Mayor Keith Corbett, was witness to Malverne Mel who prognosticated to me that upon looking for his shadow it could not be seen so I am pleased to announce to all of Malverne it will be an early spring."

"Mel is very, very angry this morning," the mayor said. "I think COVID-19 and mask wearing has gotten to him just like it has with the rest of us."

Corbett added: "Let's just say the mayor is happy to have his ears from the early morning interval."

The Town of Brookhaven's virtual ceremony was canceled due to the nor'easter, and yet, somehow Holtsville Hal was not deterred.

"In the early morning hours of Feb. 2, Holtsville Hal awoke from his slumber, brushed the snow aside to emerge from his burrow and did not see his shadow, predicting an early spring for the snow-covered Town of Brookhaven. According to tradition, if a groundhog sees its shadow on Groundhog Day, there will be six more weeks of winter weather; if not, spring should arrive early," the site's Facebook post said.

These annual predictions, one of several such traditions, have a comical side, though the Malverne mayor highlighted another aspect of what brings them all out on the second day of February.

"As you can imagine, 2020 was a long year. Malverne, as it always does, sticks together and moves forward," Corbett said.

"We want to make a point to really have our traditions continue so that neither COVID nor snowstorms nor nor'easters are going to stop Malverne today."