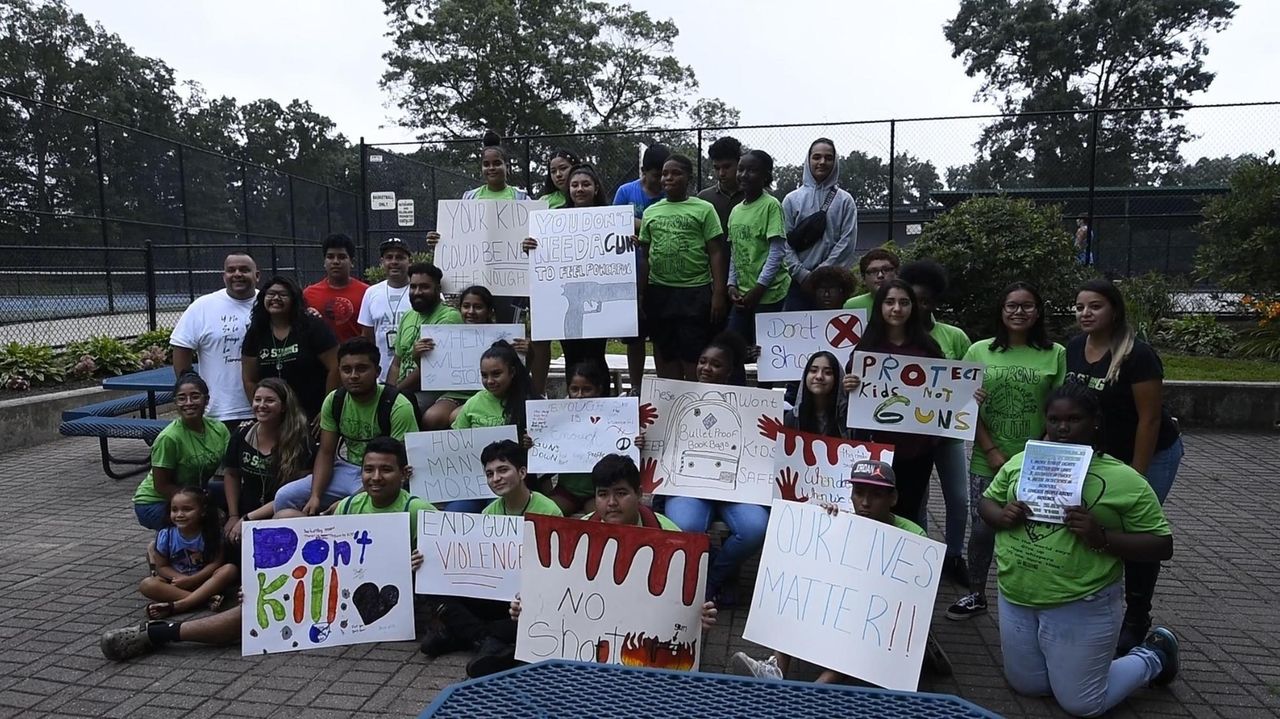 At a rally Wednesday in Old Bethpage, about 150 people, including survivors, activists, faith leaders, community members and politicians, called for political action to end gun violence in the wake of last weekend’s mass shootings in Texas and Ohio that left at least 31 dead. Credit: Johnny Milano

Sergio Argueta imitated the sound of gunshots to a stunned crowd packed into a room Wednesday at Haypath Park in Old Bethpage.

Argueta was one of more than 150 people, including survivors, activists, faith leaders, community members and politicians, at a rally to call for political action to end gun violence in the wake of last weekend’s mass shootings in Texas and Ohio that left at least 31 dead.

“It is not fair that we have kids that walk into schools that look like prisons,” Argueta, 41, said. “It's not fair that people that go out to a Walmart to prepare their kids to start the new school year die.”

Shenee Johnson, 45, was training volunteers in Washington, D.C., at a leadership conference called Gun Sense University on Saturday when news of the deadly shooting at El Paso broke. It was the last day of the conference, and the training was about ways to end gun violence.

“It was heartbreaking,” Johnson said after the rally. Her son Kedrick was 17 when he was killed in a shooting at a high school graduation party in 2010.

She and others with Moms Demand Action, an organization founded by a mother after the 2012 shootings at Sandy Hook Elementary School in Connecticut, marched Saturday night from the White House to Capitol Hill.

Early Sunday morning, another mass shooting was reported in Dayton, Ohio. The two tragedies over the weekend and “every single shooting” that occurs daily remind Johnson of her son's killing.

“For so many years, I've tried to hide my pain and shield my pain from others,” Johnson said in a shaking voice. “But I'm dying inside.”

Juanita Vazquez of Greenlawn wiped tears away as she heard Johnson speak.

“I’m angry at the injustice. … I think it’s time to go to Washington,” said Vazquez, adding she had marched since the 1960s for women’s rights. “I’m getting exhausted. But I won’t stop.”

Rita Kestenbaum, 61, whose daughter Carol was killed by a gunman in 2007 when Carol was a sophomore at Arizona State University, called for a ban on semiautomatic weapons.

Rally speakers called for people to fight gun violence — and the hateful rhetoric that can play a role in perpetuating violence — with love.

“To eradicate hate, we must fight it with love and action,” said David Kilmnick of LGBT Network, who asked people to resist the normalization of gun violence as a way of life. “We say by coming here together that this is not a normal way of life. This is not the America we know, and we stand here today to say: Enough is enough.”

Shania Kirkpatrick, 13, of Uniondale, was one of a group of teenagers who held handmade signs to demand solutions. The teens are members of Argueta’s nonprofit S.T.R.O.N.G., short for Struggling To Reunite Our New Generation.

Kirkpatrick said it has been devastating to hear repeated news of mass shootings in places of worship, malls, clubs, schools and supermarkets.

“I feel like that it shouldn’t be this way,” she said. “It gets tiring cause it’s like: When is it going to stop?”

But she believes she could do something about it. On Wednesday, she began by handing out anti-gun-violence flyers.

“Everybody can do something about it,” Kirkpatrick said. “Just the little things will help out.”